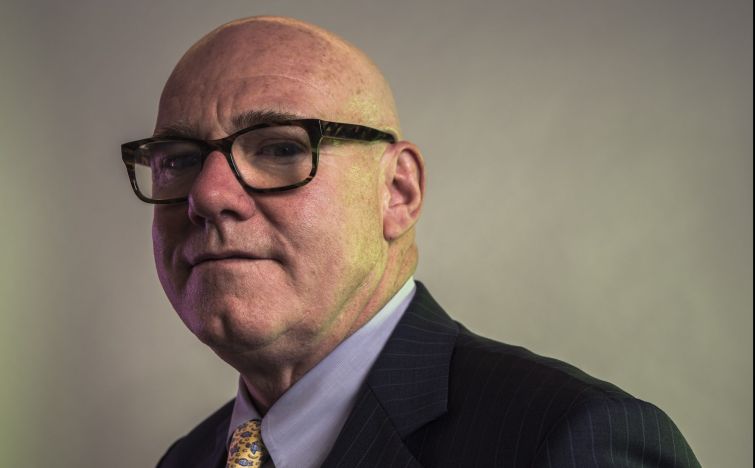 The Executives’ Association of New York City was meeting to select the winners of its annual deals of distinction—given to business leaders and dealmakers from Greater New York who make a significant impact in some way—when the discussion turned to the gala itself. Members were batting around hoped-for attendance figures for the party, to be held at Capitale, the grand event space on the Bowery.

It was then that a cheerful, highly energized Daniel Donnelly, a committee co-chair and the chief executive officer of Donnelly Mechanical, arrived.

That was how it went down, according to Donnelly’s fellow co-chair, Larry Weiss, the president and CEO of office technology and IT solutions company Atlantic, Tomorrow’s Office, who laughed as he retold the anecdote about his friend of 20 years.

That confidence, focus and vision have in part led people to call on Donnelly for help with a myriad of issues, from personal to professional.

But the rest of the time, there’s a mentor, life coach and hypnotist working inside Donnelly.

Jean Lahage Cohen, the executive director of Mentor New York, which supports 600 mentor programs, said Donnelly has “modeled” how to take initiative when it comes to networking. He is one of the organization’s 24 board members. As result, Cohen said, she has been “more deliberate about following up” and “taking more risks” to meet new people. (Donnelly is also a mentor to a ninth-grader through Student Sponsor Partners.)

They had a two-hour coaching session.

“He asked for a brief understanding of the issue and asked a ton of questions and drew out of me the answers,” Sweeney said. “In a very short time, he was able to zero in on the most important aspects.” The conclusion: She needs to grow her sales team and needs to connect with “the right people.”

Both Sweeney and Donnelly were members of Vistage International (Sweeney still is), an executive coaching organization for CEOs and executives, but they met for the first time last week.

Donnelly isn’t just an armchair coach. He went through a certified coaching training program at Accomplishment Coaching last year. And the year prior, he was trained as a clinical hypnotist. His specialties are meditation and manifestation.

The coaching skills come in handy, Donnelly said, as a member of the Mentor New York board and when working on fundraising initiatives. He uses the hypnosis primarily on himself to affect change.

He does not hypnotize clients, he said, and does not charge for hypnosis or life coaching sessions. (During a recent interview with Donnelly, this reporter sought to be hypnotized to be cured of an overwhelming Diet Coke habit, but due to time constraints, Donnelly was only able to walk her through the steps of how it would be done. It heavily involves visualization and breathing.)

Donnelly’s day job, however, is pretty significant all on its own. He works with some of the city’s biggest landlords from Rudin Management to Tishman Speyer to Brookfield Property Partners to Durst Organization. He has been tasked with working on numerous major projects, including Carnegie Hall and the New York Stock Exchange.

Ed Bohlke, Donnelly’s executive and life coach, said over the last year and a half of working together, Donnelly, keeps growing and has “create[d] more and more extraordinary results in his work and personal life.”

That has been borne out in his client’s company’s bottom line, the coach said.

This year, Donnelly Mechanical’s revenue will reach $125 million, Donnelly said. Last year, it was $105 million, and the year before that it was $110 million.

The company has a great retention rate and was named by Crain’s New York Business in 2010 as one of the “best places to work.” Many employees have been at the company for over 15 years.

Michael Klingher, the chief operating officer at Cauldwell Wingate, which provides preconstruction, construction management and general contracting services, became friends with Donnelly about 11 years ago. They converted the old Central Savings Bank building at 2100 Broadway at West 73rd Street from commercial to residential.

“I was the project manager, and Dan was overseeing the mechanical portion of it,” Klingher said. “That’s where we met and became friends as he guided and helped me through that project.”

Klingher described it as a “very difficult project” with “a lot of redesign.” This cemented their bond.

Ironically, Donnelly said not to call him if you need your air-conditioner fixed. He’s an air-conditioning engineer, after all, and, pun intended, just “a cool guy.”

He got into the air-conditioning business because of an appreciation that stems from scarcity.

Growing up in Whitestone, Queens, the now-60-year-old Donnelly’s family was “dirt poor” with no air-conditioning until he got into high school. At that time, his family installed a window unit in one of the bedrooms. In the summers, it became a race for the kids to see who could get to the bedroom first.

Donnelly’s first job was as a newspaper delivery boy. As a kid, he also stocked frozen food at ShopRite, flipped burgers at McDonald’s and restocked milk at a dairy barn. He told Michael Stoler during an interview on Building New York: NY Life Stories, “Little did I know sitting in a freezer for eight hours a day would define my job as an engineer.”

Donnelly joined the U.S. Army Reserve and became a certified welder. He landed a job at a company in Long Island City, Queens that made specialty piping products because he loved that he could create welding products. He attended Queensborough Community College at night for design and mechanical engineering and eventually got his bachelor’s degree from City College of New York.

Donnelly learned the mechanical engineer business while working at A.D. Winston Corp., which installs, services and maintains industrial air-conditioning, heating and ventilation systems throughout the tri-state area. When the owner didn’t make him a partner, Donnelly decided to set out on his own and create a HVAC service business.

Founded in 1989, Donnelly Mechanical has grown to 165 employees, 90 of whom are technicians.

Donnelly’s five partners were neighbors, or in some way connected to him through friends.

Caterina Asaro, a vice president of construction and a partner at Donnelly Mechanical, started working at the company as an adolescent, when she rolled change. She continued there through high school and college, at which point Asaro thought about changing the direction of her career.

It was Donnelly that convinced her to stay the course.

Donnelly looks out for his partners, who each have a 15 percent or smaller stake in the company.

Last month, he hired Bohlke to coach each of the partners.

“Dan’s just into these things and helping people be the best you can be,” Asaro said.

When it comes to power efficiency in buildings, Donnelly said it’s his “favorite subject.”

He is happy about Mayor Bill de Blasio’s 2014 commitment to reduce the city’s greenhouse gas emissions by 80 percent over 2005 levels by 2050 because “it focuses on energy efficiency and sustainability through carbon reduction strategies.”

According to a press release from the mayor’s office at the time, “Nearly three quarters of New York City’s greenhouse gas emissions come from energy used to heat, cool and power buildings.”

While Donnelly said the air-conditioning business is 10 years behind other tech industries, he’s bracing himself for the future.

He has acquired a legionella testing company, NYC Cooling Tower Inspections & Services, and is an investor in EliteCAD Designs, which provides 3-D modeling for fabrication, coordination, logistics and scanning of commercial mechanical systems. Donnelly is also an investor in LogCheck, a mobile app which helps system administrators stay on top of routine maintenance tasks, inspections and meter readings. (Among his more unorthodox investments, Donnelly and friends, including Weiss, have put money in a company called Tikun Olam, known in the United States as TIKUN, which produces and supplies medical cannabis.)

Armed with the 3-D modeling, projects can be done “so much faster and cheaper,” Donnelly said. Indeed, he said, as a result of using the technology, he is saving 25 percent on field labor and is increasing the amount of work that can be prefabricated by 33 percent.

“We are poised for the next level of technology,” Donnelly said. “I have to stay ahead so 10 years from now I’m not a fax machine.”

The recently divorced Donnelly splits his time between Midtown East and Garden City, Long Island. He has two grown children, ages 31 and 33. In the fall, Donnelly said he’ll be moving into his “dream building” at 252 East 57th Street, one he has not worked on.

He plays basketball three times a week and does Bikram Yoga two times a week. He enjoys golf and has a 1,000-bottle wine collection.

With all of the personal development work he has done, what type of people does Donnelly like to be around?

Those who are “authentic and self-aware” and take responsibility for their actions.

Donnelly said that he is an ENTJ (extraversion, intuition, thinking, judging), if you consult the Myers–Briggs Type Indicator. ENTJs are charismatic and strong-willed leaders but poor listeners.

That is an issue Donnelly has tackled with the help of Bohlke and his coach, Carolina Aramburo.

“It’s something we specifically worked on—the listening thing and he embraced it,” Bohlke said. “In the beginning, he had no idea that he wasn’t a good listener. It was one of those ‘holy shit’ moments.”

Donnelly interviewed all of the people in his life about the issue.

“[He] was really open to feedback, whatever they had to say,” Donnelly’s coach said. “Good, bad, ugly. That level of willingness to embrace feedback is a sign of somebody who is a big person.”