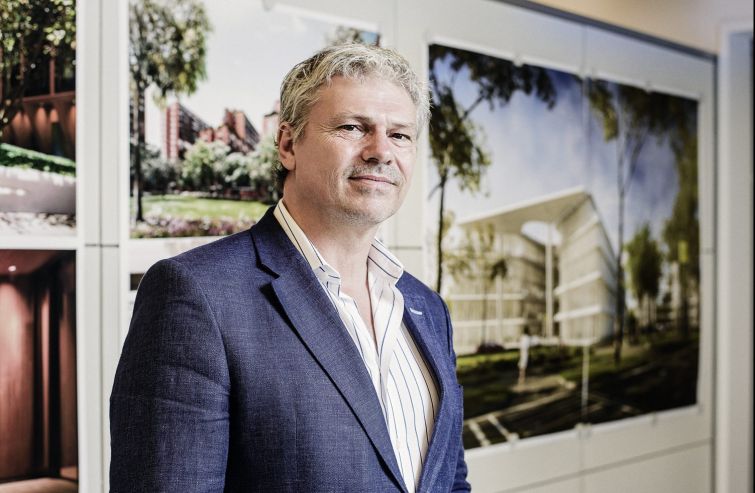 London-born architect Brandon Haw began his career with Skidmore, Owings and Merrill in New York before joining Foster + Partners for what would be a 26-year run.

Evolving to senior partner and director, Haw oversaw prestigious projects there including Hearst Tower in New York, Faena House in Miami and the Commerzbank Headquarters in Frankfurt, Germany. In 2014, Haw, 56, branched out on his own, taking space in the Seagram Building for Brandon Haw Architecture.

Haw spoke with Commercial Observer about his life in architecture and his philosophies of design on a Saturday afternoon from that very iconic office building.

Commercial Observer: How well did you know Norman Foster?

Haw: When I first started at Foster + Partners in 1987, there was around 30 people there. In over 26 years, it grew to over 1,200 people. When I first met Norman, I think he was 52. He was an amazing inspiration in the way he built the ethos of the office—creating an office that could grow and yet maintain quality.

What was the secret of his success?

Surrounding [himself] with good people, creating good camaraderie and creating a disciplined approach to design. That, for me, is a secret I take with me in the growth of this practice. If we have clear principles of what we’re doing, it helps guide authenticity in the design process. It jived with my own philosophy of architecture—the reason I [decided to become] an architect and designer at 17 years old or so, after talking with my father. My parents were both artists. [I was deciding on] art college, and my father said, “That’s fine, you’ve grown up with art.” We were drinking wine at the time. “We can look at that picture on the wall. It may move us intellectually and in our soul, but if we don’t like it, we can turn our back to it and walk away. That’s the nature of art. But if we’re drinking our glass of wine and the wine falls out the side of our mouth or if this table is too high compared to the chair, then you know there’s something wrong with the design. If we extrapolate that to being in a hospital bed that’s dark and dreary with no views and bad air, or a school or home with the same conditions, or an office or even a city, then that’s a human condition you have to deal with. You can’t walk away from it.” He convinced me during that discussion—it’s all about the functionality of design. If you can create better places for people to live, work and play and lift the spirit and affect the soul for humanity, then you’re doing a really noble art.

You were shown an expansive worldview at a very early age.

My father was a very intellectual and thoughtful person. He was a minimalist and conceptual artist, so we grew up with the Whole Earth Catalog and Bucky Fuller [the American philosopher]. My first job at 13 years old was doing waste paper recycling. He bought an old van, and we created all these flyers, and we went around the whole of our community in South England saying, “Next Saturday, bundle up your newspapers with string, and we’ll come and collect them.” This had never been done before. So in order to earn holiday money, because I love to travel, he said, “Help me do this.”

Tell us about the trajectory from Skidmore to Foster to your own firm.

I love traveling. I came to the U.S.A. and applied to different  colleges. I was living in New York at the time, and the closest was Princeton [University]. After Princeton, I worked with SOM, because I really enjoyed Manhattan. When I went back to the U.K. in 1987, with SOM, I bumped into some old college friends who were working with Norman. They said, “Come over, see what we’re up to.” I said I’d do it for a year, because I knew I’d probably want to go back to the states again. That was the beginning of [my time at] Foster + Partners. I found that the ethos Norman was growing, which was this adherence to functionality and yet creating beautiful buildings out of that process, resonated with my indoctrination from my father—that it starts with building great buildings, cities and environments, and designing good objects.

What was the first project you saw of his that drove this home?

One memorable point was going to see Stockley Park. It’s an early project, a three-story office building in an office park just outside of London. What struck me was the importance and simplicity of scale. The entrance canopy was three stories up in the air. But it created this amazingly simple emblem of where the front of the building was. It wasn’t going to keep you dry—that wasn’t the point. It had a different function. The simplicity of a few moves to do with scale was one of the more profound observations of Norman’s early work. That’s always been with me. Because of that conversation with my father, I don’t believe in architecture as a style. People might say, the architecture of Foster + Partners, you can always recognize it. But you recognize it for its quality, not its style. One building is very different from another, depending on its context.

So you wouldn’t consider yourself to have a signature style?

No. I don’t really believe in style. It goes back to the functionality of where a project is and the context of the project. In Miami, for instance, [the late architect] Morris Lapidus said that Miami architecture is the architecture of joy. I always liked that, because it’s a very free statement. If you’re designing a condo on the beach in Miami, why shouldn’t it be joyous? We all would love to have a condo building overlooking the beach. To celebrate the wind and views and the sun path and the sunsets, that creates an architecture of joy—something specific to its place. I don’t believe in style, but I do believe in context, and what the functionality of a building needs to be. When I say functionality, that doesn’t just mean how you touch, feel and use a space. It has functions of joy, of the spirit, of the context of history. Those are equal functions.

How did your own firm come about?

I passed my 50th birthday and had all those things that play on your mind. This [firm] started July 1, 2014, so July 1 will be our anniversary. I got to this point where I thought, “If I don’t do it now…” I wanted to go it alone before I got much further. It’s as simple as that.

Were there specific types of projects you wanted to work on that you weren’t able to do at Foster + Partners?

People often say to me, “what’s your specialty?” Well, I don’t have a specialty. It’s all design. I was just with some people talking about a small airport. They said, “Have you done an airport?” No, I haven’t. I worked in a practice that did many airports. If you gave me an airport tomorrow, I’d know exactly what to do. The first airport Fosters + Partners did was [London] Stansted [Airport]. They hadn’t done an airport like that before. No one else had either, because it reinvented how people looked at airports in many ways. For me, that story proves that every architect starts somewhere. It’s not that you need to specialize. It’s how you deal with the problem and how you approach the design process.

What’s the most difficult project you’ve ever worked on?

They’re all difficult. The Commerzbank in Frankfurt was very challenging, because it was so constrained and very far reaching. It has gardens that spiral around all four floors on three sides of the building, creating green urban space. It’s still one of the greenest skyscrapers built as a commercial headquarters building. We were stationed in Germany with a very tight deadline, and it was a complex project all in the German language. So that was very challenging. I’m working in Colombia, and the challenges of working in Latin America are singular. The architect’s work doesn’t stop at the drawing board. Often in Colombia, it does. The architect finishes his drawings, and the contractor takes over. When you go on site, people are making it up as they go along. They’re not used to an architect like us coming along and saying, “We want to see this, we want to know how it goes together, we want to have the bolts hidden,” things like that. They have been completely aghast, and you can tell they’re thinking, What a pain in the ass. But what you’re actually doing is finding they’re rising to the challenge of creating better quality in the detailing.

They’re used to just ignoring the architect and winging it on their own?

Yeah. Literally. The architect gets called, and he winds up drawing on the wall. You’d get phone calls from a construction site: “Brandon, can you please come down here because we don’t know how to detail it?” It’s because they didn’t do the shop drawing process. It’s very common in Latin America not to have shop drawings.

So the plans are more of a suggestion.

Yeah. And the contractor sort of gets on with it.

You’ve worked all over the world. What city is doing the most interesting things in architecture?

I really enjoy the work of Studio Mumbai in India. They created an artisanal studio—they’re using artisans, brick makers, tile makers, carpenters, and they’ve fused the building processes with the design process, creating a very beautiful architecture out of that fusion. If I think of one instance of something being inspirational, it’s that.

We’re having this conversation in the Seagram Building. What are your thoughts on it?

When I first came to New York, I was 18 years old, a first-year architecture student, and I came to look at the Seagram Building. It was almost a pilgrimage. [The late German-American architect] Mies van der Rohe [who designed the building] talked about functionality—less is more. I looked up at it, and I remember looking at all the lights and the bronze detailing, and thinking, “Wow, wouldn’t it be great to get in there one day and look around”—it was [literally] a very hard building to get into. So years later, being the senior partner responsible for the Hearst building with Foster and looking at the classic buildings of Manhattan, I thought, “Where can I set up an office after being in the Hearst building?” There was always a comparison between the Seagram and Hearst buildings. It’s completely by chance that we found the opportunity through [building landlord] Aby Rosen, who was a tremendous support when I first was looking for some space. We managed to work out an arrangement, and here we are. It’s a dream come true, and it only happens in New York. That’s why I’m here.