Massey Noncommittal on His C&W Future, Could Run for Mayor Again 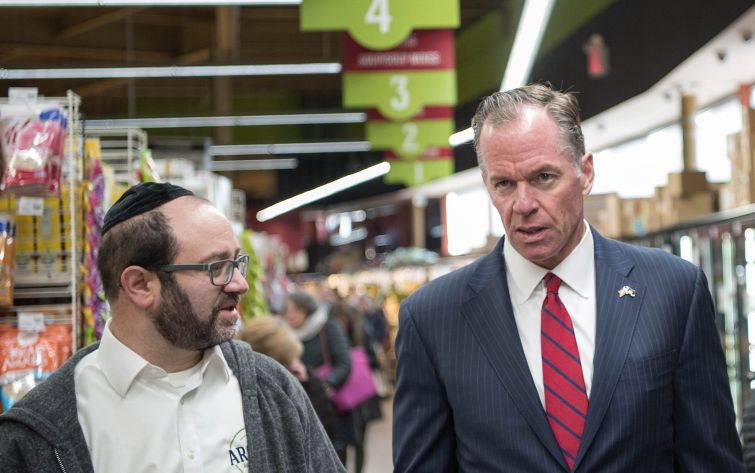 On the day that he ended his campaign to replace Bill de Blasio as mayor of New York City, Cushman & Wakefield executive Paul Massey told Commercial Observer that he would not rule out running for office again while also casting doubt over his future with the commercial real estate brokerage giant.

Massey announced today that he was calling off his bid for the Republican mayoral nomination, citing the “extraordinary” challenge of raising enough money to defeat an incumbent Democratic mayor, as CO reported earlier today.

He echoed that rationale in an interview at the campaign’s headquarters at 35 East 21st Street, saying that the campaign would have needed to raise “millions” more than it had generated in order to genuinely threaten de Blasio and that he “just didn’t see the path to raising it.”

“I think [de Blasio] is beatable and I think our team was getting more and more skilled at what we were doing, and so was I,” Massey said. “The fundraising [challenge] was real and we had to face the reality.”

While Massey’s $1.6 million fundraising haul over the second half of 2016—fueled by support from some of the real estate industry’s biggest players—saw him out-raise the mayor by $600,000 in that time, the candidate had seen that advantage over de Blasio dwindle in recent months. The mayor raised over $100,000 more than Massey in the most recent campaign filing period, which spanned early March to early May.

Massey said the final decision to terminate the campaign was made yesterday, noting that he was “all in up until just a few days before yesterday.” He attributed the slowdown in fundraising to “a confluence of things,” including unfavorable polling data and the campaign “not catching fire early enough.”

While noncommittal about his future, Massey described the campaign as a “positive” experience in the realm of politics and said he has not ruled out another run for City Hall in the future.

“I feel like we’re a little dangerous now,” he said. “If we ever did this again, our execution would be fantastic… I know I still would be enthralled with the job of mayor. Nothing’s dissuaded me from that.”

But he added that he had not decided what, exactly, that future will look like—including his role at C&W, which he complimented for “allow[ing] me to [run for office].”

“I’m going to be the way I usually am and very purposefully go explore a whole bunch of things,” he said. “I’m going to have a long talk with [C&W Tri-State Region President] John Santora about what the right future is for me… John and I will talk about that.”

Representatives for C&W did not return requests for comment on Massey’s withdrawal from the mayoral race.

Massey’s decision to pull out of the race came on the day he debated his main Republican mayoral challenger, New York State Assemblywoman Nicole Malliotakis, at a Midtown breakfast forum. “I had made the decision to [withdraw] prior to the [forum],” he said, noting that he “went through with [the debate] out of respect for both Nicole” and the event’s organizers.

The debate saw Massey raise eyebrows among observers due to comments he made about the city’s crime statistics, in which he said that “some of our city’s greatest authorities on public safety are saying the [crime] numbers are being fudged.”

Massey attempted to clarify his statements to CO.

In a statement this afternoon, Malliotakis said Massey’s departure from the race “clears the field in the race for mayor.” Massey said he had not made a decision on whether or not to endorse Malliotakis’ candidacy.