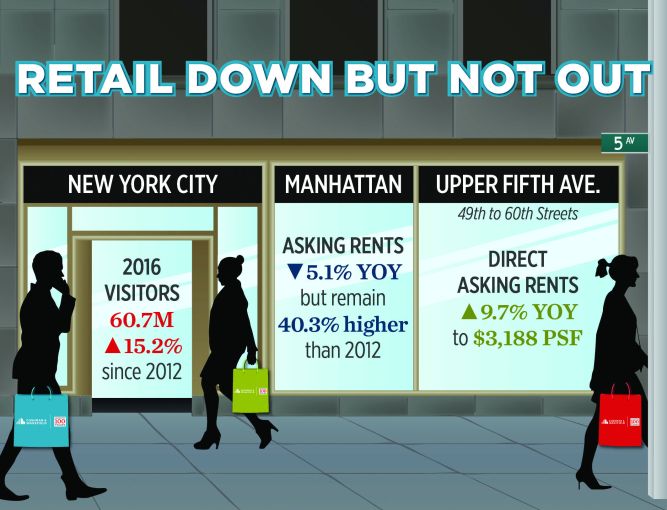 As retail real estate professionals gather at this year’s ICSC (International Conference of Shopping Centers) RECon in Las Vegas, there is bound to be discussion about the question on everyone’s mind:

Regardless if one’s shopping is done in store, online or both, there will always be a retail store presence. As a father who purchases video games for my two sons, I have found myself in five stores over the past two months purchasing the latest releases, as well as ordering an older, hard-to-find game online.

The decline in asking rents and increase in availabilities for New York City storefronts over the past year appear more drastic than they really are. Although asking rents are down year-over-year in nine of the 11 statistical submarkets tracked by Cushman & Wakefield, asking rents are up significantly from five years ago. Combined, asking rents for these submarkets are down 5.1 percent from one year ago but remain 40.3 percent higher than in 2012. The five-year growth rate for Manhattan office asking rents has not been as extreme, because it’s only gone up 23.2 percent.

Despite the decline in retail rents around Manhattan, tourism throughout the city continues to grow, surpassing 60 million visitors for the first time on record. With 60.7 million tourists flocking to New York City in 2016, visitors have increased by 15.2 percent since 2012. One area that seems to benefit from the increase in tourism is Fifth Avenue, as tourists covet shopping along the corridor from 42nd to 60th Streets, seeking retail destinations like the Apple store, Rockefeller Center, St. Patrick’s Cathedral and Trump Tower’s Tiffany & Co. It has become a mecca for midlevel soft goods shopping for athleisure wear—like Nike and Under Armour—compared to the luxury stores that once lined Fifth Avenue, which now consider Madison Avenue as an alternative.

The increased foot traffic along Fifth Avenue has helped the Upper Fifth Avenue corridor (49th to 60th streets), as direct average asking rents for ground floor space are up 9.7 percent year-over-year through the first quarter to $3,188 per square foot. This retail corridor is also one of only three submarkets that had a drop in vacancy since the third quarter of 2016, with direct vacancy down from a recent high of 13 percent to 10.2 percent during the first quarter of 2017.