What Retailers Can Learn From the Music Industry’s Meltdown 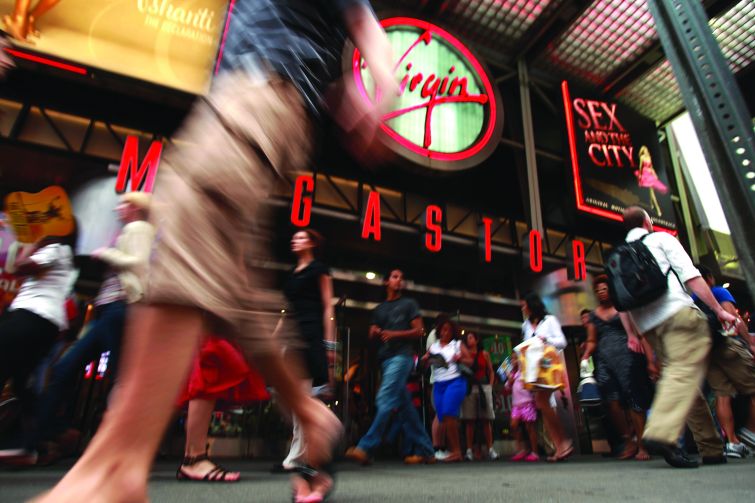 The Virgin Megastore in Times Square closed in June 2009, as the chain shuttered all 23 of its North America locations. Photo: Spencer Platt/For Getty Images Rebecca Baird-Remba

By any metric you like, retail is having a Falcons-in-the-Super-Bowl kind of year.

In April, Bloomberg reported that “year-to-date store closings [nationwide] are already outpacing 2008,” based on information provided by Credit Suisse, with “2,880 announced so far this year.” Last year at this time, the number was just 1,153.

Since Jan. 1, companies that have announced bankruptcies include Payless, HHGregg, BCBG Max Azria, Eastern Outfitters, Wet Seal and The Limited. Bebe announced it would close all 168 of its retail outlets, and other retailers closing quite a few include American Apparel, Macy’s, Sears and J.C. Penney. Using data from CoStar Group, Bloomberg wrote that at the current rate, “more than 10 percent of U.S. retail space, or nearly 1 billion square feet, may need to be closed, converted to other uses or renegotiated for lower rent in coming years.”

“I’ve been doing this for a long time. I was just driving up and down Madison Avenue and Third Avenue in the last few weeks, and I’ve never seen so many vacancies in my life,” said Bruce Shepard, a partner at SCG Retail. “It’s a scary world, because you just don’t know what’s going to happen.”

Part of the reason for the retail sector’s decline nationally is that malls have been vastly overbuilt. Another culprit is that retail chains took on too much debt. But consensus places most of the blame squarely on e-commerce—specifically, Amazon.

However, there is one business that had a 15-year head start on dealing with retail’s current e-problems: the music industry.

The 1990s were an exciting time for music companies and record stores, as the popularity of the then recently introduced compact disc had a generation of music fanatics willing to repurchase their entire music catalog for the higher-quality sound.

Then the roof caved in.

Younger fans learned about file-sharing services like Napster and LimeWire in the late 1990s and early aughts, and iTunes was introduced in 2001. Suddenly, music buying at retail fell off a cliff. In 2006, The New York Times, citing the Recording Industry Association of America (RIAA), reported that “the compact disc market fell about 25 percent between 1999 and 2005.” More remarkably, the Times noted that, according to market research firm Almighty Institute of Music Retail, one-quarter of the country’s 3,600 independent record stores had closed just since 2003. ABC News has reported that between 2000 and 2010, record store sales declined more than 76 percent.

The decline was disastrous for the industry, which enjoyed boom times in the 1990s. According to a 2010 CNN article, citing data from Forrester Research, revenue from U.S. music sales and licensing in 1999 reached $14.6 billion. By 2009, that figure had plunged to $6.3 billion. As profits from recorded sales fell, artists focused more on touring and merchandise to make up the difference, and record companies responded accordingly, signing artists to contracts that, for the first time, involved themselves in those areas—including taking a share of those profits—in addition to investing in their recording careers.

But it was the big Sam Goody’s and the smaller mom-and-pop record shops of the world that bore the brunt of the carnage.

While stores and sales disappeared, the remaining customers grew suddenly older. Young people, more adept at navigating the new online terrain, abandoned record stores en masse. The Times noted that in 1996, 15- to 19-year-olds bought 17 percent of recorded music; by 2005, that was down to 12 percent.

The present looks equally dire for the music industry and not just for the brick-and-mortar part of the business. Last July, Spin reported that based on sales data released by Billboard and Nielsen Music, 2016 was shaping up to be “the worst year for overall album sales since Nielsen started keeping track in 1991.”

Retail broker Jeffrey Roseman, an executive vice president at Newmark Grubb Knight Frank, worked on U.K.-based record store chain HMV’s U.S. expansion in the 1990s. He said that at the time, no one saw the disaster coming.

“Online was the furthest thing from my mind,” Roseman said. “I spent so much time with [the HMV people], I probably would have had an inkling if they were stressing out about it.”

In the first few years into the millennium, everyone in the music business was mired in the catastrophe. As sales plummeted and stores closed, the industry began a series of scattered, desperate, often misguided attempts to stop the bleeding.

The most ill-advised was when the RIAA, the music industry’s trade group, filed lawsuits against fans who shared music on peer-to-peer file-sharing networks. According to the Electronic Frontier Foundation, an organization dedicated to defending civil liberties in the digital world, by 2008, the industry had “filed, settled or threatened legal actions against at least 30,000 individuals…[including] children, grandparents, unemployed single mothers, college professors, a random selection from the millions of Americans who have used P2P networks.” If there was a dumber, less-effective strategy for winning back record buyers and ensuring their loyalty, no one found it. Needless to say, it did not come close to solving the industry’s piracy or e-commerce problems.

Labels scrambled to compete via technology they seemed to barely understand.

“There were a lot of experiments with formats to try to come up with different things,” said Chris Brown, the CFO for the Maine-based, 12-store Bull Moose record store chain.

“We had a summit meeting with BMG,” he recalled of the music conglomerate. “The company’s president held up what looked like a memory stick. He said, ‘People like MP3s, so we’re going to sell them MP3s on this memory stick here.’ It was maybe a one-inch square. They saw that as replacing the cassette. I never heard about it again after that meeting.”

Brendan Toller is the director of the 2008 documentary, I Need That Record: The Death (Or Possible Survival) of the Independent Record Store.

“The way they decided to react to these file sharing networks was crazy,” he said, invoking the RIAA lawsuits, as well as how they “even put viruses on Neil Diamond and Sarah McLaughlin CDs.” Toller is referring to antipiracy software Sony BMG placed on some of its CDs that weakened computers’ defenses against viruses or hackers.

Ed Christman is a veteran reporter for music industry bible Billboard who previously wrote for Shopping Centers Today. Christman recalled a confusing effort by the major record labels to become direct sellers, which never got off the ground.

“Each major [label] was going to have its own digital distribution thing, and when the consumer went into the retailer and wanted to buy an album, the buy was going to be directly from Sony or whoever,” Christman explained. “[The labels and retailers] were fighting over who was going to get the credit card number and who was going to make the sale, plus how the digital pipeline was going to work. It was ridiculous. Everyone was trying to get a bigger piece of the pie while also trying to navigate the legal contracts, and how to introduce a new format.”

In the end, the record companies had no grasp on how to deal with the threat, and the industry continued to contract.

While the industry never fully recovered, reinventing itself instead to accommodate Spotify, Pandora, iTunes and the like, a sliver of good news has emerged in recent years. The vinyl format—initially killed, ironically, by the introduction of the industry-reviving compact disc—began its own resurgence among the younger set.

Record Store Day—an annual promotion launched in 2008 for vinyl releases by independent artists—has been an essential component of that revival. Based on an idea by Bull Moose’s Brown, it began with around 200 stores participating, offering specialty releases produced specifically for the event, around the country, and now has closer to 1,600.

Moreover, there’s been a recent flutter in the number of independent record stores opening. After the number of stores nationwide cratered at around 2,000, recent numbers have that up to around 2,400. But unlike stores of old, many of the new entrants are leaner, meaner and more specialized in its merchandise selection and diverse in the type of offerings, which just might provide some guidance for retailers fielding threats throughout the digital-first purchasing environment.

Another vital factor in the resurgence is that many of these stores have minimal space and have broadened their function with bars or cafés, art galleries, performance spaces and sales of other pop-culture-related merchandise.

If there are any optimistic lessons for nonmusic retailers in the plight of the music industry, they’ll be found here: the success of smaller, more nimble businesses that have taken new approaches to customer relations, distinguishing themselves from the large, impersonal chain stores of old.

Christman noted that Trans World Entertainment, one of the few remaining large music retail chains, has switched the terms and size of many of its retail locations.

“Trans World was building 15,000- to 20,000-square-foot stores and had five- to 10-year leases,” he said. “Now they have stores on short-term leases—for, like, two to three years—and their store sizes are probably less than 5,000 square feet. Retailers need to right-size their stores to the business models of today.”

Retailers also need to avoid the mistake the music industry made in waiting too long to make fundamental changes. The attempts to deal with the problem—like selling MP3s on memory sticks—were minor stopgap measures that allowed the industry to avoid making the larger, significant changes it had to make, which, time revealed, was shifting to smarter digital delivery formats, à la iTunes or Spotify.

“Stores have to start [changes like] this while they still have customers,” Brown said. “As soon as you see a potential threat, you need to jump on it right away. Don’t wait for it to shake itself out.”

Brick-and-mortar retailers also need to create excitement for products beyond just leaving it to be found in a store. Record Store Day is a perfect example of an industry uniting to create renewed excitement around a product.

Stores also need to be open to diversification, finding as many unique ways to turn their stores into destinations as possible.

“You have to have stores that people have a reason to go into, and the reason has to be more variety,” Shepard said. “There has to be something really positive to draw them in. Just to say, ‘I put it on sale,’ doesn’t mean anything because you can go online and get anything you want.”

Roseman believes the most successful retailers moving forward will be the ones who can combine highly functional, satisfying, easy-to-use experiences in both the brick-and-mortar and digital realms. As an example, he cites eyeglass company Warby Parker, which offers the option of ordering through its website, complete with pictures of all its eyeglass frames, or going into a store.

“[The current environment] has forced retailers to really optimize their brand and step up their game,” he said. “Stores built now need to be experiential to some degree.”

However retailers go about it, Brown, whose chain not only endured but thrived in the wake of the record industry meltdown, said that in order to survive you have to have a survival mindset. Many retailers today face an existential threat. They need to forge ahead as such.

“Basically, what you have to do is say, ‘I’m not going to let them beat me.’ That was our attitude in the 90s,” Brown said. “[Our attitude was], I don’t care if [online is] cheaper than us. We’re going to figure this out.”