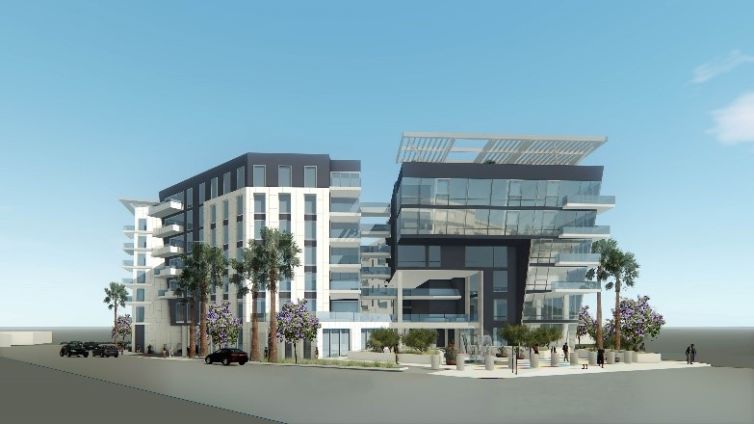 A rendering of The Rise, in Hollywood. Photo: Nadel Architects Guelda Voien

Bank of the Ozarks—the lender behind so much construction across the nation—is at it again.

Private real estate investment trust Rescore Property Corp. has scored a cool $100 million from the bank to proceed with construction of its 386-unit Hollywood apartment building known as the Rise, Commercial Observer can first report.

The development, at 1331 N. Cahuenga Boulevard at Fountain Street, will boast high-end apartments as well as a small amount of retail space and some public amenities, according to documents from L.A. City Planning. Demolition of the existing structures on the site began a few weeks ago, according to Urbanize LA.

The loan was brokered by Kevin O’Grady, Daniel Sheehan, and Eric McGlynn of Walker and Dunlop.

A mix of market-rate, moderate-income and live/ work spaces make up the residential portion of the Rise, which will boast fancy amenities like quartz countertops, a pool, fitness center, yoga room and dog run.

Public improvements, such as trees along Cahuenga and some parking spots for the LAPD, were negotiated in exchange for the zoning variances the development required. The City of L.A. doesn’t mess around—the joint venture also had to promise to install solar panels, parking for electric cars, and provide “Bike-to-Work Day, Walk-to-Work Day, and California Rideshare Week promotional materials” as well as doggie-do do bags in the project’s public plaza.

Rescore is the sole borrower on the note, a representative for Walker & Dunlop confirmed, but local partner Cal-Coast Development is still involved in the project.

The Rise has been planned since January 2015 and construction was initially set to begin in 2016, according to reports.

Neither Rescore nor Bank of the Ozarks immediately responded to a request for comment.