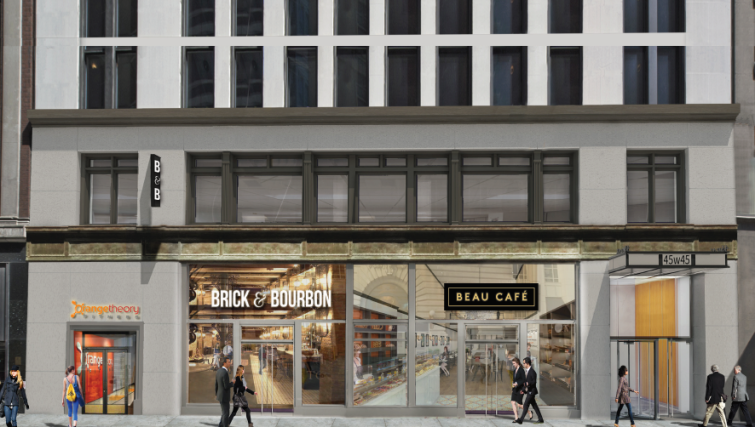 Orangetheory Fitness has inked a deal at Vanbarton Group’s 45 West 45th Street for its fifth location in Manhattan and eighth in the city, Commercial Observer has learned, which is also being joined by a new bar and restaurant concept at the building called Valerie.

The team behind bars The Brazen Fox and Five Mile Stone, has completed a 5,275-square-foot deal for Valerie on the ground floor of building between Avenue of the Americas and Fifth Avenue. It will be a high-end American cocktail bar and restaurant that will occupy the ground floor of the property. Valerie plans to open in the second quarter of 2018, according to the landlord’s broker, RKF.

RKF’s David Abrams and Gary Alterman represented Vanbarton Group in the deal. Michael Cohen also of RKF brokered the deal for Valerie. The brokers declined to provide the terms of the deal via a spokeswoman.

Valerie will service “the office tenants at 45 West 45th [Street] as well as the heavily-trafficked surrounding area and its dense office population,” according to information provided by an RKF spokeswoman.

In the Orangetheory deal, the fitness center is taking a 4,000 square feet on the lower level. The growing gym concept, which provides one-hour group workouts, plans to open the new outpost in March 2018, according to the RKF spokeswoman.

Orangetheory’s digs feature a ground-floor entrance, and it will occupy a portion of the lower level of the 135,000-square-foot property between Fifth Avenue and Avenue of the Americas.

RKF’s Abrams and Alterman brokered the transaction for the landlord, while Ripco Real Estate’s Richard Skulnik and Daniel Mirea represented Orangetheory. RKF and Mirea declined to provide the terms of the deal.

“With 43 million square feet of office space and 7,000 hotel rooms located within the market, 45 West 45th Street is an ideal location for a brand wanting to serve the very dense daytime population of Midtown—an ideal location for Orangetheory to reach its core membership demographic of energetic, successful professionals who lead active lives,” Abrams said in a prepared statement.

The fitness company currently has more than 250 locations in the country. Its other Manhattan locations are at 51 Astor Place between Broadway and Lafayette Street; and 124 West 23rd Street between Seventh Avenue and Avenue of the Americas. Also it is opening new locations soon at 321 West 37th Street between Eighth and Ninth Avenues and 605 Third Avenue between East 39th and East 40th Streets. And it also has three gyms in Brooklyn.

“Orangetheory chose this location due to the office density and closely located mass transportation,” Mirea told CO. “And being that Orangetheory is a national fitness concept we also looked at the hotels in the vicinity so travelers can keep up their method of training when visiting Manhattan. West 45th checks all of the boxes for a Midtown location.”