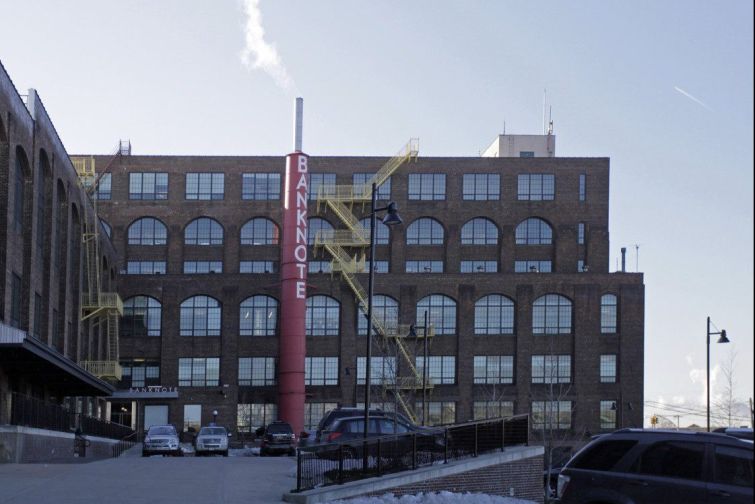 The BankNote Building in the Bronx. Photo: CoStar Group

Job networking firm America Works of New York is taking 14,564 square feet of office space at the BankNote Building, at 890 Garrison Avenue in the Hunts Point section of the Bronx, according to a press release.

The company signed a six-year lease for 10,710 square feet on the fifth floor and 3,854 square feet on the sixth floor of the landmarked six-story, 405,000-square-foot building between Tiffany and Barretto Streets, which is owned by Washington, D.C.-based real estate investment firm Madison Marquette.

America Works plans on using the new space to help serve its latest contract with the New York City Human Resources Administration, which has offices at the BankNote Building and which has retained America Works to provide job assessments and training, according to a press release from JRT Realty Group, which represented Madison Marquette in the transaction.

Asking rent at the BankNote Building was $35 per square foot, according to sources with knowledge of the deal. Greg Smith and Ellen Israel of JRT Realty Group worked on behalf of Madison Marquette, while Joshua Berger and Alexander Lubin of Norman Bobrow & Company represented America Works.

Berger confirmed the America Works transaction and told Commercial Observer the deal was motivated by the Bronx property’s proximity to public transportation, as well as the tenant’s business relationship with the city’s HRA.

In another office leasing agreement at the property, film and photography studio Lightbox-NY renewed its 11,500 square feet on the third floor of the BankNote Building. A Cushman & Wakefield team of Stuart Romanoff, Amy Fox and Franklin Speyer represented Lightbox-NY, with JRT’s Smith and Israel representing the landlord.

In the release, Joe Anthony, Madison Marquette’s director of asset management, said both leases exemplify how the BankNote Building has “attracted various types of creative and institutional businesses alike,” while JRT’s Smith said that outer-borough office markets like the Bronx “are attracting a great deal of attention as ideal areas for affordable office space.”

A C&W spokesman did not immediately return a request for comment.

The 1909 building, which was originally home to the American Bank Note Company’s printing operations and has undergone extensive renovations in recent years, is presently 92 percent occupied.

Update: This story has been updated to include the asking rent at the BankNote Building.