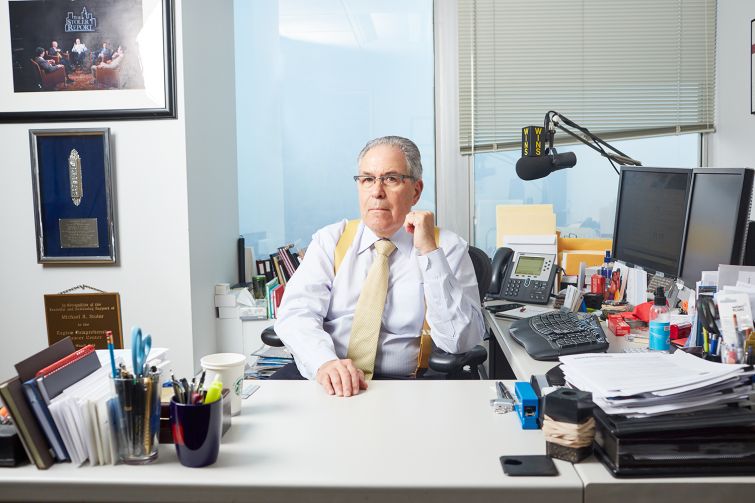 Stoler, who is a managing director at private equity firm Madison Realty Capital, is a popular face on the City University of New York’s CUNY TV as the host and executive producer of the 16-year-old The Stoler Report: New York’s Business Report and the host of the 12-year Building New York: New York Life Stories. (Stoler noted that he just celebrated his 925th Building New York show and has interviewed over 300 people since the program’s inception.)

When Stoler, 70, is not deep into his TV shows or weekly radio segments on 1010 WINS and WCBS Newsradio 880, he can be found working for Madison Realty Capital on bank relationships, advising Mercantile Bank on real estate transactions, teaching a continuing education course at Fordham Real Estate Institute or moderating a panel, like TerraCRG’s 2017 annual Brooklyn conference on May 17.

Commercial Observer chatted with Stoler amidst the schwag five blocks north of the apartment he shares with his wife of 30 years (he has two sons, Keith, 44, and David, 40, from his first marriage) about predatory lending, his stint in the military and the movie Norman. He supplied cans of Coke Zero and two types of pretzels to fortify this reporter who also left with a tote full of tchotchkes.

Commercial Observer: What was your first job?

Stoler: I’ve been a hustler. My first job was working in a supermarket, putting cans on shelves, bagging, but I was really a very good cashier. I was 14.

Did you go to college?

Yeah, I went to the Brooklyn Center of Long Island University in Downtown Brooklyn.

What was your major?

Accounting. I thought I wanted to be an accountant.

Were you in the military?

Army Reserve. It’s a great story. I was in Oklahoma, and I was supposed to be trained as a cannoneer. And then the drill sergeant asked the question, “Anybody a good typist?” I raise my hand, and that saved me for the next six years in the Army Reserve. I was a typist. I had the best assignment. I never went out to the field.

I got into real estate ironically when I was 25 because I was working for a national retail chain. I was the VP of personnel and insurance administration for Hartfield-Zodys. I was responsible for placing the insurance on the real estate. So that was really my first involvement with real estate.

How did you land at Madison Realty Capital?

I had met Josh Zegen [a company co-founder] before. He was a guest on my show and he was a guest on a panel. My contract with Apollo [Real Estate Advisors, later AREA] had ended. They had a need for me, and I had a place to come to.

What do you do at Madison?

I’m an adviser to the company. I’m a managing director, but the majority of my involvement is with banking relationships.

What does your role entail?

If we’re doing a transaction and they want to know some market insight on the property or about the people, sometimes you’ll ask the person who has a little knowledge. So I’m the guy with the gray hair.

What did you do at Apollo?

Do you do that here?

Sometimes. Not as much as I did. And I also do some consulting for companies, some advising and consulting work. Specifically I’m the adviser to Mercantile Bank on their real estate transactions. Mercantile is a commercial bank that does loans all over the country, but when they do a loan in New York, part of my advisory job is to discuss the loan on its merits. So in a way I’m like a credit committee. And I’ve been doing that for them since 2012.

How do you handle that Madison Realty Capital has been accused of being a “predatory lender”?

When you’re in the financing business, that’s part of the risks and the rewards. Banks are called predatory lenders. So, certain banks that charge higher than the standard fees are sometimes considered predatory lenders. They run a complete operation similar to a bank. They do the same due diligence, the credit analysis, the inspections.

There have been quite a few lawsuits against Madison Realty Capital over those issues.

People come to alternative lenders, that’s all. People come here to get more money, speed, expedience. You’ve read the articles and the comments—why people prefer to use an alternative lender. And it’s a fact, you don’t have to go through the same bureaucracy as a bank. You pay a little bit more, but using an alternative lender is cheaper than giving away equity. And that’s why Blackstone is in the business. That’s why Square Mile’s in the business. That’s why so many people are in the business. Madison has really, due to the efforts of Josh [Zegen] and [co-founder] Brian [Shatz], built a big base of business. So when you deal with people on short-term loans that need additional capital you’re going to get caught into circumstances. That’s why everything is documented, and they have really good professionals inside and outside. There’s a risk-reward. It’s not a plain vanilla deal.

Do people confront you with the “predatory lending” issue?

Nobody says anything. Let me preface this, alternative lending has been around probably since the 20s. There was once a group called the finance men club, which would meet at kosher restaurant Lou G. Siegel [then] in the Garment Center. And this was really asset-based lenders who used to lend on inventory and receivables. And basically what has happened is, many of these asset-based lenders, like a person by the name of K.B. Wiseman, originally lent money, and Jeffrey Feil’s father, the Feil Organization, used to lend money on furs, on financing of furs, [and they] became alternative lenders. And it continues today. Madison is one of many, but Madison has really done larger deals because they’ve been able to source leading pension funds, who are very happy with their results.

You’ve really most been a consultant most of your career, right?

Right. It gets more interesting when you read the bottom [of my bio]—the teaching—at New York College of Podiatric Medicine.

What’s your connection with podiatric medicine?

Many, many years ago when I started in business, I created a course for doctors and dentists on business since they had no business acumen. And I used to teach this all around the country in the 70s.

And it was just general business?

Running a practice, how to go into marketing, how to get a loan. It was for fourth-year students and also for residents and interns. And I was on the faculty of a number of medical schools, and then in the 90s I got involved with the College of Podiatric Medicine.

What teaching do you do today?

At Fordham Real Estate Institute, I teach a course on real estate trends. It’s part of the school of continuing professional education.

What’s the biggest accomplishment of the Foundation for Medical Evaluation & Early Detection?

That’s a screening foundation I created in November 2001. Our biggest initiatives in the last couple of years has been in bone marrow screening for people with cancer, genetic diseases, the BRCA gene, if you’re familiar with it, that’s for Jewish people who have a gene that is hereditary for Ashkenazi Jews…We’ve been able to save a number of lives because of genetic testing.

You saw the movie Norman. Do you relate to him?

No. I’m not a hondler. Norman is a hondler. I do things for people to give back. Norman was wheeling and dealing. That was the negative of the movie. But I’ll give you an example of the foundation. A number of years ago I was pushing prostate cancer examinations for men, really pushing it. And then one day I get a phone call from a vice chairman of a bank saying, “I want to have lunch.” I said, “Why?” He says, “You forced me to get screened, and I have prostate cancer. So what should we do as alternatives?”

How do your two TV shows do?

According to CUNY, my shows are the most active shows of the 30 productions that they produce.

Do you consider yourself a reporter?

What makes the best life story?

Let me tell you an acronym that I use. I’ve interviewed over 300 people on my Life Stories show. The key thing on the list—it could be a priest, a rabbi or a physician, it could be a Broadway producer, it could be a performer, it could be a real estate person—is they have SALT. T is for tenacity—there’s drive, perseverance, there’s persistence. The A is the ability to adapt—changing jobs, changing careers, doing a variety of things, adaptability. L—in the words of Larry Zicklin, who’s the benefactor of the Zicklin School of Business—is luck and, in the words of Eugene Grant, the legendary real estate leader [of Eugene M. Grant & Company] at 98, he said, a little mazel [or luck]. And S—seize the opportunity.

Who’s your favorite person you interviewed?

There are too many to name anyone. But I’ve done life stories of Steve Ross [of Related Companies], Larry Silverstein [of Silverstein Properties].

Do you plan to retire?

No. I enjoy what I do. As Larry Silverstein once said, “It’s good to be in the real estate business; you can work until the day you die.”