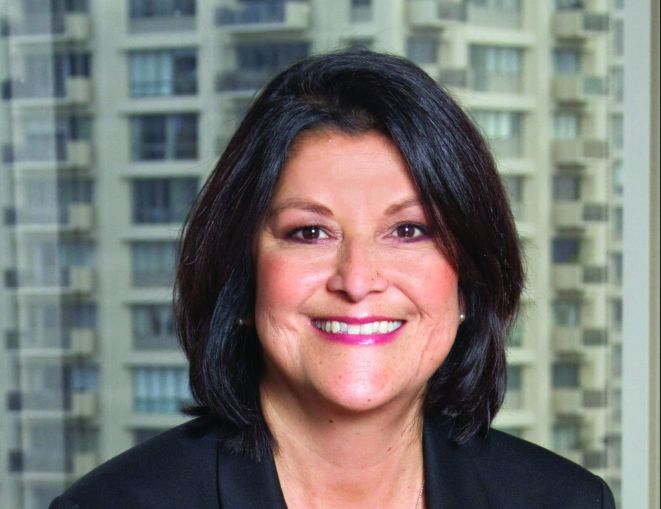 Marcia Diaz weighed in at No. 17 on Commercial Observer’s Power 50 list (along with PGIM President David Durning) for good reason: PGIM Real Estate Finance, the commercial mortgage arm of Prudential Financial, originated close to $14 billion last year and just began offering financing on core-plus assets. As the head of global originations for the life company, Diaz oversees production both nationally and internationally and ensures that PGIM’s multibillion-dollar lending machine is running smoothly. Diaz talked to CO about her 27-year career with Prudential and how her role, and the role of the life company itself, has evolved.

Commercial Observer: How did you get your start in the industry?

Diaz: I grew up in Ventura, Calif., which is a small coastal town one hour north of Los Angeles. I was born and raised there—my mother actually still lives there. I went to Stanford University. Right out of college, I went to work for a retailer that was a precursor to Macy’s department stores. I wanted to be a buyer, but I very quickly learned I was working investment banking hours in retail but on retail pay. So I went back to [school] and got my MBA at University of California, Berkeley, and it was really [there] that I was first exposed to real estate investment. Berkeley has a very strong real estate program, and I took an intro class by Ken Rosen, a well-known real estate economist, and I thought, “Gosh, this is so interesting.”

What appealed to you?

[Rosen] would bring in industry people to lecture us so we got to hear investors, brokers and bankers speak. I loved how real estate had so many components to it and how much of a relationship business it was. When I was in retail, I enjoyed the interaction with people and the sales aspect, but it lacked the analytical side. So I looked at real estate, and I thought, “Here’s a way to have the people side but also use the analytical side of my brain.”

What was your first job in real estate?

I was in the real estate club at Berkeley, and we had “day on the job” work experiences. I selected Prudential Realty Group, which was the largest domestic owner of real estate in the 1980s and 1990s, and set up a day on the job in its San Francisco office. The rest is history—I interviewed with them in 1990 and ended up getting a job with [what then was] Prudential Mortgage Capital Company, the real estate debt investment arm. I’ve been with Prudential ever since.

Can you walk us through the evolution of your role at Prudential?

I started on the debt investment side doing new mortgage loan originations in June 1990, and I was very excited. But by January 1991 the market had shifted and our office became a workout and foreclosure office. Some of the country had already experienced that downturn, but Los Angeles—where I was based—was one of the last markets to be hit. I was disappointed because I thought it was an adversarial environment, but in retrospect it was a great experience. I think every lender and every real estate investor should have to go through workouts before they lend or invest any money. You understand why you’re negotiating certain provisions and why they are important [in a transaction]. From the real estate perspective, you get to see everything that can go wrong, and it makes you a much better real estate investor.

I did that for three years and then took an opportunity on our equity side to work on an asset management team. I oversaw a couple of big, mixed-use office developments in L.A. and San Francisco and learned that side of the business, which included overseeing leasing. Downtown L.A. office rents at the time were basically negative—they were leasing properties just to cover operating expenses. So again, another good learning experience.

In 1994, Prudential was setting itself up to go public, and it ended up liquidating all of the equity real estate from its general account. A decision was made from a stock perspective that it was a drag on the balance sheet. I had the option to stay on and work through selling the portfolio or take an early severance package. I had around five years of experience behind me, so I took the package and went to work for a sister company—Prudential Securities Investment Banking. I worked on a few equity secondary offerings for a couple of real estate investment trusts. Then the initial public offering market closed. So, I didn’t get as much exposure as I wanted, but I worked for the next few years on some M&A transactions and private placements. Again, a very good experience, but it was much more capital markets-focused, and I wanted to get back to the real estate. Part of Prudential’s strategy was to get rid of the investment banking group, and so I got another severance package.

[In 2000] I got a call from Paige Hood [now, PGIM’s chief investment officer] who was running the western region at the time for Prudential Mortgage Capital Company. He said, “Marcia, we need someone to reopen our L.A. office.” At the time they had been running all of the debt out of San Francisco. Since then I’ve been back on the debt side and really worked on growing the L.A. office. In 2007, I took over the western region and expanded my role to oversee more offices nationally.

Then, a few years ago when Dave Twardok retired and Dave Durning ascended to his role as president of the company, I was promoted to oversee production nationally, and last year, international offices were rolled underneath me as well.

What was the most interesting market cycle to work through?

I’d say 1990 to 1994. I was brand new to the market and it was the Savings and Loan Crisis when there was no capital and no commercial mortgage-backed securities market to speak of. REITs were becoming [what they were] because it was a way to raise equity. It was a unique time in that there was no capital for real estate, and markets were fundamentally out of whack.

In the 2008 to 2010 cycle, the real estate markets were still pretty strong, and it was much more of a capital markets downturn. It was almost scarier to see Lehman Brothers going bankrupt. We continued to lend and actually made some of the best loans during that cycle. We had a workout group, but we came out very well—we didn’t take a lot of losses, and the market rebounded faster.

What are your day-to-day responsibilities at PGIM?

My primary role is overseeing originations. I’m not in deals any more, although I do play a credit role on the West Coast where I price certain transactions. I love the real estate, so if it means having to go meet with borrowers or tour the properties, I happily do that.

A lot of my time is spent on talent management and making sure that there are the right people in the right offices and regions so we can keep this machine rolling and keep generating out this $14 billion to $15 billion every year.

[Another big part of my job is overseeing] our analyst program. Our platform is leveraged with analysts who do a lot of the financial analysis so that the loan officers can really focus on relationship building.

Then, as we’ve been starting to expand our asset management capabilities and focusing on raising third-party money, I’ve been pulled in to assist in marketing and pitching PGIM Real Estate Finance’s origination platform. We have a really strong platform, so for me it’s enjoyable to talk about it.

When you’re pulled in to assess a deal, what are you looking for?

There are certain general parameters that we’re looking for, especially in the core mortgage space. We like to be in primary markets, so we ask whether this is a product type we want to invest in. We like office, industrial, retail and multifamily assets—we will do some hotels or self storage occasionally—but beyond that, we ask, “Is this borrower an expert in what they do, and do they really know this market?” While we aren’t recourse lenders, we take the borrower and their abilities very seriously, because they’re the ones that are overseeing the asset. One of the key things that I can do is understand how things can go wrong—so we make sure we run our downturn analyses.

How has the role of the life company changed in the market?

All life companies are starting to expand their appetite outside of core mortgages. It seems like different companies have launched core-plus products, maybe even some mezzanine products and also construction loans because the banks aren’t doing them. You’re starting to see the life companies find different pockets of money, and a lot of it is third-party money—it’s not necessarily coming from their general account. We have this origination platform, and we see a need in the market, and so we say, “Hey, we can originate these loans.”

Is PGIM still active on the construction lending side?

We had started a construction permanent program about three years ago, specifically for multifamily. We saw it as a way to compete for stabilized [multifamily] product because, at the time, the government agencies were hands-down winning all of the stabilized product against life companies. The agencies couldn’t do unstabilized product, so we thought we could get into a deal early and win it that way. By the middle of last year, we had taken on a lot of construction loans, and those projects were in their process of getting completed and leased-up. In terms of where we were in the market cycle, a lot more supply was coming online in the markets we were in and rents were peaking, so we made a decision to ease back on construction lending. Also, we were winning a lot of stabilized business without it because the agencies had raised their pricing to an amount where the life companies were starting to be much more competitive again.

What trends are you seeing so far this year?

In the life company world, people are needing to compete. Generally speaking, underwriting standards have not been compromised, but we’re starting to see interest-only and more prepayment flexibility in lower-leveraged deals. That’s the big trend. I would say that historically PGIM has had the ability to compete on prepayment flexibility, and that seems to be an area that more people are being more flexible in.

You’re a busy woman! What do you do for fun?

When I was younger, I would have said I like to go travel, but now I don’t want to get on a plane! I’m a college football fan, so in the fall I always go to a couple of my alma mater games in the Bay area. I live by the beach, and I enjoy a staycation because I travel so much—I really enjoy just hanging out and relaxing in Southern California. I’m an avid reader, so thankfully I can do that on the plane or on the beach. The next personal trip I really want to take is an African safari.