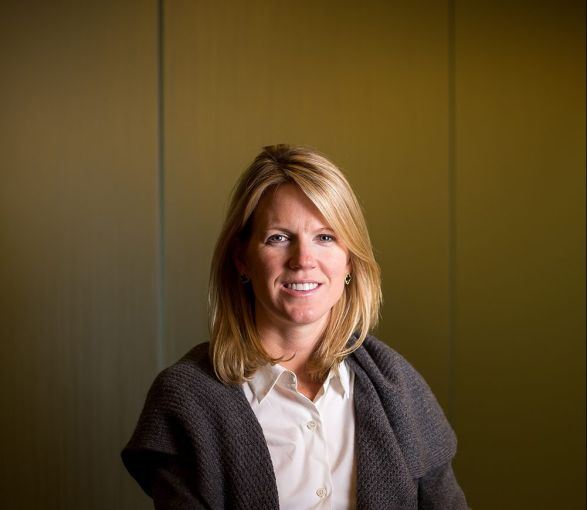 CoreNet Global is a nonprofit that specializes in the non-real estate real estate professional.

This is an organization for the real estate departments of, say, Viacom or McGraw Hill—big companies with significant office needs whose mission statements have nothing to do with real estate but who have a big need for it on a regular basis. The group has always been a place where executives from these companies can gab about new workplace trends and issues.

“Members have said, ‘We are spending all of this money as tenants. Why aren’t the landlords here trying to be part of our group?’ ” Nanna, 34, said. “So we’ve made a special outreach to bringing the landlords this year.”

In May, CoreNet hopes to host its first ever landlord’s circle dinner with some of the biggest property owners in the city—including Related Companies, Brookfield Property Partners, Rockefeller Group, Fisher Brothers and Boston Properties—hoping the two sides could learn from each other. Save for Rockefeller, which is a CoreNet sponsor, the limit of landlords’ involvement with CoreNet so far has been to donate spaces for forums.

“She feels that it is important to make sure that [landlords] are part of our sponsorship base and get invited to key events and make sure that there is a good dialogue going,” said Pay Wu, a senior vice president of corporate real estate at TD Bank and a former chair at CoreNet. “I think that is very powerful for the landlords. I think for the commercial companies things are changing up with coworking, and you have corporations taking less space.”

As young as she is—the Virginia native is the first member under 35 years old to rise to the position of chair—she’s been a member of CoreNet for about a decade, where Nanna has seen the growth of the chapter to 1,050 members from about 600. Established in 2003, CoreNet Global New York City is the largest chapter of CoreNet, which has nearly 50 chapters around the country and the globe, comprising 10,000 members. CoreNet’s executive positions are voluntary and the chair is limited to one one-year term.

Nanna hasn’t wasted any time in pushing the organization in the right direction. Since she took over at the helm of the group in January, CoreNet has been in contact with the mayor’s office to work on lowering members’ carbon footprints—another initiative of Nanna’s.

“The carbon challenge is a citywide effort [through which] they are trying to incentivize tenants to be more carbon-neutral in their portfolios,” Nanna said. “And because we have such a large base of large tenants, we kind of connected with them to be a resource to help them reach out through our relationships.” (The top companies that are CoreNet members each have at least 4-million-square-foot portfolios of office space.)

“It has marketing appeal to be conscientious about sustainability and things like that. It’s corporate responsibility. It results in savings and also good feelings of being conscientious towards our environment.”

Plus, she’s been working to engage with more real estate programs, such as at New York University and Columbia University. CoreNet is sponsoring two scholarships, of $7,500 each, for programs in both institutions for master’s degree students who study real estate.

Nanna herself might be a case in point. “I wanted to be a psychologist, but I knew to be a psychologist you have to get your Ph.D., and that was a lot of education. And I was the youngest of four children, and I saw all of my siblings graduate and get jobs, so I figured, if I got an engineering degree, it was a tangible skill set, that I could get a job easily.”

That idea only lasted so long. “I thought I was good at math and science until I went to engineering school [at the University of Virginia],” she said.

She found work locally at an engineering firm after graduating and then got engaged to her boyfriend. Soon after she broke off the engagement before the wedding. “I had no business getting married at like 24,” she said. So she decided to go from her home state to New York City—jobless —in 2007.

Fortunately, an uncle, who owns a concrete company in Wisconsin, put her in touch with Aine Brazil, a vice chair at Thornton Tomasetti and a well-known figure in the engineering industry. Brazil then introduced her to Forest City Ratner Companies Chief Executive Officer and President MaryAnne Gilmartin. Gilmartin wasn’t able to hire her, though.

“She said, ‘I would love to hire you, but currently we are only hiring Ivy League graduates,’ ” Nanna recalled. (Gilmartin declined to comment.)

But Gilmartin was still willing to help and assisted Nanna in finding a job at project management and consulting firm VVA. Nanna spent seven years there as a project manager and worked on an office buildout project for client, equity firm General Atlantic. She became closer to General Atlantic executives and they decided to hire her to head up global office administration.

She handles various aspects of the company’s real estate, such as paying the bills and overseeing buildouts of new spaces. She also manages 65 executive assistants in the company’s 11 offices around the world.

“We are about to open our 12th office in Shanghai this spring and there are always activities between renewals,” she said. “Of course managing 65 people across time zones is a constant thing.”

It’s an understatement to say that she is juggling a lot. On top of everything she is doing with General Atlantic and CoreNet, Nanna is expecting her first child on June 11.

“I think she is one of the most organized people that I’ve ever met,” said Lou D’avanzo, a vice chairman at Cushman & Wakefield who is a former chair of CoreNet. “Part of her background is project management, and you can just tell. She gets things done, always. She is detail-oriented. She is a great leader.”

Over the years she’s held multiple positions at CoreNet including secretary, vice president, president and chair since January, and she has had the opportunity to forge close relationships in the industry. Networking is the biggest reward and it makes up a lot of the eight to 12 hours a week she spends on CoreNet activities in addition to her day job.

”I just didn’t know people in New York,” she said about first joining CoreNet. “I didn’t know anything about the [region], so I wanted to get involved, and I got involved in some committees and rotated quickly through some committees. Obviously, I was helpful and got things done, and I was asked to be part of the board.”

And it’s thanks to her relationships that she met her husband, one of JLL’s top producing brokers and a vice chairman, Robert Martin. They became acquaintances after meeting at the same annual charity event about four years in a row, she said. Then she introduced him to someone, and he took her out to dinner to say thank you. It took eight months of Martin wining and dining Nanna, but it went from a business relationship to a more romantic one.

”When we get home and talk about our days, we can relate because we know the business,” Nanna said. “We had a lot of relatability, because we are both very driven people and being able to talk about the industry and the struggles that we have with it. We’ve always had common ground.”

Of course, Martin, 21 years her senior, has no limit to his gushy praise for his wife, including describing her as “driven,” “hardworking” and “selfless.”

“She is very generous,” Martin added. “She puts others’ needs in front of her needs.”

The couple has traveled to Spain, Italy, Croatia and Napa Valley, cycling, drinking wine and taking in the local culture.

“We both like to stay in shape and are health conscious,” Martin said. “So we run, bike and swim. We also like to travel and see beautiful scenery and country.”

Her take is slightly different: “It’s like camp for grown-ups. Because you bike a lot, you eat a lot and you enjoy your wine. And then you are with like-minded people, because it’s all people who are choosing to spend their vacation biking.”

The couple that bikes together also sometimes works together. General Atlantic has been a client of Martin’s since 1988. He has helped them relocate and open new offices around the country and worked on the company’s 60,000-square-foot renewal last year at 55 East 52nd Street. As the global office administration head she also played a role in the renewal and helped design a $7 million renovation of the office.

One area that CoreNet’s New York City chapter has yet to move into policy advocacy. Of the city’s real estate and trade organizations, CoreNet isn’t organizing rallies for 421a or arguing for improved workers compensation, as does the Real Estate Board of New York or the Building and Construction Trades Council of Greater New York.

As part of her efforts to expand CoreNet’s horizons, Nanna started an eight-person committee to focus on policy issues. She mentioned the need for transportation infrastructure improvements, such as the revamp at LaGuardia Airport.

“We do have a new initiative with public policy, especially now that [Donald] Trump is in office trying to focus on infrastructure and all of the infrastructure projects going on,” she said. “We are trying to work with the city and become a resource for all of the things that they are getting ready to work on, such as with all that’s going on with LaGuardia and over at Hudson Yards.”