Harlem’s 125th Street Is Going “to Look Like 34th Street” Next Year. Is That a Good Thing? 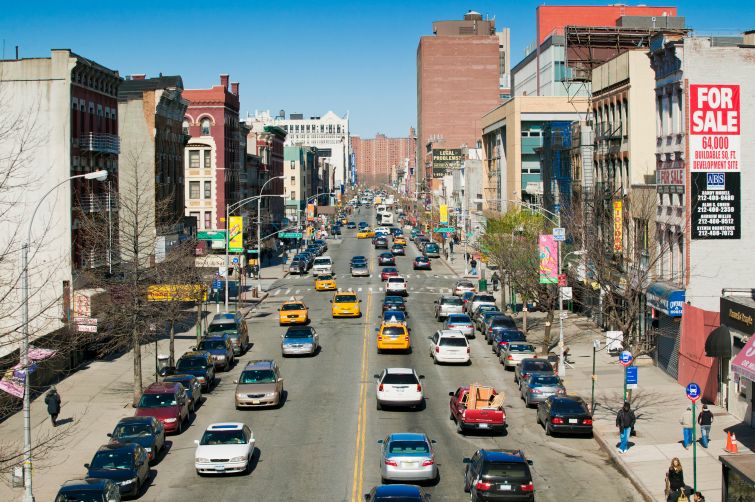 On a sunny April afternoon, 125th Street is a study in contrasts. Starting on the East Side near the Triborough Bridge, aging industrial buildings and a shuttered Pathmark give way to a bustling shopping district. Shoppers heading into H&M and Old Navy rub shoulders with panhandlers and street vendors, and a soon-to-open Whole Foods dominates the corner of Malcolm X Boulevard. The blocks west of Morningside Avenue are sleepier and more residential, until the elevated subway tracks along Broadway, where Columbia University’s gleaming new Manhattanville campus has suddenly sprouted.

While the strip has long been a busy commercial thoroughfare, the current wave of change was sparked by a 2008 rezoning that allows buildings as tall as 30 stories to grow on some blocks, something not everybody is happy with.

“The rezoning was a fraudulent and fraught process,” said Michael Henry Adams, a writer and historian who has lived in Harlem for 30 years and vocally opposed the rezoning at the time. “The lack of height limit and implementation of [low] floor area ratio kept the height limit to six stories. Now the new height limit is 20 stories if you have a cultural facility on the lower floor. There are going to be all these facilities like a black Harlem heritage Disneyland. But where will the black people be? Gone.”

The historic former Victoria Theater at 233 West 125th Street between Frederick Douglass and Adam Clayton Powell Boulevards—which is becoming a 26-story hotel, rental and retail complex with space for local nonprofits—and the new Studio Museum building at 144 West 125th Street between Adam Clayton Powell Jr. and Malcolm X Boulevards will both benefit from the community facility bonus to which Adams is referring.

Few residential developers have taken advantage of the zoning so far. But two sites on the East Side of 125th Street—Durst Organization’s 1800 Park Avenue and Extell Development Company’s 142-196 East 125th Street, a now-shuttered Pathmark grocery store at the corner of Lexington Avenue—will likely sprout some large residential developments. Neither builder revealed its plans, except to say that it was in the planning stages.

Alexander Durst, Durst Organization’s chief development officer, said its project will be a mixed-use rental building. The building at 1800 Park will take advantage of the newly resurrected 421a tax exemption, which means at least a quarter of the apartments will rent for below-market rates.

The Mallization of 125th Street

But residential development isn’t the star attraction along 125th Street. National retailers and hotels are already transforming the face of the historic strip. Over the course of the last decade, Red Lobster, Banana Republic, Marshall’s, TJ Maxx, and AMC Magic Johnson Theaters have all opened up, and there are more major chains on the way.

“It’s a very well-targeted mallization of 125th Street,” said Faith Hope Consolo, who chairs Douglas Elliman’s retail leasing and sales division and has been brokering deals in Harlem for a decade. “125th Street is going to look like 34th Street next year.” Sephora and Macy’s have come close to inking leases on 125th Street in the past year, she added, noting that asking rents of $150 to $200 a square foot seem like a bargain compared to rents for prime retail space in most parts of Manhattan.

Of course, not everyone thinks the narrative should be about national chains moving into the neighborhood. “If it was just about the big boxes coming in, we would fail, because Times Square has that too, and we can’t compete with that,” said Barbara Askins, the president of the 125th Street BID. “We have to focus on the uniqueness, the music, the art, the fashions.”

Plenty of ink has been spilled about 125th Street’s rising rents and fancy new stores and restaurants. But less attention has been paid to the hundreds of thousands of square feet of office and community space under construction at its western end, in an industrial zone that stretches from Amsterdam Avenue to the Hudson River.

At the corner of Broadway, next to the elevated subway train tracks, Columbia University is getting ready to open the first phase of its 17-acre, $6.3 billion Manhattanville campus. Four blocks of factories and warehouses have given way to a massive construction site, part of which was purchased through a controversial eminent domain process. Two boxy glass buildings designed by Renzo Piano have sprouted next to the 125th Street 1 train station.

The 450,000-square-foot Jerome L. Greene Science Center will offer classrooms, neuroscience research facilities, state-of-the-art laboratories and a community wellness center. Three ground-floor retail spaces in the building will help revitalize a sleepy stretch of Broadway. Steep Rock Bouldering is building out a 5,300-square-foot climbing gym in one of the storefronts, and Columbia is looking for a coffee shop and restaurant to take over the two other spaces, according to a press release issued in the fall. Next door, the 60,000-square-foot Lenfest Center for the Arts will hold a theater, screening room, performance spaces and art galleries. Both are set to open in May. Meanwhile, earth movers are excavating the northern half of site to build an academic conference center and a new home for the Columbia Business School.

The finished development will bring much-needed public green space, street lighting, trees and widened sidewalks to the surrounding blocks and improve access to nearby West Harlem Piers Park on the waterfront.

By the time the campus is complete in 2021, the university expects that 2,400 people will work there every day. The infusion of students and construction has nearby developers thinking about how they can benefit.

Scott Metzner of Janus Property Company said schools and biotech tenants have been attracted to his office project a block west on Amsterdam Avenue, largely because Columbia’s new campus is so close.

“We’ve talked to everyone from preschools to CUNY,” he said, explaining that the city college system had considered relocating the Guttmacher Institute to one of his buildings.

Biobus, a company that runs educational labs for elementary through high school students, rents space in Janus’ 1351 Amsterdam Avenue. And biotech incubator Harlem Biospace offers shared coworking lab space in another one of Metzner’s properties, the Sweets Laboratories building at 423 West 127th Street. The company, which rents desks for $995 a month, was founded by a Columbia bioengineering professor, Samuel K. Sia, and his wife, Christine Kovich.

Metzner and his partner Jerry Salama are slowly transforming a collection of century-old factories between 125th Street, 128th Street, Amsterdam and Morningside Avenues into offices and retail. Their multibuilding complex, dubbed the Manhattanville Factory District, includes the former Taystee Bakery building, the Sweets building, the Mink building, 1351 Amsterdam Avenue and the Malt House. Asking rents for office space range from low $40s to low $60s per square foot, but city and state tax benefits can halve those numbers.

The pair has been developing housing and office space in west Harlem for 27 years. They watched the community negotiate a fraught development plan with Columbia, which secured a rezoning for a former industrial site west of Broadway in 2007 to build its massive mixed-use campus.

“The community was resistant to what Columbia wanted to do,” Metzner said. “The community board was recommending a lower density zoning than what was approved.”

In response to Columbia’s proposal, the local community board drew up its own land use plan for west Harlem, which was approved by the City Planning Commission in 2007. Several of the board’s recommendations were ultimately incorporated into the 2012 West Harlem rezoning, which changed the zoning of Janus’ properties from low-density manufacturing to mixed-use industrial and residential.

Columbia also spent years in state court fighting a handful of small industrial property owners, so that the Empire State Development Corporation could use eminent domain to seize those lots on the university’s behalf.

Metzner noted that the university spent years working with the neighborhood and committed to provide $150 million in housing, economic developments and legal assistance as part of a community benefits agreement.

For a building-by-building breakdown of what’s coming from east to west, these are four new retail projects under construction along 125th Street.

100 West 125th Street at the corner of Malcolm X Boulevard – Developer Jeff Sutton’s Wharton Properties made some waves when it leased Whole Foods the ground floor of its new six-story, 200,000-square-foot retail complex. Other tenants include American Eagle and Burlington Coat Factory, both of which opened last year, TD Bank, Olive Garden and Raymour & Flanigan. Whole Foods is supposed to open its doors this summer.

233 West 125th Street between Adam Clayton Powell Jr. and Frederick Douglass Boulevards – A couple doors east of the historic Apollo Theater, the 100-year-old Victoria Theater is being redeveloped into a 26-story building with a 200-key Marriott Renaissance Hotel, 191 rental apartments, cultural space and retail. Half of the units will rent for below-market rates, with 30 percent reserved for folks who make 60 percent of the Area Median Income (AMI), and 20 percent for families who earn 80 percent of the AMI.

The $126 million complex will be split into two connected towers: one for the hotel, the other for the apartments. After sitting abandoned for 20 years, the facade and marquee of the Thomas Lamb-designed movie theater will be restored. The ground floor will likely become a jazz club and restaurant, according to owner Harlem Community Development Corporation, an arm of the Empire State Development Corporation. Roughly 30,000 square feet on the lower floors will be office space for local nonprofits, like Jazzmobile, Classical Theater in Harlem, Harlem Arts Alliance and Apollo Theatre Foundation. The development will also have two black box theaters, which will be convertible spaces that can host fundraisers and receptions. The back of the Victoria theater has already been demolished, and developers Exact Capital and Lam Group expect to hold a ground-breaking ceremony later this month. Work is supposed to wrap by the end of 2018.

324 West 125th Street at the corner of St Nicholas Avenue – Sutton knocked down a neglected, five-story apartment building to construct two stories of retail. The tenants haven’t been revealed yet.