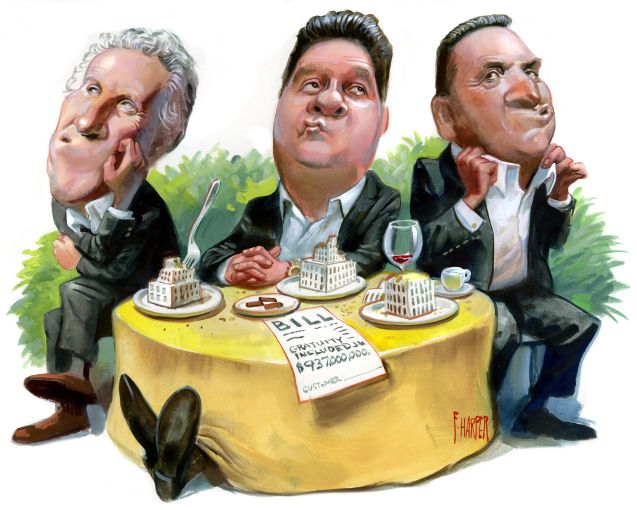 Real estate development is a bit like musical chairs—there are only so many seats to go around, and you want to make sure you have one when the music stops.

New York City’s condominium market is far from silent, but (to perhaps overextend the metaphor) the volume has gone down of late. And that could mean trouble for lenders, investors and builders without the patience or wherewithal to ride out the cycle.

“There’s been no big catalyst that would necessarily cause a dramatic shift in the market,” said Michael Lefkowitz, a real estate attorney with firm Rosenberg & Estis.

That said, “real estate is cyclical, and we are off the highs of where we were,” he noted. “Sales certainly are not as voluminous or robust as they were a year or two years ago.”

According to Olshan Realty’s year-end luxury real estate report (luxury defined, in this case, as apartments selling for $4 million and up), 2016 saw an 18 percent drop in contracts compared with 2015 and a 30 percent increase in average days on the market. Average prices were up slightly, at 2 percent, but listing discounts also rose, hitting 6 percent, compared with 5 percent in 2015.

This softening has led to shifting plans at several proposed and ongoing projects. Last March, for instance, Kevin Maloney’s Property Markets Group announced it would be holding off on sales at its 111 West 57th Street condo tower until sometime this year. Specifically, he said he’d be waiting until at least 800 feet of the 1,427-foot building was complete.

Also last year, developer Steven Witkoff put on hold his plans to convert the Park Lane Hotel at 36 Central Park South to luxury condos (which he and an investor group purchased for $660 million in 2013). The conversion plan was briefly on again over the summer after Witkoff lined up new funding from Chinese developer Greenland Hong Kong but collapsed again when the Justice Department implicated one of the project’s biggest investors, Malaysian financier Jho Low, as part of a massive scam to siphon money from Malaysia’s state investment fund 1MDB. The Wall Street Journal reported last week that a federal judge has now given Witkoff the go-ahead to sell the hotel.

The slowing market has also impacted some developers’ abilities to line up construction financing, forcing them to look to less conventional sources for funds and a few to sell their projects to firms capable of either lining up money to get the job done or holding and waiting for more favorable conditions.

HFZ Capital purchased the development site at 76 11th Avenue in 2015 for $870 million (at a jaw-dropping $1,100 per buildable square foot) and is now working to line up money for construction of what is planned to be a mixed-use condo, hotel and retail development. Late last year, it was reported that the developer was in talks with U.K. hedge fund The Children’s Investment Fund to secure some $1.2 billion in funding. HFZ declined to comment on the status of the negotiations.

In December 2016, Bauhouse Group’s 3 Sutton Place site went to auction with the developer forced to sell after failing to line up construction financing and defaulting on $147 million in loans from Richard Kalikow’s Gamma Real Estate. Gamma bought the site along with additional air rights for $98 million and has since submitted plans for a 67-story, 389-unit condo development.

“If [developers] bought the land for, say, $1,000 a foot two years ago, the land probably isn’t worth that anymore,” said Dustin Stolly, a managing director in JLL’s capital markets platform. “Say it’s worth $750 or $700 a foot now. When the lenders initially made the loan they were giving 65 percent leverage, and now it’s 85 percent or 95 percent. In situations like that, lenders are going to say, ‘Recapitalize, pay me down and right-size my leverage, or I’m going to start foreclosure proceedings.’ And that’s when a lot of tough conversations happen.”

“Clearly there are a number of situations where land was bought at top-of-the-market prices, where that is not looking as attractive as it once was,” said Scott Singer, the president of The Singer & Bassuk Organization. “And I think that how that plays out will be very much determined by the staying power of the developer and how the capital stack is constructed.”

In certain cases, stalled or struggling projects present opportunities for other developers, Lefkowitz noted. He would know, having represented The Durst Organization in its recent acquisition of Property Markets Group and Kamran Hakim’s Queen Plaza Park development site in Long Island City, Queens.

Durst purchased the parcel in December for $167 million and plans to build a 1,000-unit residential rental tower. The developer, Lefkowitz suggested, benefits from the ability to take a longer view of the market.

“They are deep pocketed and very patient and they are not really targeting one particular cycle,” he said. “So that type of money, that type of developer, who doesn’t need to do anything right now but has the ability to sit with a project, they are going to be able to do pretty well.”

Durst similarly bought Bruce Eichner’s East Harlem development site at 1800 Park Avenue last year, purchasing it for $91 million. Durst first acquired around $100 million of the property’s debt and began foreclosure proceedings before the two parties agreed to a sale. Eichner bought the site in 2013 for $66 million.

For developers who have managed to bring their projects to the sales stage, the slowdown could present tension as their interests diverge from those of their investors.

In particular, Lefkowitz said, developers may find their equity partners anxious to exit their investments if sales continue to go slowly.

“I think there are a number of developers who have equity partners who are looking to get out, and are less concerned about executing at top dollar,” he said. “The rub between partners is, equity just wants to be able to make a return of its money and exit, versus the sponsor who is very interested in holding on for top dollar as that’s where they make their money.

“Your private equity buyers have a timeline and horizon and are very focused on the money being invested in a particular project for only a certain amount of time,” he added. “And they are going to be very disciplined in making sure that the project stays on target in terms of not only where it is on price per square foot but also on how long the money stands out there. You are definitely seeing some projects out there that are being traded because the equity is being impatient.”

Singer suggested that even in the case of further softening, traditional lenders will probably emerge largely unscathed, given their cautious approach to the most recent real estate cycle.

“The banks were much more conservative,” he said. “Even as the equity markets have gotten very aggressive, and even as pricing fell to all-time lows, banks tended to maintain their discipline with regard to the sizing of a loan. So while we have seen deals where the sales or leasing are maybe slower or lower than originally projected, it hasn’t really impacted the lenders.”

Losses will mainly be concentrated in “the portions of the capital stack that were getting paid significantly for taking risks,” he added. “And that’s a big difference from what was happening in 2006, 2007.”

“Commercial banks have been hyper-conservative the entire cycle,” Stolly said. “Most have taken a very conservative view on condominium construction loans.”

Jay Neveloff, the chairman of Kramer Levin’s real estate department, said that he expects lenders to ask developers with slow moving projects to put up some additional capital but added that he believed “the market is fundamentally fine. Velocity has slowed for many projects, but pricing isn’t plummeting. Pricing has stabilized.”

There is a distinction to be made between developments hampered by general market conditions and those with project-specific issues, he suggested. “If it’s just a market issue and not a project issue, then I think the lender is going to ask the developer for more capital, and that’s going to be typical of the next, I’d say, 12 to 18 months of the market, I think,” he said. “A lot of private equity funds are talking to developers that need some capital infusion, and they’re discussing terms.”

Those who are able to carry on through the slowdown may well prosper in the end, Singer said.

“The developers who are able to ride out the cycle wind up with their names on buildings that they’ve donated. And the ones who are unable to handle the always eventually cyclical nature of this business are ultimately forgotten.”