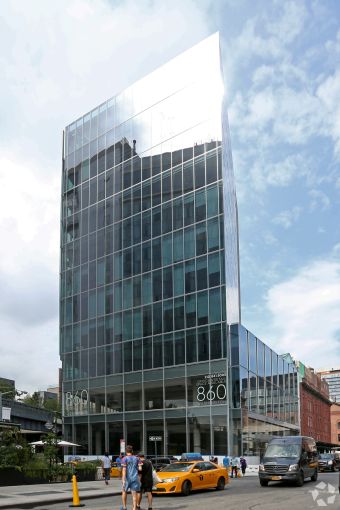 Online lender Social Finance has inked a lease at the glassy boutique commercial building at 860 Washington Street in the Meatpacking District.

The six-year-old firm signed a 10-year deal for the entire second floor of the 10-story, 114,000-square-foot office and retail building at the corner of West 13th Street that hugs the High Line. The lease covers 13,000 square feet of office space with an asking rent of $155 per square foot, according to The Real Deal, which first reported news of the lease.

Property Group Partners and Romanoff Equities developed the building, one of the few new construction office buildings in the former industrial neighborhood. The property is directly across the street from the Standard Hotel and the Morris Adjmi-designed office building at 837 Washington Street, an old warehouse with a cantilevered glass extension perched on top. Representatives for Property Group Partners didn’t immediately respond to requests for comment.

“They leased one of the most exciting spaces in the building, overlooking the High Line park,” said Cushman & Wakefield‘s Stuart Romanoff, who played a role in developing the building as principal of Romanoff Equities and represented the owners in this deal. “They’re going to use it for their New York headquarters. It’s an exciting and powerful branding opportunity,” because the offices face the elevated park and offer 17-foot ceilings, Romanoff added.

The development is nearly 100 percent leased, and the only remaining space is 6,400 square feet on the sixth floor, according to Romanoff. The building is open, and tenants began moving in last month.

A few other high-profile tenants have already taken space in the property. In September 2016, Tesla Motors scored 7,800 square feet on the ground floor of 860 Washington, paying $600 a square foot. Then Chinese e-commerce company Alibaba leased the seventh, eighth and ninth floors of the building last December, Crain’s New York Business reported at the time. Health and wellness real estate company Delos also signed on for 22,000 square feet there in October 2015.

Update: This post has been updated with comment and additional information from Stuart Romanoff, of Romanoff Equities and Cushman Wakefield.