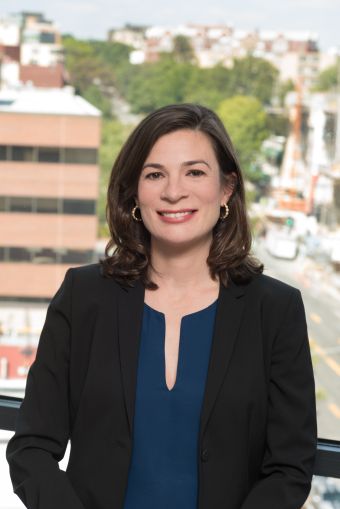 Commercial Observer: How did you get involved in green financing?

Pagitsas: I’ve been in the energy industry for 17 years. I actually started out working as a consultant for a large firm and working for utilities both in the U.S. and in Europe. The focus for us was building financial billing systems for large industrial and commercial customers, so utilities bills in the hundreds of thousands of dollars—not your and my utility bill for $100. I lived in Holland for a year and when I came back to the U.S. I worked [from the U.S.] on renewable energy projects and water management projects in the Philippines and in Jordan, looking at how to use animal waste to fuel methane biodigesters.

When I looked at who was using the energy, it was the real estate sector. Properties use 40 percent of the energy in the U.S., according to the Environmental Protection Agency, so that was a lightbulb moment for me. About the same time LED and green energy and sustainability were really being focused on by the real estate sector. I was hired by Fannie Mae, where I’ve been for the past seven years, to bring all of these areas together.

For how long has Fannie Mae offered green financing products?

When I was hired in 2010 we called it “the green initiative” because we didn’t know what it was going to be. We rolled out our first product in 2012 and that was a joint product with the Department of Housing and Urban Development. Our first loan was a $19 million loan on an affordable housing property out in California. In 2012 we reiterated that product and launched the Empire product in 2014 [only for New York City properties] and added green building certifications and green rewards. We did $3.6 billion in financing last year.

What was the biggest challenge you faced?

For Fannie Mae, the challenge was how to make green financing ‘vanilla’ lending and not a stand-alone product. Nobody had done that before. That’s what we focused on—not making green its own path but rather incorporating it into the standard mortgage financing path.

How did you achieve that?

We figured out the key points on the origination and asset management paths that had to be green in order for the outcome to meet an environmental target, while also being understandable to an average originator. We first developed an energy audit that was simple and streamlined and could be ordered at the same time as the standard appraisal and property condition assessment. Second, on the back end, we asked how we could know that a property has hit an environmental target or lowered its energy costs. So, we partnered with the EPA and developed the energy star score for multifamily properties.

The last piece was disclosure, because at the end of the day our ultimate customers are the bond investors. We have our standard disclosures—data points, debt service coverage, addresses. Now we also disclose ‘this is green and how’—whether it’s because the property has a green certification like LED, or it targets a 20 percent reduction in energy or water costs. These three touch points were critical.

You recently issued a REMIC with green tranches. How was that received?

Yes, two weeks ago we issued a $1 billion REMIC of which there were two tranches for $600 million that were only green deals. What we saw were new investors who had never purchased Fannie Mae bonds before coming in because of the green tranches. That’s a measure of success. There are tried and true investors that always buy agency bonds—they get it and it’s safe—but to attract new customers is huge.

The investor may believe it’s a better investment, or they may have a mandate from their shareholders. Some pension funds, for example, have a statement that says 10 percent of assets must be green. So we’re seeing a recognition that green isn’t a hippy, Birkenstock feel-good thing but it’s actually another way to create value.

What are the benefits of going green for owners?

We offer lower interest rates so interest payment reductions; we take out a closing cost—Fannie Mae pays 100 percent of the energy audit; we offer additional loan proceeds so they can access that capital and they get a reduction on expenses. So, higher cash flow when the improvements have been made. Those are very potent capital benefits and really remove the barriers for owners to try going green. If we offered these incentives but had a complex process, word would quickly get around that it was too complicated, risky or involved too much labor.

What’s next for green financing?

There are two pieces that I see us expanding into. The next green product could be to further penetrate the middle market or further encourage owners to make more improvements beyond 20 percent. Second is meeting investor demand: Do they want properties that hit a 40 percent reduction or do they want properties that report an energy star score and a water score? Fannie serves both borrowers and investors and so we’ll see.