At Least One Injured in Chelsea Market Building Blaze 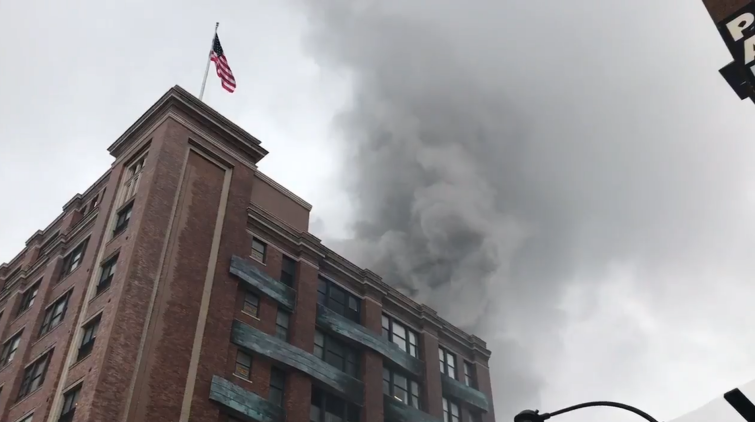 Smoke billows from the roof of the home to Chelsea Market. Photo: NY1 Liam La Guerre

One person suffered a minor injury in a fire that broke out this afternoon on the roof of Jamestown’s Chelsea Market building, a Fire Department of New York spokesman told Commercial Observer. That person was treated on the scene and released, the official said.

The department received a call around 12:09 p.m. about the fire in the building, which has an address of 401 West 15th Street (also known as 75 Ninth Avenue). The fire was “on the cooling tower” at the 1.2-million-square-foot office and retail building, according to a statement from a spokeswoman for Chelsea Market, which is famous for its Chelsea Market food hall on the ground floor.

“The Fire Department responded immediately to the scene, and the adjacent office floors of the building were evacuated as a precaution,” the statement says. “The safety of our visitors and tenants is our greatest concern.”

Twenty trucks carrying 78 firefighters and emergency medical services personnel responded to the scene, a spokesman for the fire department said. The fire was put under control about an hour later at 12:54 p.m., the official confirmed.

The cause of the blaze is still under investigation and the injured person’s identity was not immediately clear. New York Police Department referred a reporter to the Fire Department.

In additional to an eclectic mix of restaurant concepts and craft retailers, the building is home to a lot of well-known companies, including Google, Major League Baseball, Food Network and news station NY1. Jamestown also has offices in the building.