Always a Bridesmaid: The Saga of 2 World Trade Center 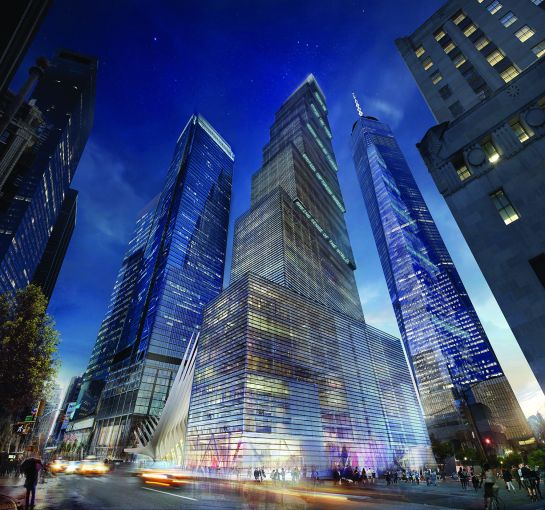 Once upon a time there was a design for a building. Its plans were drawn up by one of the most talented architects working today. And its developer is a man whose reputation stretches to the far reaches of the globe.

The building is 2 World Trade Center, and for some reason, this would-be masterpiece can’t find a respectable tenant to anchor it.

More than a decade ago, it was 2 WTC’s older sister—7 World Trade Center—that New York magazine dubbed the building that everyone wanted to date, but no one wanted to marry.

Now sitting on the drawing board is the Bjarke Ingels-designed 2 WTC, which has taken on the role of the bridesmaid who has watched her little sisters be married off to prosperous tenants like Spotify and Group M. She’s sitting alone, carved out in models on the 11th floor of 7 WTC, her cantilevered staircase design begging to be mounted.

Silverstein executives have remained bullish that they’ll secure an anchor tenant for the 2.8-million-square-foot building. Once they do, it will be the final piece of the World Trade Center—a puzzle that will have taken at least 15 years to rebuild following the devastating attacks on 9/11.

She has had many paramours since her first design was unveiled in 2006. First conceived by Sir Norman Foster, the tower featured a distinct four-diamond design at the top. The idea was to give the memorial at the street level a sense of place: From wherever you looked at 2 WTC in the city, you could tell where the memorial was based on the diagonal top.

That concept attracted a number of suitors—like UBS and Citibank—before the Great Recession and subsequent regulations made them scale back on their real estate. The rakish News Corp. and 21st Century Fox came along in mid-2015 with a plan to occupy 1.5 million square feet of the building. Only she needed a makeover.

So Silverstein Properties brought in Ingels to design the overhaul. But the tower was left at the altar once again: The Rupert Murdoch-run companies backed out of the deal before anything was signed, sending the tower back to the planning stage.

In the time since, Citi had its head turned elsewhere (the bank renewed its 500,000-square-foot lease at 601 Lexington Avenue in 2012 and last year triple-net leased 388-390 Greenwich Street in Tribeca as its global headquarters), and UBS settled (it renewed its 900,000 square feet at 1285 Avenue of the Americas last spring). BlackRock was a more recent contender before committing to 850,000 square feet at Related Companies and Oxford Properties Group’s 55 Hudson Yards—the latest of the massive companies headed to the Far West Side.

There are still a few potential knights in shining armor that could take 2 WTC from dream to reality. One of those could be Facebook, which has raised its Big Apple profile over the last few years. It currently occupies about 355,000 square feet at 770 Broadway and another 200,000 square feet at 225 Park Avenue South. The city’s top leasing brokers will tell you that a large-scale tenant typically takes this route before a massive consolidation.

With the likes of Condé Nast, Spotify and Group M now calling the World Trade Center home, the social network might be the one to put a ring on 2 WTC.