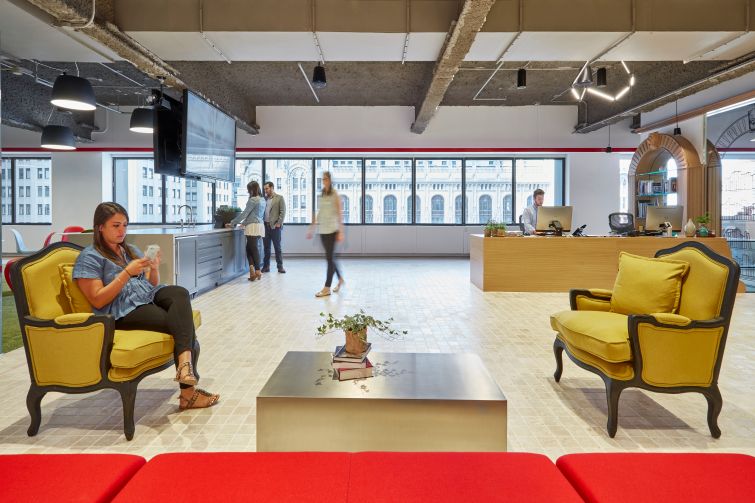 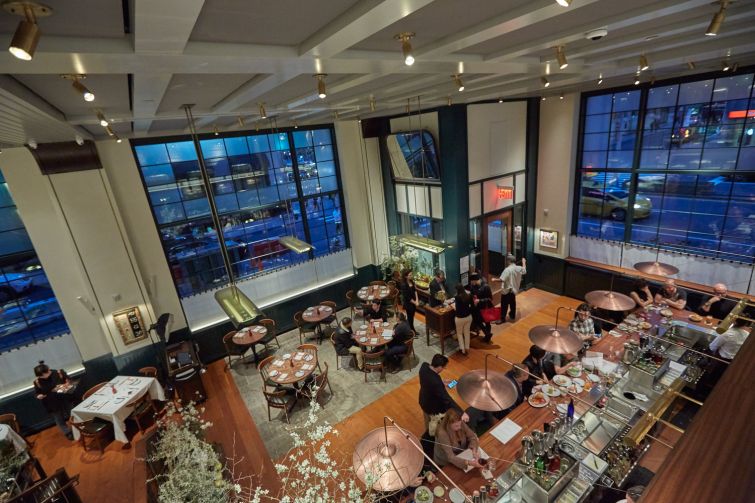 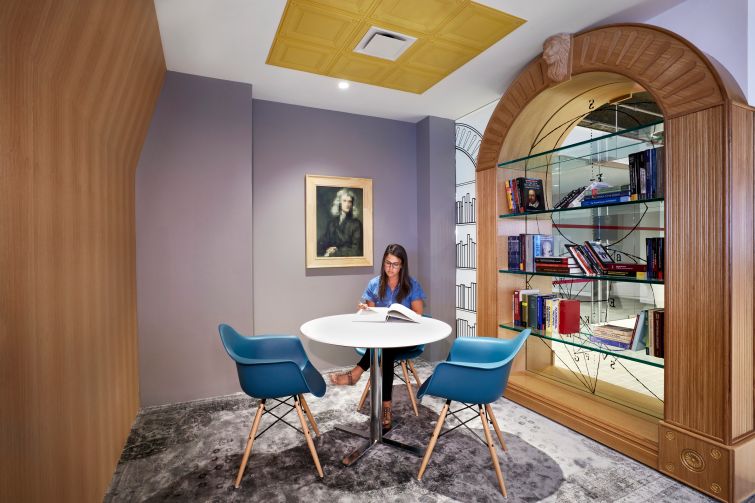 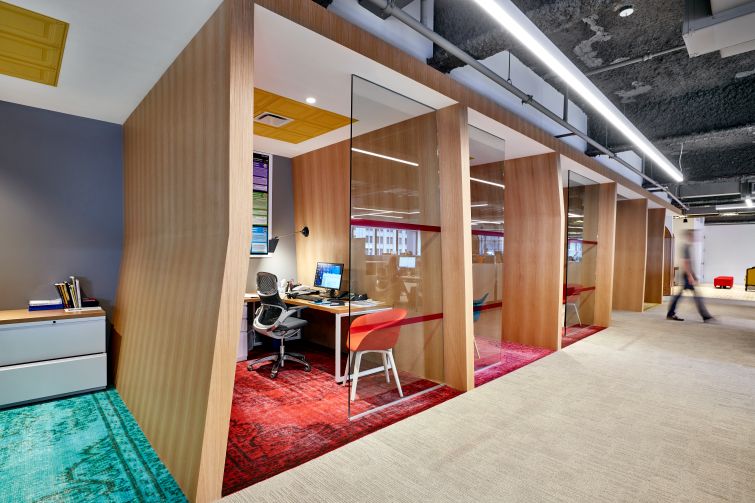 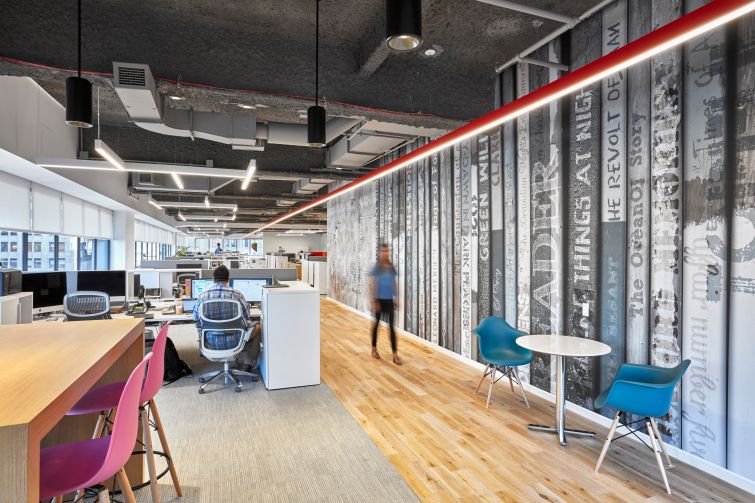 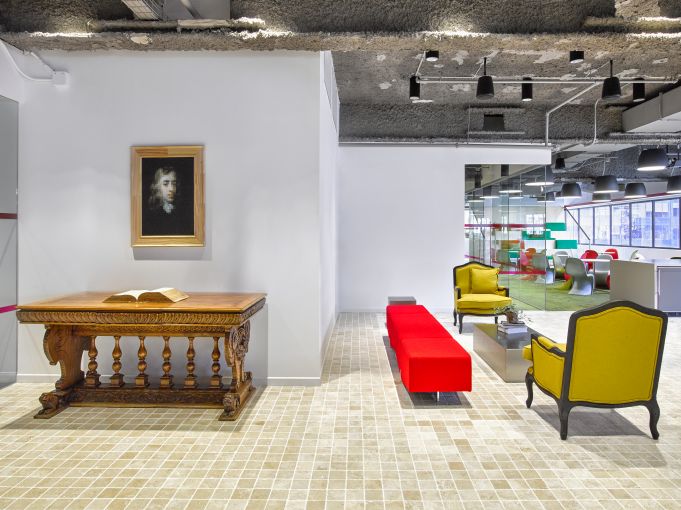 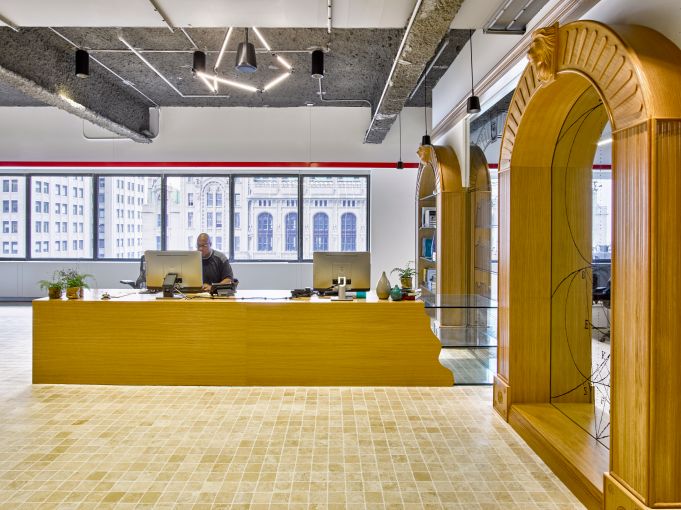 Wooden arches with sculpted lions are a reference to the lions on the University of Cambridge's coat of arms. Photo: Garrett Rowland. Liam La Guerre
Previous Next

At the ripe old age of 483, Cambridge University Press is the world’s oldest publishing company—and its 68-year-old New York branch was completely outdated.

“It was very old school,” Edin Rudic, the creative director of interior architecture firm MKDA, told Commercial Observer of the Press’ 2015 offices at 32 Avenue of the Americas. “The cubicles were tall and it was really stuffy. When we talked to them, they were aware of the problem. They had to get in touch with reality and what people are using these days.”

The publisher—known for titles as varied as Isaac Newtown’s Principia Mathematica to Noam Chomsky’s Language and Mind—signed a 15-year lease in November 2015 to move to 38,000 square feet on part of the 20th floor of One Liberty Plaza between Church Street and Broadway. And it hired MKDA to help bring the design of the new workspace into this era.

The new digs feature exposed 14-foot ceilings and an open-floor plan with more than 150 desks. Communal workstations line the perimeter of the offices, so more employees can enjoy the natural light and views. Twenty-one private offices, which have no doors—for greater transparency, of course—are clustered in the center. (MKDA designed the offices so that doors could be installed later if so desired.) Cambridge University Press moved all of its 168 workers into the new space in late-October 2016.

“Our 483-year-old mission to disseminate knowledge and learning worldwide has never changed, but the fulfillment of that mission has evolved,” Michael Peluse, Cambridge University Press managing director and president of the Americas, said in a prepared statement. “More than a simple office relocation, this was an important move in a challenging business climate that represented our internal and external commitment to progress.”

Despite the modernization, King Henry VIII, who founded the publishing house and granted it to the University of Cambridge in 1534, may still recognize some elements of the office if he could walk in there today. Starting at the reception area, there are carved wooden arches that open to the office, each with an artfully crafted lion’s head. As many in the United Kingdom know, golden lions can be found on the school’s historical coat of arms.

Recalling the atmosphere of the university, there is a lounge area in the office highlighted by grass-like carpeting, which leads to a cobblestone-styled opening (made from limestone to mimic real cobblestone, which is too thick for the floor of an interior space). And a white oak floor that circles the office harkens back to the wooden footbridges at the prestigious institution.

“There is always some kind of root that you want to keep and have as a reference [to the past],” Rudic said. “You can not erase the past. Because you need to have a foundation to grow on.”