The Javits Center Is About to Get a Big Facelift. It Isn’t Coming a Moment Too Soon. 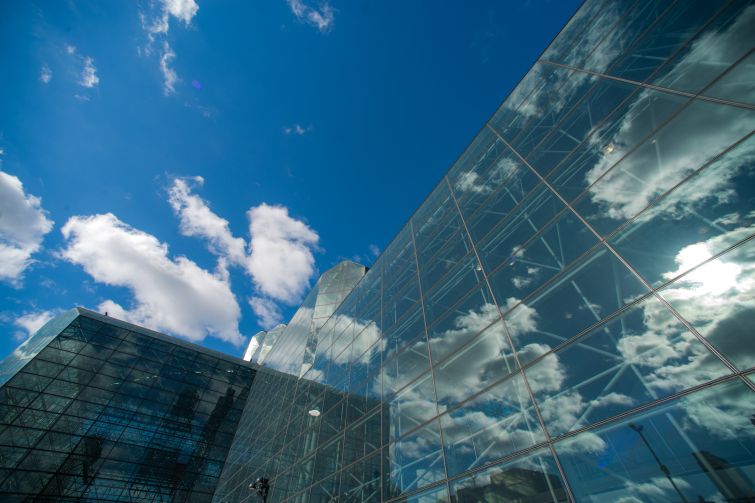 For the last few decades, the Jacob K. Javits Convention Center has stood out as a glass colossus on the Hudson River.

For many years its critics said it was far too small (yes, too small at 2.1 million square feet) and required too far of a walk from mass transportation. (This was in the pre-West 34th Street station days for the 7 train.) Its construction and early operation were plagued by mob operations; there were squabbles to upgrade it in the mid-2000s; officials tried to replace it in the early 2010s.

But after a boom of development on the Far West Side over the last five years, the Javits Center is getting a second life. The Empire State Development Corporation (ESDC), the government entity that controls the 31-year-old facility, will soon select a developer who will design and build a 1.2-million-square-foot expansion of the Javits Center. The $1 billion overhaul will increase the existing facility to 3.3 million square feet, or, by roughly one half.

“The bottom line is we have one of the smallest convention centers for a big city,” said Carlo Scissura, the president and chief executive officer of the construction industry trade group the New York Building Congress. “So this will be a game changer.”

Gov. Andrew Cuomo announced the expansion in January 2016 as part of a $100 billion, statewide infrastructure plan. The ESDC committee overseeing the expansion has narrowed it down to three developers who could take over the project, which was originally intended to break ground late last year. The massive undertaking will either go to Skanska USA, which would partner with architecture firms HOK and STV; Gilbane Building Company; or a joint venture between Lendlease and Turner Construction. All three options—which were shortlisted for the project in June 2016—either declined or did not return a request for comment. Sarah Saint-Amand, the president of the committee that controls Javits, said at a Jan. 13 board meeting that a developer should be selected by the end of the month.

“With the opening of a new subway station and the massive Hudson Yards development outside its doors, the true potential of the Javits Center as an economic engine has yet to be fully realized,” Tony Sclafani, a spokesman for the Javits Center, said in an email. “This expansion will seek to unlock this potential and build upon the building’s recent successes.”

While there are rough renderings of what the state hopes it will look like, the new structure will be added to the north side of the Javits Center at West 38th Street. There will be a 60,000-square-foot ballroom that’s billed as the largest in the northeast. Another big selling point has been an exhibition floor that’s a contiguous 500,000 square feet.

The plan also calls for a new solar energy facility, a four-story truck facility to ease congestion on surrounding streets and a terrace that can hold some 2,500 people, according to the January 2016 announcement.

“The Javits Center has long been an economic generator for this state, but we want to build and expand it to ensure it remains a premier venue for the next generation,” Cuomo said at the time. “Through one of the most aggressive development plans in the history of the State of New York, we are transforming one of our largest convention centers into an unparalleled, world-class venue.”

The history of the Javits Center—named after the liberal Republican Senator Jacob K. Javits from New York—isn’t as bright as the future that politicians hope for it, however. In fact, the nearly 20 years from when construction started in 1979 (it opened in 1986) to the mid-1990s kept newspaper pages filled with riveting copy.

Anthony “Fat Tony” Salerno, a top operative of the Genovese crime family, basically controlled the flow of concrete and saw an opportunity when the state decided to build a replacement for the aging New York Coliseum in Columbus Circle (the city’s main exhibition hall where the Time Warner Center is today).

A 40-count indictment in 1987 against Fat Tony (who had already been sentenced to a 100-year prison term on earlier charges related to his control of the Genovese family), and 15 known associates alleged that the crime king pin orchestrated a bid-rigging scheme for $30 million construction contracts at the Javits Center during the early 1980s, The New York Times reported at the time.

The allegations laid out how the Genovese family was accused of electing union bosses who steered the superstructure work toward subcontractors the crime unit controlled. (Salerno was convicted a year later and got a 70-year sentence; he died in 1992 while serving time.)

The taint didn’t stop once construction was finished—in fact it became a big moneymaker for a mob-owned union. In 1995, a sting operation led by the New York Police Department revealed a pay-to-play scheme by the union representing exhibition workers who staffed events at the hall.

The operation, led by an undercover NYPD detective, uncovered that the exposition union that managed events at the Javits Center was affiliated with the Genovese family and the Westies, an Irish-American gang that ran Hell’s Kitchen. James Mullan, a detective with the NYPD, told the New York Daily News in 1995 how the union would charge someone up to $22,000 for membership, and the person could then make up to $100,000 a year working events at the Javits Center.

According to the Daily News, he said that the building “was where all the big money was being made” and that the mob “was running scams on everything.”

When Gov. Eliot Spitzer took office in 2007, he set out to renovate the then-21-year-old facility, which critics already considered too small to host major events. Spitzer’s planned overhaul turned out to be costlier than expected, and his ESDC chairman, Patrick Foye, ran into problems nearly as soon as the renovation was announced. Things fell apart further when Spitzer resigned amid a prostitution scandal in March 2008—and Foye opted to leave ESDC and return to the private sector. (Foye, now the executive director of the Port Authority of New York & New Jersey, declined to comment for this story.)

Spitzer’s successor, Gov. David Paterson, was able to get a scaled-down version of the project through. State officials in 2009 approved a $463 million investment into the Javits Center that focused more on fixing existing problems such as a leaky roof and less on growth. The addition called for a 100,000-square-foot expansion, of which only 60,000 square feet was used for convention center space, Crain’s New York Business reported at the time.

The five-year renovation also addressed problems with birds who would fly into the glass by making it friendlier to winged creatures. A new green roof has also fostered a home for various types of birds.

By the time Cuomo became governor in 2011, the Javits Center’s days seemed numbered. In his state of the state address in January 2012, Cuomo unveiled plans for a 3.8-million-square-foot convention center near the Aqueduct Racetrack in southern Queens. At that size, it would be the largest of its type in the country and a quick ride away from John F. Kennedy International Airport. The Far West Side building would pale in comparison.

But by that June, talks between Genting, the developer with exclusive rights to build on the Aqueduct site, and the state broke down. Local business leaders in Queens acted quickly to pitch putting a convention center at Willets Point in the northern reaches of the borough. The idea was to have it become part of a broader complex that Related Companies and Sterling Equities had the rights to build around Citi Field.

Today, Flushing-based Fleet Financial Group has been mulling constructing a mixed-use facility that includes a massive convention center in the Corona section of Queens, but because of height restrictions and community concerns, the plans are currently being worked out, said Robert MacKay, the head of tourism and marketing for the Queens Economic Development Corporation.

Perhaps the wildest idea came in November 2014 when The New York Times published an opinion piece by former Deputy Mayor Dan Doctoroff. Similar to the layout of Hudson Yards, the Doctoroff plan called for a massive platform above Sunnyside Yards near Long Island City, Queens.

A massive 3.1-million-square-foot convention center would sit atop it, along with affordable housing and office space. His pitch was to sell the current Javits Center, which he said “was unloved practically from the moment it opened” and use the proceeds to finance a new facility in Queens.

“The cost has always made the idea a nonstarter, but times—and real estate values—have changed,” wrote Doctoroff, who declined to comment via a spokesman for this story. “Stronger market conditions bring us closer to feasibility, but the numbers for building the platform still don’t add up unless we get creative.”

While he didn’t agree with the Doctoroff plan, MacKay said there’s still a case to be made for a Queens convention center despite the Javits Center expansion. One would be particularly well used in the Flushing area, he added, especially given its proximity to LaGuardia Airport and the population boom in the neighborhood.

“I still think that Queens would be able to do a convention center that would be cheaper to operate,” MacKay said. “It would be closer to both of the airports. If I had a big truck and I had to go somewhere, I’d rather go to Flushing or Corona than Midtown Manhattan.”

So why the abrupt change of heart when it comes to keeping the Javits Center? Maybe, it’s because Javits’ home along 11th Avenue—a thoroughfare no longer frequented by hookers and pimps but instead by Related and Oxford Properties Group.

Some players in the real estate and construction world believe the best place to have a convention center is where there already is one. That is because of the many projects in the area by Brookfield Property Partners and Tishman Speyer, and a new 7 train station at West 34th Street and 11th Avenue, across the street from the Javits Center.

Scissura, the Building Congress leader, added that the Javits Center has become a key component to the neighborhood that’s emerged west of 10th Avenue, which by the end of the decade will feature hundreds of apartments, offices, retail and hotels.

“You go to conventions anywhere in the country, you walk out of the convention center there are restaurants and there are hotels,” he said. “Here there was nothing. Now there are hotels. That area will be unrivaled to anywhere, I think, in America.”