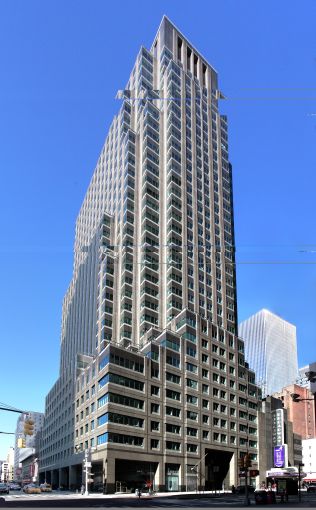 The firm will occupy 27,000 square feet, or the whole 17th floor, and is slated to move in later this year, according to a press release provided by the landlord. The 15-year lease runs through 2032 and had an asking rent of $75 per square foot.

In recent years, the landlord has been filling a swath of the 35-story, 850,000-square-foot building—currently marketing 105,000 square feet across four floors.

Last March, it signed financial firm Bankrate to 24,195 square feet on the whole 22nd floor, as CO reported at the time. The building between West 52nd and West 53rd Streets is anchored by advertising agency Publicis Groupe. The company occupies north of 600,000 square feet, following an expansion by 25,000 square feet in August 2015.

“Now adding Roberts & Holland, one of the great tax law firms in the country, just reaffirms all the things that we’ve done,” Rudin said. “It shows that Midtown West is still a strong market.”

Roberts & Holland will depart Worldwide Plaza at 350 West 50th Street between Eighth and Ninth Avenues. There the firm leaves 30,716 square feet for the whole 37th floor, according to CoStar Group.

“Roberts & Holland LLP is excited to be moving to space in a building owned and managed by the Rudin Family,” said Stuart Gross, a partner at the firm said in prepared remarks. “The Rudin Family has been a client of R&H for more than thirty years and R&H has seen the integrity of the Rudins first hand.”

Rudin added that the building would become more eye-catching with the opening of the Second Avenue subway. That’s because the line—running from East 63rd Street to East 96th Street—is serviced by the Q train, which also has a station about three blocks away from 1675 Broadway.