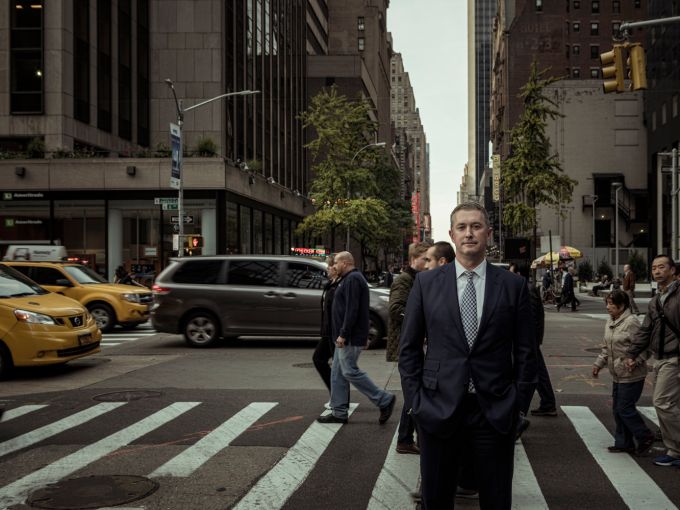 “It’s a tough way to run a railroad doing a lot of small loans,” Schuh said. “The loans may be totally fine, but the absolute revenue associated with them would be relatively small. So we tend to focus on larger, higher-quality [deals] in primary markets.”

The 44-year old—who lives with his wife and four daughters in Connecticut—has been charged with leading Starwood’s large loan lending platform since May 2016, when he left his longtime post at J.P. Morgan Chase to join the REIT. He now oversees the company’s debt platform, which includes a $6.5 billion on-balance sheet book of mortgages “comprised of ground-up construction loans and preferred equity investments to really everywhere in between.”

On average, Starwood’s loan size circles around $100 million with a weighted average loan-to-value in the low 60s, and the lending book that Schuh manages is primarily focused on bridge loans for transitional assets. Starwood’s origination platform puts out roughly $1 billion in debt per quarter, and as of the end of November, Schuh told CO that his team was on track to lend north of $4 billion in 2016.

The work that Schuh does today is in stark contrast to the types of deals he did during his roughly 18-year tenure at J.P. Morgan, where he most recently served as a managing director and the head of commercial mortgage-backed securities origination. The Georgetown University graduate started at the bank in 1997 after spending a year at a small Japanese bank called Sanwa and a year at Fitch Ratings, initially doing fixed-income research on the REIT industry before moving over to J.P. Morgan’s real estate structured finance business side and then eventually overseeing the bank’s capital markets and securitization division.

“My joining Starwood was not about leaving J.P. Morgan, but rather joining Starwood and really continuing in my career,” Schuh said. “I wanted to surround myself with world-class investors, and I wanted to stop being viewed as a banker. We look at our loans as investments. We underwrite our loans and our investments in debt through the lens of an equity investor. That is a very different mindset than working for a big bank.”

As it happens, the last couple of years in the commercial real estate lending business have been characterized by an onslaught of regulations that were a response to the financial crisis, and those regulations have driven up banks’ cost of doing business.

“Some of the dynamics in the market—risk retention, [the High Volatility Commercial Real Estate rule], you name it—are going to benefit the shadow banking industry,” Schuh said. “[Those factors] play to our strengths in terms of our ability to do all different types of deals, and our ability to provide creative solutions and be flexible. We don’t have to fit within a box.”

Basel III, for instance, is a global regulatory framework that has pushed forward HVCRE. HVCRE, which was implemented on Jan. 1, 2015, prevents banks from providing higher-leverage construction mortgages because of greater capital requirements. This is an area where alternative lenders or “shadow banks” have swooped in to fill the lending gap. In the third quarter of 2016, bank lending dropped to 31 percent of total lending volume from 40 percent the prior quarter, while alternative lenders (including REITs, private lenders, pension funds and finance companies) remained steady, accounting for 20 percent of deal volume, according to CBRE research.

“We’ve actually been seeing a fair amount of interesting opportunities in the construction lending space,” Schuh said. “We’ve seen a major pullback across the board of banks, whether that’s because of regulation or whether that’s just from risk tolerance. We’re seeing very interesting risk-adjusted returns for construction lending on the right projects.”

In June, Starwood provided a $330 million construction loan to former Gov. Eliot Spitzer’s Spitzer Enterprises for the ground-up development of a three-tower multifamily development at 420 Kent Avenue in Williamsburg, Brooklyn. The buildings will sit on the 2.8-acre waterfront site and hold a total of 856 units, 20 percent of which will be set aside as affordable through the city’s 421a program.

There is also a steady demand for bridge lending, Schuh said. In October, Starwood originated a $200 million loan for an office tower at 1180 Peachtree Street in Atlanta. “The property had some movement in the rent roll [with] a large tenant likely [downsizing] in its space, which presented a risk profile to some people that was less attractive, but we thought was really interesting,” Schuh said.

In another lease-up deal, his team provided a $120 million mortgage for Cityplace Tower, a 42-story office building in uptown Dallas. The borrower had plans to bring occupancy up to 85 percent from 70.

And Schuh said that even if his team were to turn down a particular deal (which happens very often), Starwood Property Trust is structured as a multicylinder investment platform, allowing the company to deploy capital in a myriad of ways. In addition to large loan lending, the company also has CMBS investing and CMBS loan origination platforms, it directly invests in real estate and owns LNR Partners, a massive CMBS servicing platform and B-piece investor based in Miami. “We’re not a one-trick pony,” Schuh said.

“It says something about business, that somebody like Dennis would spend so much time at a bank and then move over to a platform like Starwood,” said Jonathan Frey, the director of capital markets at the retail-center owner Pyramid Companies.

“As flexible as J.P. Morgan has been and continues to be, going to Starwood is a natural evolution for somebody like Dennis, who wants to do more with his clients and expand his experience base,” Frey said. “He’s in good company. I know a number of other people who have gone into the nonbank sector.”

Frey, who has known Schuh since joining Pyramid in 2010, recalled a slew of deals the two worked on together over the years. He pointed to the refinancing of the Palisades Center Mall in West Nyack, N.Y.

“We did that loan in the fall of 2011 when the markets were going sideways,” Frey said. At the time, many lenders weren’t originating new deals, but with an upcoming maturity date on the mall’s old debt, Pyramid needed to place new debt. And indeed it did, with a $375 million loan from Schuh’s team at J.P. Morgan.

Schuh and his colleagues at J.P. Morgan also helped finance Destiny USA, a super-regional mall in Syracuse, N.Y. In 2012, Pyramid was looking to finance the mall with a traditional loan, as well as secure debt to fund leasing efforts at a newly built 800,000-square-foot expansion of the shopping center.

“That was probably one of the hardest deals I’ve ever worked on in my entire career,” Frey said. “It had every real estate issue that you could imagine. The mall had actually been on the site that previously housed oil tanks and a metal scrap yard. There had been tremendous amounts of environmental remediation, and tenant litigation [at the mall] that occurred over the years.”

Schuh was able to structure a two-part deal where the mall was financed with a securitized floating-rate CMBS loan and Pyramid’s leasing efforts and the new extension were funded through a mortgage that stayed on J.P. Morgan’s balance sheet.

“Dennis says what he means and delivers on it,” Frey said. “He never over-promises. He’s a very solutions-oriented person, and in the lending business, there is a [very big difference] between saying, ‘No, I can’t do this,’ and, ‘No, but here’s an alternative.’ Even if you didn’t like the alternative, he always came back with one versus coming back with nothing.”

Bob Goddard and Russell Read of Atlanta-based Goddard Investment Group shared the sentiment. “In this business, you can’t have somebody that can do everything, but Dennis is very upfront, straightforward and good to work with,” Goddard said. “He has jumped through hoops for us to get things done really quickly.”

Read referred to a transaction where the firm was trying to buy a mortgage note on a foreclosed office building in Atlanta. “Dennis was instrumental in us buying the note. That deal closed in 10 days, when it would normally take 45 to 60 days,” he said.

Similar to Pyramid and Goddard Investment Group, Rajesh Menon, the co-chief investment officer and head of capital markets at private fund manager Greenfield Partners, had done many large loans and large single-asset securitizations with Schuh while he was at J.P. Morgan.

“He gets what he needs to get done, and you get what you see,” Menon said. “Dennis is not one to stand on formality or process. He’s just very focused on getting the job done for his clients. We’re hopeful that the fact that he’s in an environment, like Starwood, that’s a little bit less structured—we hope to be able to do some more customized, shorter-term facilities with him. It’s nice to do some stuff that’s more pure balance sheet.”

In his current role at Starwood, Schuh splits his time between managing his team of 10 originators and working on transactions himself—in part because he is a self-described deal junkie.

“I think everybody becomes that and I think what really what floats everybody’s boat is those relationships, whether it’s with a borrower, a broker or both,” Schuh said. “You become a deal junkie. And those relationships you build are incredibly valuable, and people do business with people that they know, like and trust.”

Starwood wants to continue to grow its loan origination platform, and given the regulatory headwinds banks are facing, the REIT is poised for success. Schuh pointed to the wall of maturities as another area where Starwood can step in and provide debt. If a significant number of the pre-crisis-era CMBS deals are unable to be refinanced, it may fit the transitional profile of loans that Starwood is looking to do. And even with rising interest rates, the company’s lending book is insulated, Schuh said.

“All of our loans are Libor-based, which is correlated to the Fed’s fund rate,” he said. “Our existing $6.5 billion loan book will have more interest income associated with it so we think that’s actually a good thing, and we actually benefit from higher interest rates even though some people think of it as a negative.

“When there is disruption in other markets, it benefits the shadow banking market,” Schuh said. “It’s not the demise of any of those industries or those sectors, but any disruption or any pullback, we think will certainly benefit us.”