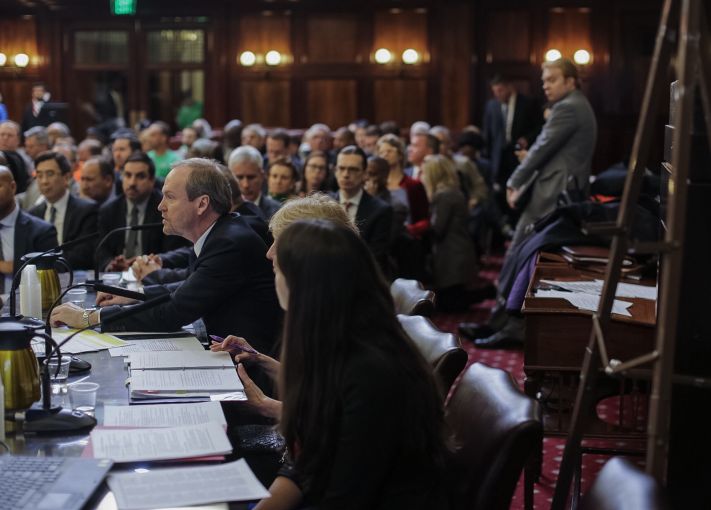 New York City Department of Buildings Commissioner Rick Chandler said he doesn’t believe apprenticeships will be an effective means to address the growing number of construction fatalities in the city—an increasing tension point between union and nonunion labor. Testifying before the City Council’s Committee on Housing and Buildings with other commissioners today, he said the formal training process can take years and force many nonunion workers to lose their current employment.

“Apprenticeship programs take significant time to create and register with the [New York] State Department of Labor,” Chandler said this morning, “and since apprenticeship programs are for new entrants into the construction industry, their impact on mid-career workers is limited, even though experienced workers are just as much at risk as new hires.”

Union and nonunion officials are at odds over the legislation, Intro 1447, which would mandate that all workers go through an official training program (see our story about the growing opposition to the bill here). Opponents to the law have argued it would negatively impact minority workers at nonunion companies, who would be forced to enter into a program that requires on-site and classroom training required by the labor department. On a more political note, nonunion groups have argued the bill would give unions, which already require apprenticeships, control of the construction market by having a structured apprenticeship put into place.

The two sides rallied outside of City Hall in dueling events as council members questioned commissioners, community leaders and construction workers on both sides. It was the second instance in two weeks in which the labor opponents held events to call on lawmakers to address what they’ve characterized as a workplace epidemic.

The apprenticeship law is one of 21 bills of the Construction Safety Act package, which was introduced to the City Council earlier this month. City Council Speaker Melissa Mark-Viverito pushed for the legislation in the wake of 30 construction deaths in New York City over the last two years. Other measures are intended to address construction site safety, enforcement against bad actors and ensuring cranes are properly secured. At today’s hearing, council members called for a closer public advocacy campaign similar to the mayor’s “Vision Zero” policy that curbed pedestrian accidents.

Chandler, during roughly two hours of testimony with three other city officials, suggested that a reasonable training requirement is the 10-hour class certified by the federal Occupational Safety and Health Administration (OSHA), which is only mandated for buildings of 10 stories or more. “I think that would achieve the intended objective,” he said of the certification, also known as OSHA 10.

Mayor Bill de Blasio, a union supporter, earlier this month said he was skeptical of an apprenticeship mandate, citing practicality concerns of implementing the system. After he was scrutinized for the comments, hizzoner tried to clarify the statement on Jan. 20 during an interview with Brian Lehrer on WNYC.

“So, I want to see as much growth of apprenticeship as possible, but I’ve got to deal with the safety issue here and now,” de Blasio said. “And these pieces of legislation are not going to reach all of that. We’ve got to do other things beyond it.”

The day was filled with testimony from bureaucrats and business and community leaders. The questioning began with two union and two nonunion workers discussing how much training they received as a point of comparison.

Gary LaBarbera, the president of the Building and Construction Trades Council of Greater New York, testified in support of the apprenticeship program today, saying it wouldn’t impose union standards, but rather safety standards, over all workers. He asserted that 27 of the 30 deceased workers over the last two years were employed at nonunion sites, and attributed their demise to a lack of training.

“All we are saying…is that every worker should be trained in a manner that is commensurate with what we have,” he said specifically of requiring safety instructions. “You can no longer argue that there is not a distinction in safety training in the apprentice program and the training nonunion workers are receiving, if any.”

His counterpart, Brian Sampson, the head of the Empire State chapter of nonunion trade group Associated Builders and Contractors, said the apprenticeship mandate would put thousands of construction jobs in jeopardy because they would be forced to leave their jobs and go through a formal program. Instead, he suggested safety standards on all buildings regardless of the height a la an OSHA program.

“Like my colleague, Gary, we believe that one death is too many,” Sampson said. “We need to focus on putting legislation in place that addresses 10 stories and below. What we want at the end of the day…is a world-class safety platform in the most difficult construction market in the world.”