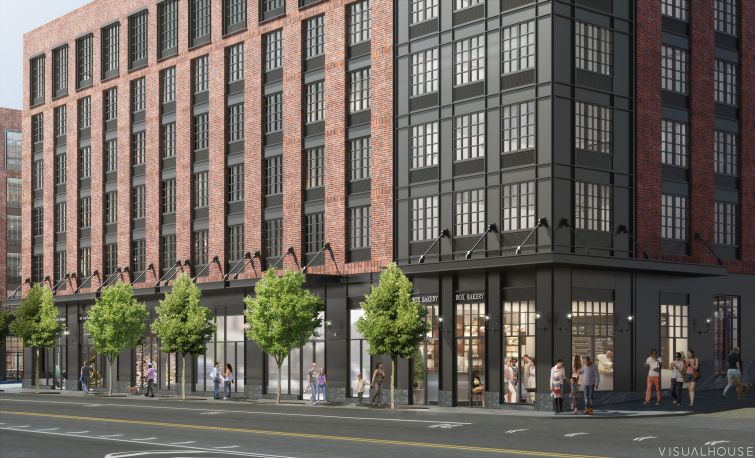 A gourmet ice cream shop born in Brooklyn will get first licks at Greenpoint Landing, the multi-building waterfront development in the northern reaches of the borough.

Van Leeuwen Artisan Ice Cream plans to open its outpost in April, according to a press release from developer Greenpoint Landing Associates, an affiliate of Park Tower Group. Neither the asking rent nor the length of the deal was immediately available.

“We are delighted to be expanding our presence in the neighborhood where it all began,” Ben Van Leeuwen, a co-founder of the eatery said in prepared remarks. “We’re also eager to introduce loyal customers to our expanded menu, which boasts up to thirty flavors of vegan and classic ice cream, floats, sundaes, milkshakes and ice cream cookie sandwiches.”

Van Leeuwen Artisan Ice Cream will serve its homemade ice cream as well as pastries and baked goods, along with coffee from Toby’s Estate and teas from Rishi Organic.

This will be the company’s largest location in the city, the release indicates. Originally started as an ice cream truck, Van Leeuwen Artisan Ice Cream now has three brick-and-mortar locations in Brooklyn, two in Manhattan and two in Los Angeles. Its existing Greenpoint location at 620 Manhattan Avenue between Driggs and Nassau Avenues will continue to operate.

Peter Braus, Peter Levitan, Garry Steinberg and Jaime Schultz of Lee & Associates represented both the tenant and the landlord.

The project, when finished in the next eight to 10 years, will feature 5,500 housing units of which 1,400 are designated as affordable. Construction began on the 365-unit 37 Blue Slip last spring, and work on the neighboring 415-unit 41 Blue Slip should begin in the first quarter of this year.

In October 2015, Brookfield Property Partners came in as a partner to develop the two residential towers with Greenpoint Landing Associates. Brookfield Chief Executive Officer Ric Clark told Commercial Observer in March 2016 rents would be about two-thirds of what Brookfield planned to charge at its rental tower at Manhattan West on the Far West Side.

Greenpoint Landing Associates partnered with L+M Development Partners to develop 7 Bell Sleep along with two other buildings, 5 Blue Slip and 33 Eagle Street, on the 22-acre site at the tip of Greenpoint, bordering the East River and the Newtown Creek. Together the three buildings have 300 units, which are entirely designated below market, according to the release.

By securing Van Leeuwen Artisan Ice Cream, the developer has one more retail space at 7 Bell Slip that’s 1,520 square feet. There are an additional two retail spaces at 5 Blue Slip, which are divided into spaces of 843 square feet and 3,106 square feet.

“We’re ecstatic to welcome Van Leeuwen as our first tenant at Greenpoint Landing—it was very important to us to find a tenant that values the community as much as we do and this will be a huge value-add for the neighborhood,” a representative for the project said in a statement. “We’re looking forward to filling the remaining available four spaces with equally exciting tenants.”