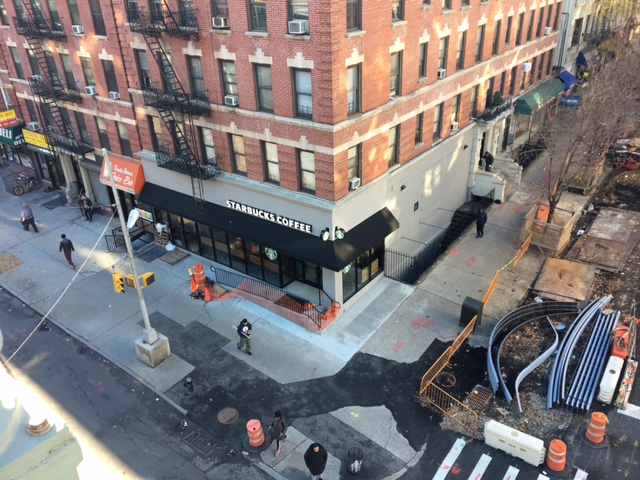 On Monday, Starbucks will be opening at 3165-67 Broadway at Tiemann Place (the equivalent of West 124th Street), Commercial Observer learned at the International Council of Shopping Centers’ New York National Deal Making Conference.

This will be the first Starbucks on Broadway between West 114th and West 168th Streets, according to Starbucks’ broker, David Firestein of SCG Retail.

“Basically it’s an underserved market,” Firestein said. “You’ve got Columbia University’s expansion coming, the subway at 125th Street. There’s a lot of residential there on both sides of Broadway.”

The deal, which was signed in March 2015, is for 1,800 square feet at the base of a residential co-op, according to Margaret Royer of Gavios Realty, who represented the co-op board along with colleague Aaron Gavios, and Howard Aaron of Avison Young, while all three were at Square Foot Realty. The transaction includes 500 square feet in the basement for storage. The lease is for 15 years, she said, and the taking rent started at a little more than $100 per square foot (although it has increased since then).

Starbucks is taking over space previously occupied by a dry cleaners business and a flower shop.

The location “is heavily trafficked by students, faculty and staff associated with Columbia, Barnard [College] and the Manhattan School of Music, all within a few blocks of the location,” Royer said.