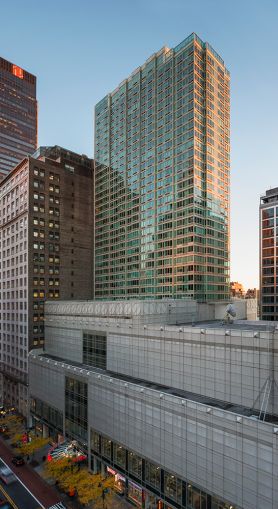 The deal keeps the professional training company at the mixed-use building between Eighth and Ninth Avenues for 15-plus years, the release indicates. Asking rent in the renewal was $70 per square foot.

Landmark Worldwide occupies the entire concourse level of the 492,987-square-foot property, also known as The Olivia. The firm has been based at the building since its completion in 2000, according to the release.

“We are delighted that Landmark will retain its New York City headquarters at The Olivia,” Steven Durels, SL Green’s head of leasing, said in prepared remarks.

David Kaufman of SL Green represented the landlord in-house, while Dan Gronich and Robert Shapiro of Newmark Grubb Knight Frank represented the tenant. Gronich did not immediately return a request for comment via a spokeswoman.

SL Green in August 2013 agreed to buy the 36-story building from Stonehenge Partners for $386 million, as Commercial Observer reported at the time.

Along with a 270,000-square-foot retail and office portion, the building has 333 rental apartments, which are split between studios and one- and two-bedroom units. AMC Lowes Movie Theatre and Music Choice are among the retail tenants at the property.