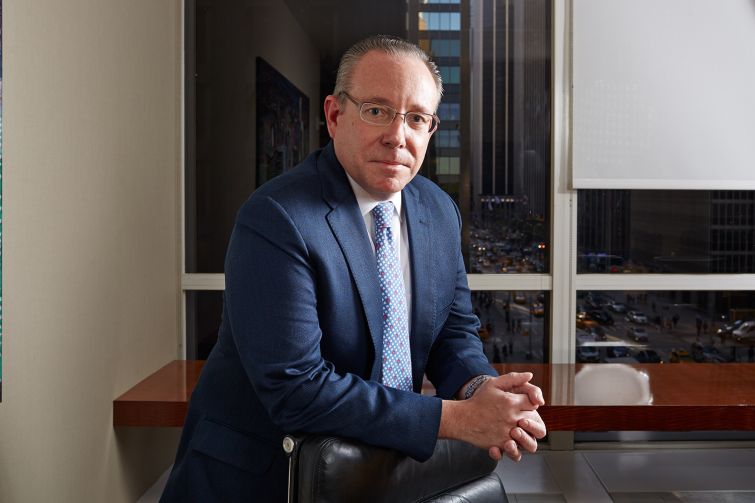 And because SL Green acquired all of Reckson’s Manhattan holdings (six buildings consisting of about 5.5 million square feet of space), it was only natural that Elder would make the move to the city’s largest commercial landlord rather than work at Rechler’s newly established RXR Realty. After stints at Ruben Companies and Cushman & Wakefield, Elder was reunited with Rechler in December 2010.

Elder, a married father of three and resident of Bronxville, N.Y., became the executive vice president and the managing director of the New York City office. Today the company owns roughly 25 million square feet, almost 16 million of it is in New York City. “But if you looked at what the value is of the city assets versus the other holdings it’s a lot more,” Elder, 50, noted. The Manhattan holdings, which primarily fall in Midtown, include 75 Rockefeller Plaza, 1285 Avenue of the Americas, 340 Madison Avenue, the Helmsley Building at 230 Park Avenue, the Starrett-Lehigh Building at 601 West 26th Street, 450 Lexington Avenue, 32 Old Slip and the redevelopment of Pier 57 on the Hudson River.

While RXR’s headquarters is in Uniondale, Long Island, the Manhattan digs serve as “our regional headquarters,” said Elder, who also spent 15 years at Shorenstein Co. He noted that the location of the head office “kind of revolves around where Scott is.” And Rechler is generally in the city three days a week.

Commercial Observer: How did you come to work for Rechler at Reckson?

Elder: I always knew who Scott was. But, I was kind of fascinated by the company and by him, and I remember my first interview with him was at the Peninsula Hotel, and he had, I swear to you, three breakfasts going on—two others and me. And he’s doing this little table-hop thing. So I came in, and two of the guys I met prior were sitting at this table, and I was like, “What’s going on?” They’re like, “You’ll see.” And just the energy and the vibrancy that this guy had. He’s two years younger than me. I was 30-something back then. I was looking at this guy, and I’m thinking, “Oh, my God, this man is really engaged.” I’m forgetting who it was, but these were real business people [he was breakfasting with]. So he was moving around for efficient use of his time. I looked at him, and I’m like, “This is the craziest thing I’ve ever seen.” And he said, “You like it?” I said, “I love it.” He goes, “Well then, jump onboard. Let’s go.”

What do you think you’ve learned from him?

Oh, my god: tenaciousness, focus. I wouldn’t say I wasn’t these things before, but he instills them. And probably more than anything else, forward thinking. He sees things developing—trends or patterns—and can conclude out of that where we need to be. He has always been very forward thinking and several steps ahead of everybody else. The passion that is connected with that and the drive that’s connected with that and the fact that he’s a really good person—it is pretty inspiring to be around somebody like that. He inspires the team. There is no negativity whatsoever. He pushes people to think outside of the box, and he pushes people to make decisions but with real fundamental basis behind them. If it’s a well-informed decision, don’t be afraid.

When SL Green bought Reckson, you didn’t go with Rechler to RXR. Why not?

Frankly, I’m a city-focused person, always have been. [Elder grew up in Norwich, N.Y., and attended Wagner College in Staten Island.] I wanted to remain in the company, but there wasn’t anything left in Manhattan and SL Green made it real easy for me.

Are you most involved on the leasing side?

I definitely am. I mean the lion’s share of my day is generating revenue, making deals, keeping the buildings full, amongst other things.

This year, what is the biggest lease you guys signed?

By far, UBS [at 1285 Avenue of the Americas]. That was a legendary transaction, right? We basically bought the building, signed the leases. We had to do some stuff with Paul Weiss as well—lease modification—did the loan, basically everything closed in the same day. It was a tremendous amount of work by a lot of people, including myself. But pretty rare when you buy these assets. Usually the hard work starts the day you buy. This was one where the hard work started before we owned it, and we got it done.

Is that the biggest deal you’ve ever done?

That’s a loaded question. I will tell you, they all interest me. I am fascinated by different things and different buildings. I mean that sincerely. If I had to pick one that has so many unique attributes to it but not necessarily favorite, I’d say Starrett-Lehigh.

So you’d say it’s the most interesting one?

It’s the size of it, it’s the way the building is set up with the terraces, the creative elements that reside inside just from the real estate, the tenants, the view. You walk around the building, and it’s an old warehouse and there are just these really interesting architectural elements. Not everything is behind concrete, or sheet rock, it’s all exposed. So the windows, we’re replacing all the windows. Same windows, just more thermal protection and they don’t leak. There are just so many interesting attributes to it. It’s not like these other buildings are not fascinating in different ways. But, that one I think, just given the magnitude, the size of the asset.

What percentage occupied is 75 Rock, which you control through a ground lease and are repurposing since it became vacant in 2014?

So we are about 40 percent pre-leased. The building is not done yet. It will be done by the end of the year. So we’re happy with the kind of early leasing, and Bank of America Merrill Lynch took a very large amount of space. They’re in for 120,000 [square feet] right now, and then American Girl [is in] 40,000 [square feet]. Retailers are generally smaller. You know 5,000 or 6,000 or 8,000 feet. So the fact that we got rid of basically all the retail [is great].

How did you convince American Girl to leave 609 Fifth Avenue?

I’d say the Fifth Avenue rent phenomenon probably drove them a little toward us rather than staying there on Fifth [Avenue] or moving to another vacancy on Fifth. The Rockefeller Center retail experience is one of the best in the world. So I think they found real value being in a prominent location there.

What’s going on with Anthony Bourdain’s food-hall lease at Pier 57?

While we have not signed the lease yet, the Bourdain team needed to pause for a moment since this went from a concept to much more of an operating business. As that business evolves, you need additional resources and people. They are in the midst of not only finalizing commitments from new team members, but they are also working with a new group/venue to make this an unbelievable experience.

If you were a betting man, would you bet on this deal actually closing?

You didn’t sound that certain.

Look, I’m superstitious, right? Some brokers don’t calculate their commission. They’re superstitious that once they calculate it, their deal dies. So, I just don’t like to…

Is there a draw to Park Avenue?

I think there is. It’s an easy commute, Grand Central. The commuter base comes in and out of Grand Central—it’s not going away. I think the modern assets that reside on Park and near Park, they’re not going away. The floor plates are generous and light; the buildings are still modern. People have invested money in them to keep the systems up to date.

Do you think Midtown South is going to pull people away?

Look, I think Midtown South may not be for everybody. Downtown may not be for everybody. The Midtown/Downtown thing I think has really leveled off because Downtown prices over the last bunch of years have come up. The premium in pricing is not as vast as it once was to stay in Midtown. I just don’t see the Midtown/Park Avenue draw going away. You look at what we did to 237 Park and reinventing the look and the feel of that asset in identifying all the problems that the building had in prior generations in fixing them and now the way people think about it. We’ve got Convene open—that makes it an even cooler place with a huge amenity. They’re a conferencing center that does a lot more than just conferencing. Really, really cool. They’re at 237 and 32 Old Slip. And maybe some other places, too.

Are you guys planning any buys Downtown?

We’re always looking. We love Downtown. We love New York City. But we just haven’t seen anything recently that’s totally irresistible. But we’ve got some great products down there. Sixty-one Broadway—it’s virtually fully occupied, and the pricing is beyond where we thought we’d be. From a rental perspective we’ve got really great tenants—Bjarke Ingels is there for his headquarters. We’ve got Ramirez & Company. They’re bond underwriters.

We heard there’s a funny story about Bjarke going to 61 Broadway.

Bjarke was a tenant at Starrett, and so I swear to you—and this is the God’s honest truth—I’m standing in the lobby of 61 Broadway with our group of acquisition guys, and Bjarke gets off the elevator with his team and his broker. So I said, “What are you doing here?” He said, “I’m looking at space, but what are you doing here?” So it was in the midst of the whole contract negotiation, when we were waiting for it to close, we actually did the lease with him. He was growing out of space, and you know, Bjarke is the king of modern design, and it reinforced why we should love the building. Because if someone like that, a forward-thinking guy wants to have his office there, that’s pretty meaningful, right?

What are the specifications for a building you would buy?

We don’t find every building necessarily right for us. It’s got to have the right bricks in order to be interesting and the right kind of fabric of what it is, you know, close to transportation, timeless. We love to have a situation where we can see some redevelopment opportunity to make it better, something that has modern technology, the right floor plate.

You have to be able to add value?

Well, it’s add value, but it’s also…I guess I’ll put it this way: Not every building can be iconic, but it can aspire to be. We try to buy these iconic, irreplaceable assets no matter where we go. Two-thirty [Park Avenue] is a great example. I think a lot of people look at that building and [say,] Oh, my God, that thing is [from] 1920! I think clearly there was some vestige of an image problem. We did a marketing sweep that highlights all the great things of the building.

At 32 Old Slip, are you guys planning any renovations?

We are. So you know about the Downtown Alliance with the breezeway activation?

The whole thing on Water Street?

[The idea is] basically to be able to amenitize retail and pop-up retail in completely underutilized breezeways from Water Street, kind of, east. So, we have some as-of-right things we can do on Gouverneur Lane, and then we have that program. So we’re going through designs of that right now.

We have the ability to build a little cube on Gouverneur Lane. Not very big. It is a couple-hundred-foot pop-up that will be a self-contained retail venue.

Would that be food?

I think probably. People have this desire to have really good, unique food, right?