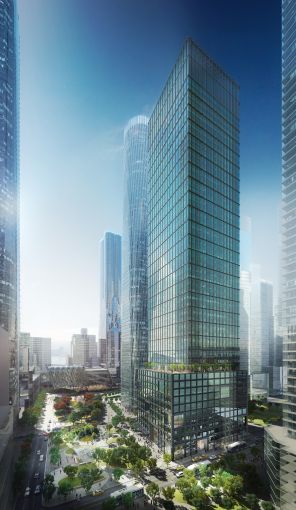 Intercept Pharmaceuticals has inked a 85,000-square-foot lease at 55 Hudson Yards at the corner of West 33rd Street and 11th Avenue.

The firm, known for treating non-viral liver conditions, will occupy the entire 23rd, 24th and 25th floors of the planned 51-story building, according to The Real Deal, which first reported news of the deal. A spokeswoman for Related declined to provide Commercial Observer with the asking rent and the duration of the deal.

Related Companies, Oxford Properties Group and Mitsui Fudosan America are developing the 1.3-million-square-foot building, which is slated to open in 2018. Until then, the company will occupy 49,000 square feet of Related and Oxford’s 10 Hudson Yards, spanning over the 37th floor and part of the 40th floor, according to the Related spokeswoman. Intercept will move to its temporary office in May 2017.

The firm currently has offices in two separate buildings in the Meatpacking District. It occupies 11,124 square feet at 450 West 15th Street and 10,785 square feet 437 West 16th Street, both between Ninth and 10th Avenues, according to CoStar Group. Intercept signed the lease at Hudson Yards to bring all of its employees under one roof, said Newmark Grubb Knight Frank’s Ira Rovitz.

Rovitz represented the tenant with colleagues Paul Ippolito and Seth Weinstein. Stephen Winter of Related represented the landlord in-house with Robert Alexander, Howard Fiddle and Emily Jones of CBRE, who did not immediately return a request for comment via a spokeswoman.