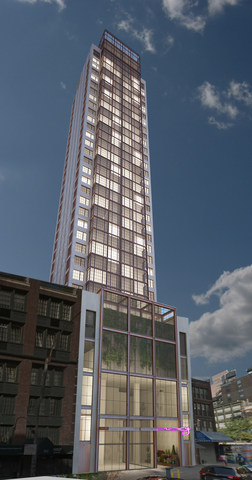 Rendering of the Moxy Hotel at 105 West 28th Street. Cour

Lightstone Group has landed $53 million in construction financing from Bank of the Ozarks for its Moxy Hotel project at 105-109 West 28th Street in NoMad, according to city records made public yesterday.

In addition to the construction loan, Bank of the Ozarks assumed a $17 million mortgage that Banco Inbursa provided to Lightstone on the property in November 2015. It was not immediately clear what the terms of the loan were as a spokeswoman for Bank of the Ozarks declined to comment.

The planned hotel between Avenue of the Americas and Seventh Avenue will include 349 guest rooms spread over 37 stories. It will feature a lounge in the lobby, a fitness center, meeting rooms, rooftop dining and a bar. It is expected to open in 2018, according to a Lightstone spokesman.

“We are very excited partnering once again with Bank of the Ozarks on this Moxy development,” Lightstone President Mitchell Hochberg said in a statement in a Dec. 22 press release. “We’re looking forward to continuing our work with Marriott on several Moxy hotels in New York and across the country.” (Lightstone didn’t immediately respond to a reporter’s questions over email and referred him to last week’s release.)

The hotel in NoMad is one of four Moxys that Lightstone Group is developing in partnership with Marriott International in New York City.

They are currently converting the 1907 building at 485 Seventh Avenue in Times Square into its 618-room flagship Marriott Moxy Hotel, which is scheduled to open in spring 2017, according to an August press release from Lightstone. The Midtown East-based company secured $330 million in financing for the hotel in January, as Commercial Observer reported at the time. And Lightstone is looking to sell the 4,004-square-foot retail condominium at the hotel for $64 million, as CO reported last month.

Lightstone also filed plans with the New York City Department of Buildings in September for a 13-story, 311-room Moxy hotel at 112 East 11th Street Third and Fourth Avenues. This hotel is opening in 2018, according to Marriott’s website.

The fourth New York City Moxy hotel is set for the Lower East Side, however, it’s unclear whether or not a specific site has been selected. Lightstone and Marriott are also building Moxy hotels in the South Beach area of Miami and Los Angeles.

A spokeswoman for Marriott did not immediately return a request for comment.