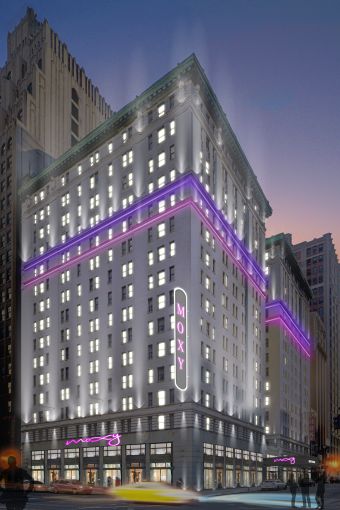 A rendering of the Marriott Moxy Hotel at 485 Seventh Avenue.

Square Mile Capital Management led a $330 million financing package on behalf of Lightstone Group for the development of a Marriott Moxy Hotel in Times Square, according to a press release from the lender.

Square Mile provided a $205 million construction loan to the national real estate investment and development firm, while two unnamed institutional investors provided the remaining $125 million in capital. No further details of the financing were disclosed.

Lightstone is repositioning a 16-story property located at 485 Seventh Avenue between West 36th and 37th Streets, which was originally constructed in 1907 as a 1,885-unit single-room occupancy building. While the building was converted into retail and office in the 1980s, its original design and H-shape floor plate is well suited for a hotel conversion, according to the release.

“This latest debt investment in the hospitality sector positions us well in the early stages of the exciting new micro-hoteling trend,” Square Mile Principal Michael Lavipour said in prepared remarks. “It also establishes a lending relationship with Lightstone, who will be at the forefront of the trend developing two additional hotels of this type under the Moxy brand. Marriott’s first-time involvement at the brand level made this transaction even more compelling.”

The only Moxy hotel that is currently open is in Milan, Italy. Two more locations in the U.S. are slated to open this year in Tempe, Ariz and New Orleans. Eight more are expected to open by the end of the year, including locations in England and Germany, according to Moxy’s website.

“Marriott is the leader in defining the next generation travel and lifestyle space and Moxy hotels are fun concentrated-format lifestyle hotels with smartly designed and technologically advanced rooms, coupled with generous socially activated public space,” Lightstone’s president, Mitchell Hochberg, said. “Our partnership with Marriott puts Lightstone at the forefront of the rapidly growing lifestyle hotel sector in the New York City area. Square Mile’s leading support of this project is a testament to Lightstone as a developer of choice for budget lifestyle hotels in the New York market.”

The deal is the largest construction loan Square Mile has closed to date, Mr. Lavipour noted.

“Our debt investment platform has been extremely active during the past year and we are interested in more opportunities in New York City and elsewhere,” he said.