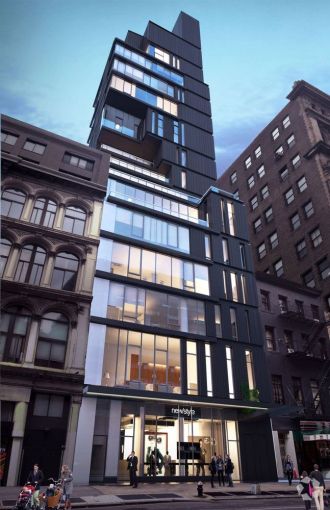 The developer of a Union Square-area residential building has slapped neighbor Ben Shaoul with a breach of agreement lawsuit, alleging the real estate magnate tried to impede work on the project.

In a 13-page petition filed in New York Supreme Court, lawyers for the holding company that’s building 809 Broadway between East 11th and East 12th Streets allege Shaoul, who owns the neighboring four-story 813 Broadway through an LLC, acted as a harbinger to the development, seeking additional fees as well as trying to buy the stalled project. Now the developer is trying to get some of that money back.

The complaint goes on to layout a back-and-forth between the two neighbors that lasted more than a year.

It started in fall 2015 when 809 Broadway Holdings LLC, an investment group led by Ariel Rom, was in the process of seeking approval from the New York City Department of Buildings to build a 15-story residential condominium. The project required Shaoul’s permission to perform the work as well as erect scaffolding above 813 Broadway, according to court documents filed last week.

Shaoul asked the developer for $250,000 in exchange for his blessing, a number the lawsuit calls an “excessive license fee.” The two sides struck a deal in November 2015 for an unspecified sum.

Work carried on until March 11, when an accidental concrete spill at 809 Broadway damaged 813 Broadway, according to the filing. The incident dislocated the residents of 813 Broadway as well as temporarily closed its retail tenant, 7-Eleven, as local blog EV Grieve reported at the time. A stop-work order was placed on 809 Broadway, which was eventually lifted.

The lawsuit goes on to say that DOB instructed the developer of 809 Broadway to demolish a damaged wall, which required a construction crane that would hover over 813 Broadway. As work was ready to commence, Shaoul allegedly stalled the efforts. The two sides struck an accord in May in which Shaoul would be paid an additional $20,000 per month for granting the amended license.

After the wall came down, the construction crews lifted the scaffold so Shaoul could assess damage to the roof—once again halting the project and cooling relations. While negotiating plans to restart the development, Shaoul signalled that he wanted to buy 809 Broadway at what the lawsuit deemed “well below” what had been invested in the $50 million project.

A final meeting between Rom and Shaoul seems to have led to an ultimatum. The lawsuit claims Shaoul told his neighbor that he should sell 809 Broadway to him and that he “did not want to be the one to ‘take him out’ of business.” Shaoul is also accused of betting Rom $1 million that he could hold up development for a year, and “break [813 Broadway’s] roof” to stall the project further.

Rom’s attorneys claim that development at 809 Broadway is in danger of failing, financially and structurally. The concrete incident set Rom back $3.5 million, of which he’s only been reimbursed $350,000 via an insurance claim, according to the lawsuit. In the meantime, wooden sections are allegedly beginning to crumble and metal is starting to rust.

The lawsuit goes on to say that Rom is in danger of defaulting on the property’s construction loan (the debt requires work to continue at the site). Commercial Observer reported in July 2015 that his development group secured a $30 million loan for the site from Natixis Real Estate Capital.

Rom’s attorneys are now seeking a return of the $20,000 in monthly license fees that the LLC has been paying as part of the license amendment since the concrete accident, and a reversion to the initial $250,000 deal.

Y. David Scharf, the lead attorney for the LLC, declined to comment beyond the lawsuit. Neither Shaoul nor his attorney immediately returned a request for comment.