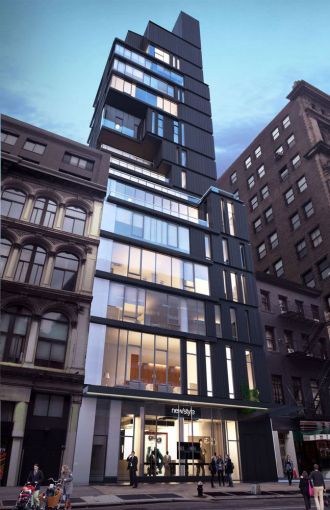 The sponsor, 809 Broadway Holding LLC, is a partnership of three private investors led by its principal Ariel Rom, according to another person familiar with the transaction. New York-based IDM Capital was hired as the project’s development manager in 2013 and is not the property’s owner, as previously reported.

The two-phase project entails the construction of 10 floors above a five-story office building, located between 11th and 12th Streets, followed by the conversion of the existing structure. Blatt Billiards, a pool table manufacturer that had owned and occupied the building since 1972, sold it to the new owners for $24 million in February 2014, city records show.

The $55 million development, once finished, will contain 10 high-end condo units from the second floor up, including one duplex and one triplex penthouse on the top floors, according to the latest plans filed with the New York City Department of Buildings.

The nearly 40,000-square-foot luxury condo property will also contain a 50-foot window line along Broadway on the lower floors, outdoor terraces and about 5,000 square feet of ground-floor and below-grade retail space.

The construction and conversion project is due for completion in the next two to three years. The construction loan, which closed on July 10, follows a $14 million acquisition loan provided by Natixis last year.

The project was delayed by a drawn-out approval process, which took longer than expected, sources said. “This closing represents a successful end to a complicated permit process with the Department of Buildings,” Mr. Herron told CO.

Representatives for IDM Capital and Natixis declined to comment. Mr. Rom could not be reached for comment in time for publication.