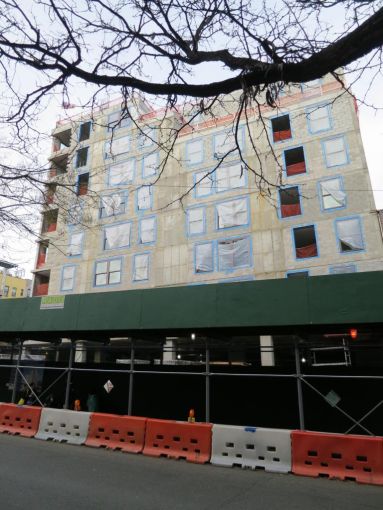 31 Lincoln Road, which was constructed earlier this year, will house the new Gourmet A'Fare.

POM Group, a gourmet supermarket operator, has signed a 12,300-square-foot lease at 31 Lincoln Road in the Prospect Lefferts Gardens section of Brooklyn, Commercial Observer has learned.

The market, which sells meats, cheeses, fish and prepared foods, will occupy part of the ground floor of the eight-story, 133-unit rental building between Flatbush and Ocean Avenues near Prospect Park, according to Kalmon Dolgin Affiliates, which represented the tenant and landlord Lincoln Park Partners in the deal.

POM Group plans to call the new market, its second in the borough, Gourmet A’Fare, said Louie Hamdan of KDA via a spokeswoman. Hamdan worked alongside colleague Alex Itskovitch in the transaction. The asking rent in the 25-year deal was $60 per square foot.

“The subject area seemed to be an ideal location for the tenant’s second store due its proximity to the local parks, the diversity of public transportation and the developing cityscape,” Hamdan said in a prepared statement. “The need for a gourmet market was apparent. Several one-story commercial buildings in the vicinity are prime for [residential] development, which would mean more residents in the vicinity.”