Will Trump Win Have Brexit-Caliber Effects on Financial Markets? 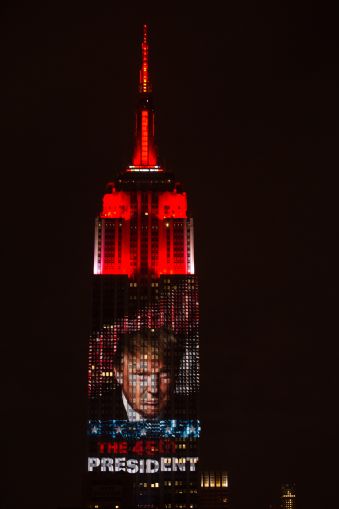 It’s safe to say that Donald Trump’s win came as a “wee bit of a surprise” to many today. As the reality sank in this morning, Commercial Observer sought industry veterans’ immediate reactions to the outcome of the election.

Not everyone had quite gathered their thoughts (or composure) by press time, and so declined to comment. “I’m still in mourning, afraid [of] what I’d say!” said David Kramer, a principal at development firm Hudson Companies. Of those who did comment, some welcomed the new President-elect with open arms, some likened the outcome’s shock level to Brexit and then there were those who said the jolt was far worse.

“Whether President Trump will, in fact, do what he has said he will do throughout his campaign, or whether it was just soaring rhetoric to whip up his support base, for now, Trump winning is sending shockwaves across the world. As such, enormous volatility can be expected in the markets,” said Nigel Green, the founder and chief executive officer of financial markets consultancy deVere. “The Brexit result was a real shock and created instability in the U.K. But this is a far bigger deal as this creates instability on a much wider, international scale.”

A little volatility may not be the worst thing, however. “Whilst some people are put off investing because of volatility, many of the most successful investors welcome it. This is because major buying opportunities are always found where there are fluctuations,” Green said. “Fluctuations can cause panic-selling and mispricing. High-quality equities can then, for example, become cheaper, meaning investors can top up their portfolios and/or take advantage of lower entry points. This all, in turn, means greater potential returns.”

Hold your fire though, opportunistic investors, others said. It’s early days, and chances are that commercial real estate will be just fine. “While it is far too early to tell what President-elect Trump’s policies will be, it is unlikely that there will be an immediate impact on commercial real estate in New York,” Ken McCarthy, the principal economist at Cushman & Wakefield, said in an emailed statement. “Since 2016 began, we have seen global shocks including the Chinese equity market decline early in the year and the Brexit vote in June. Neither of these has had a significant or lasting impact on the economy or commercial real estate.”

McCarthy continued to say that “In the end it will be the performance of the economy that drives the real estate market and the U.S. economy remains in good shape. There could be a slowdown in investment in real estate, particularly in the near term, as investors pause to better understand the landscape. However, there is a large pool of capital focused on real estate and the U.S. and New York remain among the most attractive markets in the world. In addition, the first reaction of investors during times of uncertainty is generally to reduce risk and that should benefit global gateway cities like New York.”

But, some in the Big Apple are taking the news very personally.

“Many of us are hurting today,” said Downtown City Councilwoman Margaret Chin in a new release. “But in the midst of bitter disappointment and diminished hopes, I will always be proud of Secretary [Hillary] Clinton and what she was able to accomplish in this historic election. She may not have broken the final glass ceiling, but she took down barriers that future generations of young women will be able to walk through with greater ease and success. Today we are faced with the reality of a Trump presidency. I know that many of my constituents, in the Lower East Side, in Chinatown, and across my district in Lower Manhattan, are afraid about what comes next.”

Other New York City real estate folks welcomed the news. “We have a stagnant economy. We need him, as a businessman, in the White House. He has the ability to create jobs, and could be the catalyst to make the economy boom again,” said one asset manager source, who preferred not to be named, because “first day speculation is always treacherous territory.”

Although the election outcome is certainly similar to Brexit in terms of the degree of surprise, it differs in one key way (so far)—the immediate rebounding of the financial markets. Whereas the Brexit vote caused stocks to nosedive, and sent the British pound plummeting to a 31-year low, things are a little different on this side of the pond. “I was most surprised [today] by the reversal in the financial markets’ reaction, and the degree of the reversal,” said Heidi Learner, the chief economist at Savills Studley.

Despite an overnight sell-off in the stock market, the Dow Jones index rose by 70 points this morning at opening and continued to rise. Meanwhile Financial Times Stock Exchange was down 2 percent, or 140 points, at opening but rallied during Trump’s acceptance speech and ended the day 6 points up.

While some industry participants were concerned that Trump’s trade policies could devalue the U.S. dollar—the flip side being that U.S. investment could be more attractive with a weaker dollar, similar to the vultures circling London investment post-Brexit—the U.S. Dollar index rose by 0.58 percent.

“Financial markets have recovered after Trump’s acceptance speech due to its notably conciliatory tone and content. It offered reassurance and the markets have responded accordingly,” Green said.

Other market participants were wary of the speech’s impact on the financial markets.

“There’s a tremendous amount of overanalyzing going on today. That’s evidenced in the rally. But really, we have very little indication of how this will play out, what’s on Trump’s agenda and what the near- and long-term impacts will be,” said one trader, who spoke on the condition of anonymity.

The Federal Open Market Committee’s next meeting is set for December and CO previously reported that a rate hike was likely, but this may not be the case any more. “Interest rates are unlikely to move quite as much as has been projected,” said John Kevill, a principal at brokerage Avison Young in Washington, D.C., who pegs the chance of a rate increase in December at only 25 percent now, down significantly from the 85 percent chance he previously anticipated. Additionally, the interest rate will “probably move upward [at] only one out of the next three meetings as opposed to all three,” he said.

At a time when the real estate industry is pinned down by multiple layers of regulations, industry watchdogs will be waiting to see what changes the new president makes.

Trump hasn’t commented on many aspects of financial regulation thus far, but has been outspoken on the Dodd–Frank Wall Street Reform and Consumer Protection Act. During an October 2015 interview with Fox News, cited in The Wall Street Journal, Trump said, “We have to get rid of Dodd-Frank. The banks aren’t loaning money to people that need it. The regulators are running the banks.”

“As far as Dodd-Frank goes, Trump has said he wants to repeal it,” said Matt Anderson, a managing director at Trepp. “This will not happen overnight, but this movement could gain momentum with a Republican House and Senate. All told, the actual contours of what new legislation looks like will be uncertain for a while.”

On the commercial loan side, there haven’t been many potential changes announced that would be impacted by regulations.

“Commercial real estate concentrations as a regulatory issue are not going away,” Anderson said. “[There is] Probably no change here, at least not in the short run.”

“Trump, in my mind, won on a promise of ‘growth,’ ” Kevill said. “His infrastructure spending, lower taxes, moving jobs back and a target of 4 percent growth all speak to that. If it appears that things are starting to happen in that regard, expect commercial real estate investment to follow, and follow fast, as yield will look to be relatively attractive.”