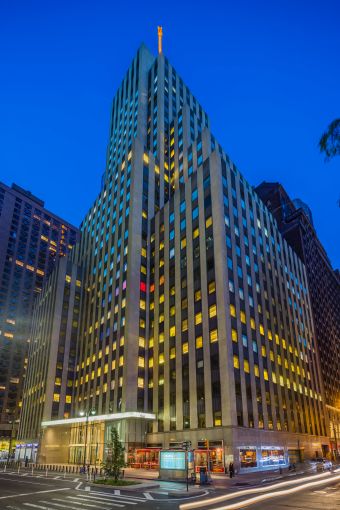 The company, which provides marketing and sampling solutions for global fragrance, beauty and personal care brands, will occupy 10,151 square feet of pre-built space on part of the 14th floor of the building between West 55th and West 56th Streets. Asking rents in the 28-story tower average in the high-$70s per square foot.

“We have focused heavily on our innovative pre-built spaces within the building, implementing forward-thinking design and finishes that have been well-received by brokers and prospective tenants,” Scott Silverstein of Equity Office, a Blackstone Group affiliate, said in prepared remarks. “This was the case with Arcade Beauty, as they had a desire and appreciation for something fresh and creative in the area.”

Arcade Beauty’s new digs comes with a residential-style pantry, concrete floors and exposed ceilings. The company plans to move from its current offices at 1700 Broadway between West 54th and West 53rd Streets in early 2017.

“The high quality finishes, exposed ceilings, polished concrete floors, and open pantries in the new pre-builts at 1740 Broadway have been well-received by a variety of tenants,” Smolyansky said. “The space truly stands out among other products in the market.”

JLL’s T.J. Hochanadel, Robert Martin and Christine Tong, who handled negotiations for Arcade Beauty, did not immediately respond to a request for comment via a spokesman.