PABT Concept Judge: Don’t Rule Out Rebuilding Terminal Where It Is 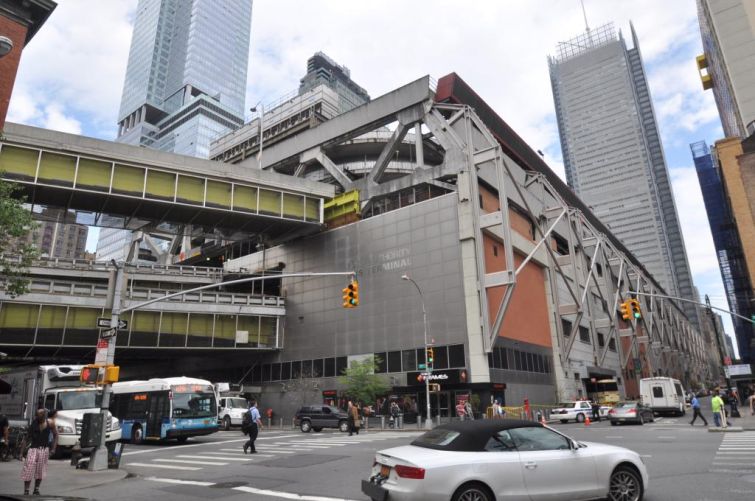 Turns out you may not have to venture very far to find the home of the new Port Authority Bus Terminal.

Martin Wachs, the head juror for the design competition for a new terminal, suggested to leaders of the Port Authority of New York & New Jersey that the bi-state agency consider building a new structure on top of the existing 66-year-old facility.

“We would suggest that there be serious consideration given to a preliminary staff proposal to rebuild the terminal on the current site among the possibilities,” Wachs told the commissioners during a presentation at the Port Authority’s monthly meeting. “Of course it would have to continue to operate while it was being rebuilt.”

The suggestion is the first time building on the same site as the current structure has been floated since the Port Authority launched a competition for new concepts last October. The eight-member jury of urban planning experts unveiled the five finalists for a concept last month, which are estimated to cost anywhere from $3 billion to $15 billion, not including land acquisition or other fringe fees. All of those plans were for a complex west of Ninth Avenue.

Similar methods have been taken in the past, Wachs explained, essentially using a top-down approach. Basically the top floors for a new building would be constructed above the current terminal, which takes up the entire stretch of Eighth and Ninth Avenues between West 40th and West 42nd Streets. The top of the facility would then be demolished and a new one built in its place.

“That’s very complex,” said Wachs, a civil and environmental engineer by training. “Yet, when looking at the complexity of the other choices, it seems at least worthy of consideration.”

The jury also recommended that any structure be built below ground ground, have a green roof for energy efficiency and the option of building multiple terminals as opposed to one.

Asked by commissioner Kenneth Lipper how much a new facility could cost, Wachs declined to speculate because it was too early in the process to decide. Wachs said he couldn’t give an estimate until the agency drilled down a site and design. Reports in the last year have put the price tag between $5 billion and $10 billion.

Port Authority Chairman John Degnan said all of the panel’s suggestions, released today as part of a broader report on the terminal, are on the table. The only certainty, he said, is that a facility will be built on Manhattan’s West Side, following an agreement between commissioners for the two states in March.

“No options are off the table,” Degnan said in a post-meeting press conference, adding Port Authority staff had previously done preliminary research on building on top of the existing building.

The hoopla over where the terminal gets constructed started when New York appointees earlier this year suggested exploring building a replacement facility across the Hudson River in New Jersey, which in turn could have reduced tunnel congestion. Garden State delegates agreed to support building a new terminal at LaGuardia Airport in exchange for a promise the structure would be built in New York City.

Degnan, Port Authority Executive Director Patrick Foye and Vice Chairman Steven M. Cohen met with elected officials representing the Hell’s Kitchen neighborhood that would be impacted by the new terminal. Politicians and community leaders rallied in July against what they alleged was a lack of involvement by the Port Authority in the planning process. Commissioners in September agreed to delay moving further along with the project, and vowed to factor in more community feedback.

The next step is entering into the planning authorization phase, a resolution for which is expected to go before the board in either December or February (Port Authority commissioners do not meet in January).