A Port Authority Meeting Descended Into Pandemonium, but Compromise Was Finally Reached 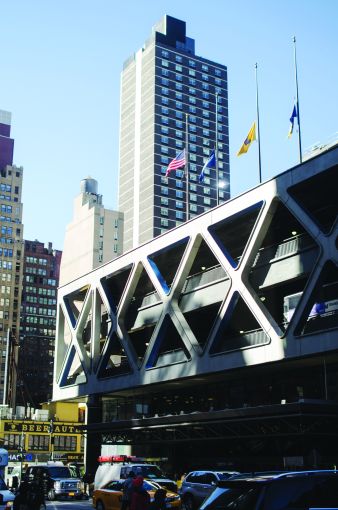 If and when a new Port Authority Bus Terminal is built, the facility will be in Manhattan following a messy board meeting (Photo: Molly Stromoski/for Commercial Observer). tcullen2015

The room was packed. The smell of sweat wafted through the air. Then two attorneys began shouting at one another over how much something would cost.

Yes, this is a scenario that any one of the roughly 250,000 commuters coming through the Port Authority Bus Terminal could see on a daily basis. But it was actually the vote on which side of the river (New York or New Jersey) a new facility would be built.

After much bickering, the Port Authority of New York & New Jersey decided to ensure that a new transit hub would be built on Manhattan’s West Side, ending the proposal of a replacement across the Hudson River in New Jersey.

The move, announced the night before the March 24 meeting, puts a new terminal in the Port Authority’s 2017-2026 capital budget and was celebrated by New Jersey lawmakers. It was part of a long day of votes and infighting that eventually led to moving forward with a down payment on Gateway Tunnel along with overhauls of Newark Liberty International Airport and LaGuardia Airport.

The first move still leaves a lot of road between last week’s vote and when, where and what the cost of the new terminal will be. Port Authority governors voted in October 2015 to launch a design competition for a replacement to the existing terminal, which stretches from West 40th to West 42nd Streets and Eighth to Ninth Avenues. At the time, the estimate was that a new structure would cost upwards of $10 billion—more than what’s been floated to replace all of LaGuardia.

During the public meeting, Mr. Foye, who was appointed by Gov. Andrew Cuomo, noted that the terminal could be built to the tune of $15 billion. Chairman John Degnan, a New Jersey appointee to the board, took issue with Mr. Foye’s estimate, saying that it was a number floated between the two of them in private. He went on to add that Mr. Foye should not add context to the discussion since the executive director doesn’t have a board vote, and voicing his opinion on the project was “out of order.” The two cleared the air in the press conference after the meeting, saying their disagreement was more of a collaborative process between the two states.

But, like many other public works projects, the overarching concern is whether or not the eventual project will be kept within budget. Barry LePatner, a construction lawyer and infrastructure investment advocate, said the Port Authority could lock in a developer to stay on budget by signing off on all designs before a contractor is named. In the past, he added, plans were never fully approved—essentially opening the door for costs to tick up as the project changes.

The debate over the new bus terminal and airport improvements has been a politically charged tennis match in the last few months. New York appointees had floated the concept of a new transit hub in New Jersey, which means New Jersey commuters would be subjected to an automatic bus transfer before reaching New York.

Ultimately a compromise was reached to keep the terminal in Manhattan, after which New Jersey appointees agreed to support the new central terminal at LaGuardia despite the debate over the project’s true cost.

Vice Chairman Scott Rechler, a New York appointee and the chief executive officer of RXR Realty, walked back earlier statements about the New Jersey plan and said he’s always supported building a new terminal in Manhattan. Instead, Mr. Rechler said, his concern has been about congestion in the Lincoln Tunnel, through which buses from New Jersey travel into Midtown.

“While I’m supporting … [the] compromise that we have here today, including the bus terminal at this point in the capital plan—which I always would have included in the capital plan—I would preferred to have done it in a more systematic way in a process that’s been more consistent with how this new Port Authority board has functioned in the past,” Mr. Rechler said during the meeting. “And I also would have preferred to have studied more deeply alternatives to shed some of the capacity in New Jersey.”