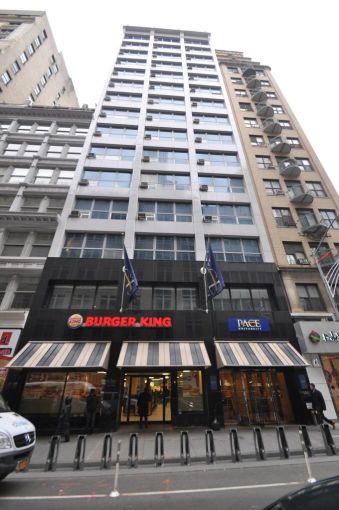 “On behalf of DSA Property Group we wish to extend our thanks to the team at Meridian,” Arik Lifshitz, the chairman and co-founder of DSA, said in prepared remarks provided to CO. “They structured a deal uniquely tailored to our risk tolerance. Despite our initial misgivings, Josh made us comfortable with the deal, and together with Ronnie walked us through a more complex process. We trusted Meridian to not only get us the best deal, but also the right deal, and they delivered.”

The 1910 building is slated for another reconversion: DSA “is planning a light renovation of the building to quickly bring the units to market at relatively affordable rents,” according to a NGKF release exclusively provided to CO about the sale. Pace had converted the once-office building into dorms in 1999. Burger King currently occupies the 3,543-square-foot retail space on the ground floor of the building, with a lease set to expire in 2020, according to data from CoStar Group.

The New York Post first reported in March that a Newmark Grubb Knight Frank team led by Kenneth Zakin was marketing the Financial District property between William and Dutch Streets for the university. At the time, it was estimated that the dorm could fetch up to $60 million, but the final sale price of the 75,000-square-foot property was $51.1 million. The sale closed on Oct. 6, NGKF indicated. The mortgage from Ladder carries a loan-to-value ratio of 88 percent. And the NGKF team also included Carol Ann Flint, David Falk and Kyle Ciminelli.

“FiDi is undergoing a shift from its original office/retail roots to a mixed-use neighborhood that offers a variety of residential options for the growing community and 106 Fulton Street presents a unique opportunity for the new owner to immediately repurpose an existing property to a new residential use,” Zakin said in the NGKF release. “Wrapping the southeast corner of Fulton Street’s cafes and shops and being perfectly centered between 1 World Trade Center and South Street Seaport, the building will provide tenants with a real neighborhood feel, while retaining the historical character of the financial district.”

A spokesman for Ladder Capital was not immediately available for comment.