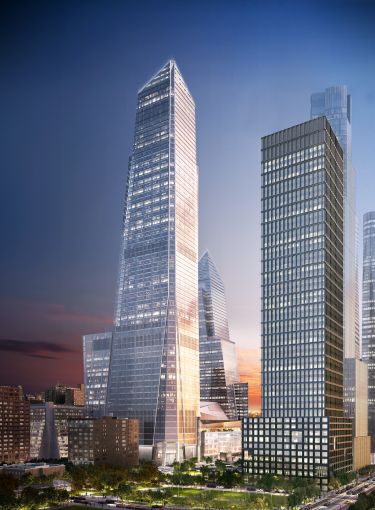 The firm will occupy the entire 68th floor of the planned 90-story tower, which Related and Oxford Properties Group hope to complete in early 2019. Asking rents in the building are north of $100 per square foot.

DNB expects to relocate from the MetLife Building at 200 Park Avenue South adjacent to Grand Central Terminal. The lease will run for 15 to 20 years, pending certain “conditions,” Bloomberg News reported, without elaborating.

“After more than 40 years in traditional Midtown Manhattan, we are very excited to be moving to the West Side and joining Related at 30 Hudson Yards, in what will be a wonderful, new, internationally significant building and a truly vibrant New York neighborhood,” Giacomo Landi, an executive vice president of DNB, said in prepared remarks. “We fully expect that establishing our new office space in Hudson Yards will help us attract and retain key talent.”

The move to Hudson Yards is part of DNB’s plans to modernize all of its office space worldwide, a process that began in 2012 with its headquarters in Oslo. There DNB relocated 4,000 people from more than 10 locations to one modern office complex. DNB has also moved its outposts in London, Singapore and Stockholm in recent years.

Don Preate and Frank Coco of Cushman & Wakefield represented DNB in the transaction, while Stephen Winter of Related represented the landlords. Preate and Coco did not immediately respond to a request for comment via a spokeswoman.

“We particularly appreciate the focus that DNB places on environmental stewardship and employee wellness, both areas we have invested in heavily,” Jay Cross, the president Related Hudson Yards, said in a statement. “DNB will complement our world-class roster of tenants.”