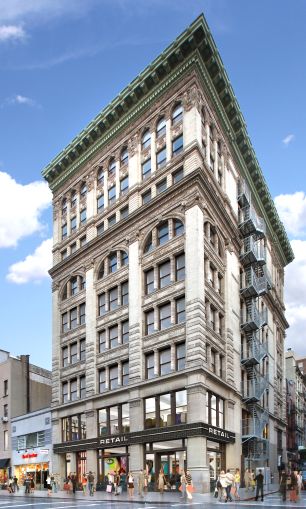 A purveyor of Italian goods has inked a deal to for a pop-up location at a corner location in Soho, Commercial Observer has learned.

Official Made in Italy, which sells Italian-made goods such as shoes and handbags by 30 different brands, will occupy 5,800 square feet at the base of 434 Broadway from this October through February 2017, according to information from the tenant’s broker. The six-year-old, Milan-based retailer will have 5,000 square feet on the ground floor and the remaining 800 square feet on the lower level of the building between Howard and Grand Streets.

Lisa Levitt of Nest Seekers International represented the tenant in the short-term transaction, and declined via a spokeswoman to provide the asking rent. Ground-floor asking rents on Broadway between Houston and Broome Streets averaged $824 per square foot in the spring, according to a retail report published by the Real Estate Board of New York this May.

“The Soho space at 434 Broadway is the perfect location for us,” Alessandro Violi, the chief executive officer of Official Made in Italy, said in a statement provided to CO.

Andrew Kahn of Cushman & Wakefield represented the landlord, Savanna, and declined to comment via a spokesman.

Official Made in Italy also plans to establish up pop-ups in Dubai, Hong Kong and London, according to Nest Seekers International.

Signing a short-term lease—typically less than a year—has become common practice for many international companies looking to get a foothold in the New York City market, as CO reported in May, giving them an opportunity to try out the region without a big real estate commitment.