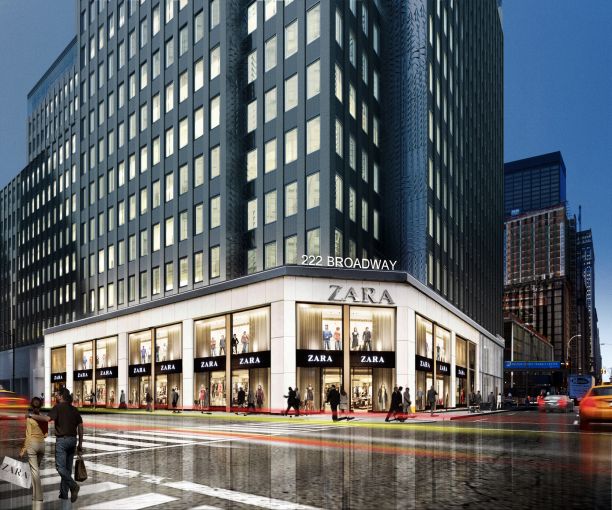 Rendering of the south view of 222 Broadway, home to Zara. Lauren Elkies Schram

Spanish clothes and accessories retailer Zara, which opened a three-story store at 222 Broadway in the Financial District last year, has leased nearly 10,000 square feet for storage, according to one of the brokers in the deal.

“The didn’t have enough stock space,” Cushman & Wakefield’s C. Bradley Mendelson told Commercial Observer. “It’s interesting because I believe the tenant underestimated the volume they are capable of doing in that marketplace. So they’re obviously doing well, which is a testimonial to the market.”

Zara has signed a lease for 9,900 square feet in the sub-basement in the 1961 office building, which is between Ann and Fulton Streets. The new space brings the chain’s square footage in the building to 40,100 square feet. The store spans the ground, second and lower levels.

Beacon Capital Partners and L&L paid Bank of America $230 million for the building in 2012, as CO previously reported. Boston-based Beacon sold its equity stake to Deutsche Asset & Wealth Management in 2014 for $502 million.