Under Construction: What’s Cooking at 199 Cook Street in Bushwick 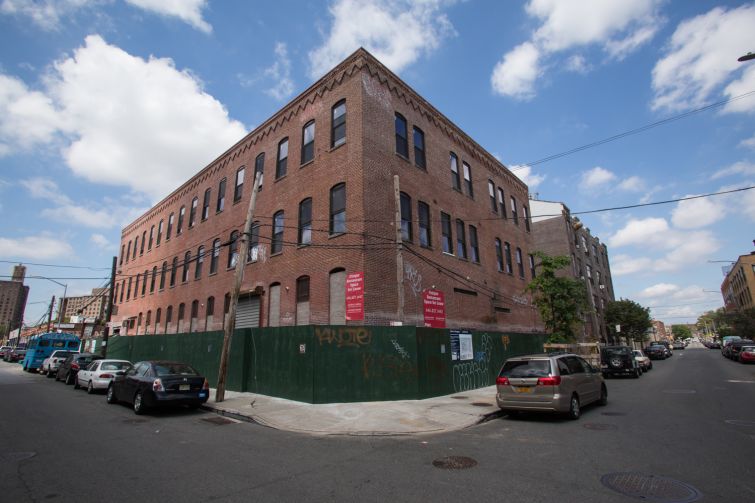 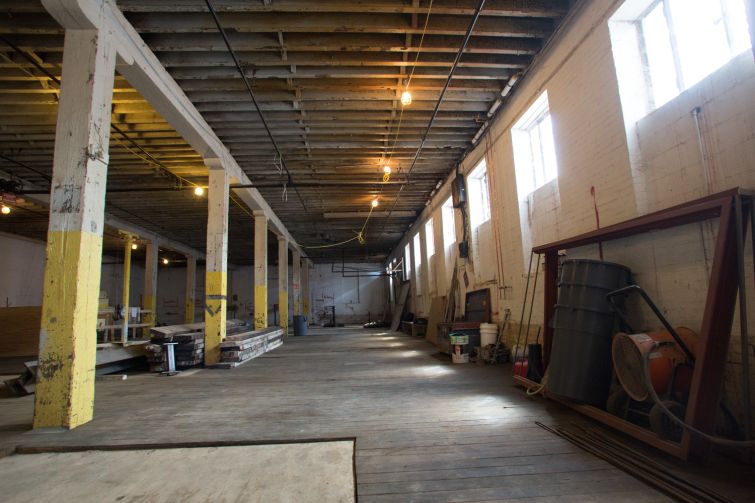 The Mann Group will put in polished concrete floors on the first level of 199 Cook Street, which will have gallery spaces (Photo: Aaron Adler /for Commercial Observer). Liam La Guerre 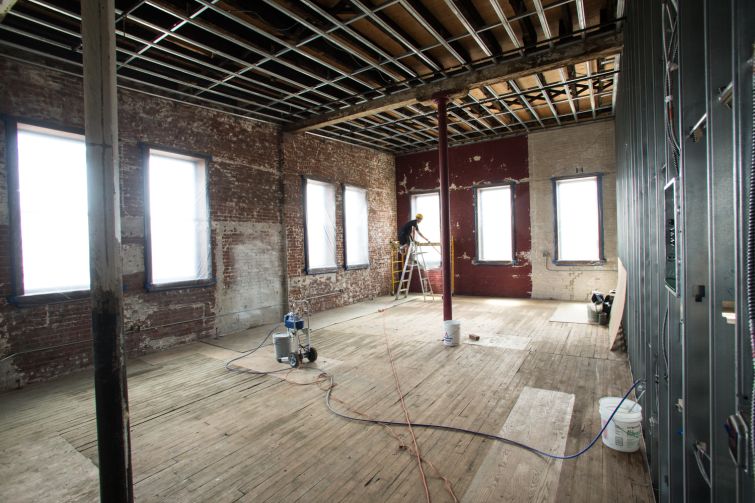 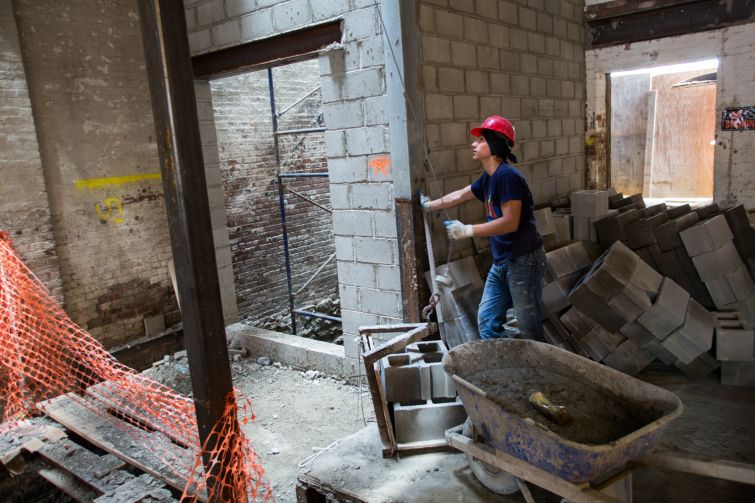 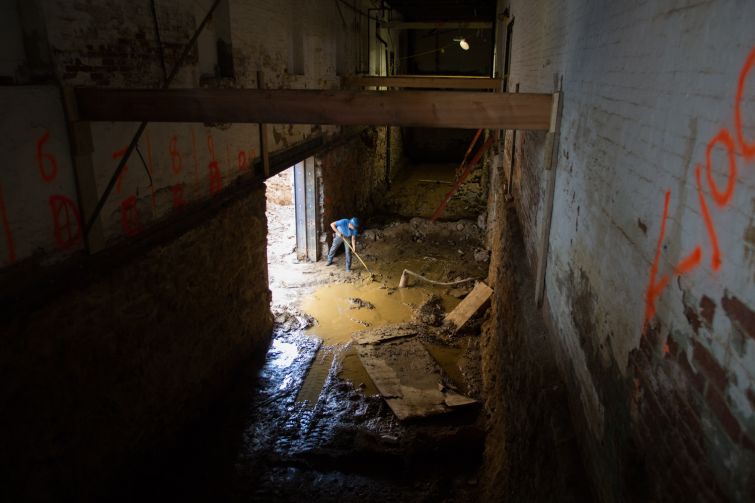 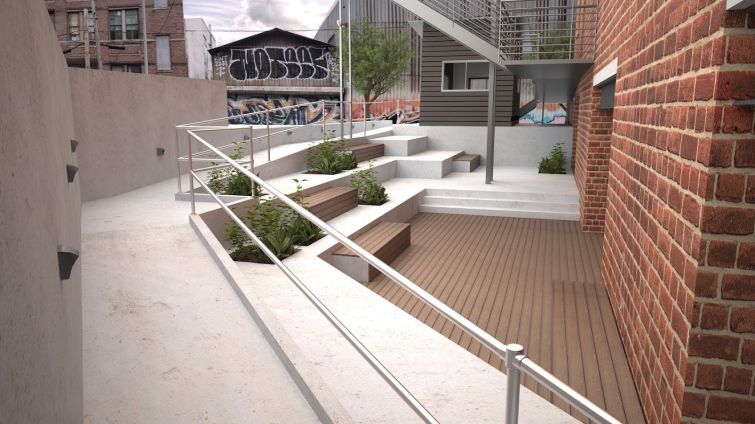 The planned outdoor community space will connect to the cellar of the building (Rendering: The Mann Group). Liam La Guerre 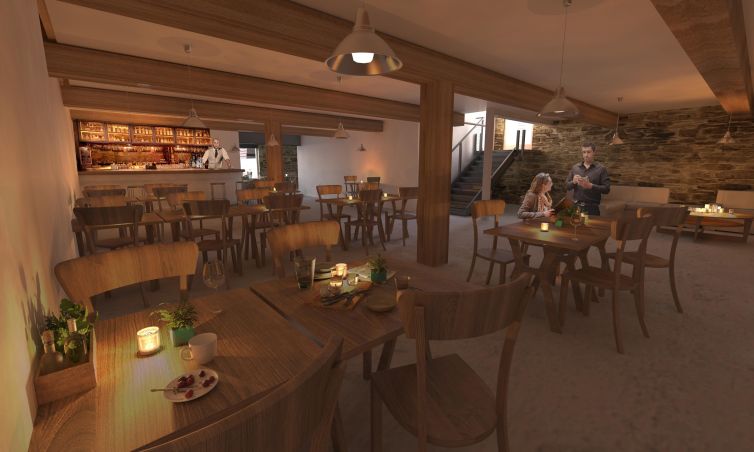 A rendering of the planned restaurant at 199 Cook Street (Rendering: The Mann Group). Liam La Guerre 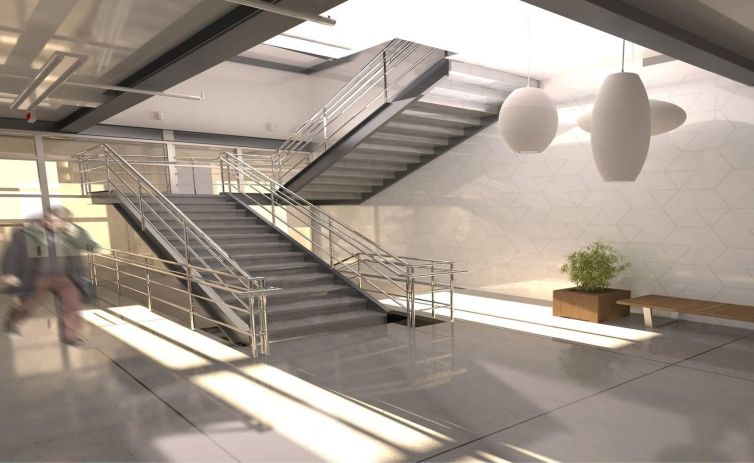 Rendering of the interior of the building (Rendering: The Mann Group). Liam La Guerre
Previous Next

The words “industrial” and “complex” are oftentimes separated by a scary “military” or a (scarier) “prison.”

But for a former warehouse at 199 Cook Street in Bushwick, the developers and designers have a better idea.

It’ll be an “industrial arts complex,” as Bryon Russell, a partner of Syndicate Architecture, calls it.

Russell designed the redevelopment of the building between White Street and Bushwick Avenue, which will feature office, gallery and retail spaces in a community-oriented layout with ample common space for, say, painters, sculptors, tech startups, architects, designers or you name it. The Mann Group, which purchased the roughly 35,000-square-foot building in June 2013 for $6 million, is also hoping that by retaining a bit of the industrial character of the building it will inspire the artists who call it home early next year.

“It’s a century-old building, so we’ve put a lot of care and love into restoring it along the way, while trying to find a use for it that is still about making something,” Russell told CO during a recent tour of the building. The concept of an “industrial arts complex” has “kind of been the theme to the ideas. That this is sort of the new face of local manufacturing.”

To accommodate hardcore artists, general contractor Busa Builders ripped out the old, mostly wooden elevator from the building and is preparing to install a larger industrial grade one that will be able to lift heavy art installations up the building’s three floors. On the second floor, there will be a cast iron tub in a shared bathroom that artists can use to wash their larger works.

To retain the industrial character of the property, Busa Builders refurbished the original wooden floors of the second and third levels, cleaned the red-brick façade of the building and took reclaimed wood from the building to create new window trims.

The nearly 18-foot-high ground floor will be sectioned into about five gallery spaces that range from 1,200 square feet to 1,500 square feet, while the second and third floors together will have about 28 offices of 350 square feet to 800 square feet. All spaces throughout the building have asking prices in the $40s per square foot.

Since they are expecting a lot of employees in the building, The Mann Group committed to bringing in a retail presence and common spaces. Busa Builders excavated the cellar, which will house a roughly 3,000-square-foot restaurant with 10-foot ceiling heights, and another to be determined retail. And they blew out the back wall there to make an open air seating amenity with plants, giving the artists a place to take a break and meet others.

Not every original detail in the building has been saved though. The landlord had to replace the entire roof when they found leaks—but this worked out well for everybody: The Mann Group is planning to add a rooftop lounge. And the wooden floors on the first level of the building will be replaced with polished concrete.

“In order to accommodate a restaurant [in the cellar] that’s going to have a DJ and stay open until four in the morning, we had to have acoustics and soundproofing and concrete,” said Eric Mann, the principal of The Mann Group.

The Mann Group, which is paying about $138 per square foot to redevelop the building, hopes to complete the entire project by February 2017.

In a twist from the norm of new office designs, spaces at 199 Cook won’t have glassy fronts or open layouts like, say, WeWork might. Instead offices will be walled in and have doors without glass panels.

“WeWork is an example of the open floor plan, but people do want privacy and their own spaces to work,” Mann said. “And then they want to collaborate. They want to come out and be part of the bigger thing.”