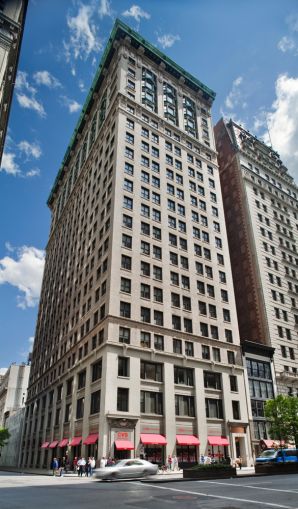 A pair of tenants have signed leases totaling more than 22,000 square feet at SL Green Realty Corp.’s 215 Park Avenue South, according to the landlord.

In the larger of the two transactions, Clique Media Group, which produces news about fashion, beauty, home decor and shopping for women, inked a five-year, 12,187-square-foot deal to relocate its New York City office. Starting in September, it will occupy a part of the 18th floor of the 20-story building between East 17th and East 18th Streets.

Clique Media Group, which was founded a decade ago and is headquartered in Los Angeles, is known for its blogs WhoWhatWear.com, Byrdie.com and MyDomaine.com. The asking rent in the building is $70 per square foot, according to a SL Green spokeswoman. It is moving from a building across the street at 200 Park Avenue South between East 17 and East 18th Streets, where it has a sublease of 5,150 square feet.

Joel Burris of Brown Harris Stevens, who brokered the deal on behalf of Clique Media Group, declined to comment on the deal.

In the other lease, Kimball Office, an international manufacturer and designer of high-end workplace furniture, renewed its 9,885-square-foot offices on a portion of the third floor of the building. The length of the lease is 10 years.

David Rosenbloom and Sebastian Infante of Cushman & Wakefield represented Kimball. Rosenbloom and Infante did not respond to a request for information via a spokesman.

The building is located near Union Square, one of the busiest areas and transportation hubs in the city, which contributed to why it was attractive to the tenants, according to SL Green’s news release. The landlord also upgraded various parts of the building, including elevators, corridors and bathrooms.

“These leases are a further testament to the continuing strength of the Midtown South market,” Steven Durels, SL Green’s director of leasing and real property, said in a prepared statement. SL Green’s Howard Tenenbaum and Gary Rosen represented the landlord in-house in both transactions.