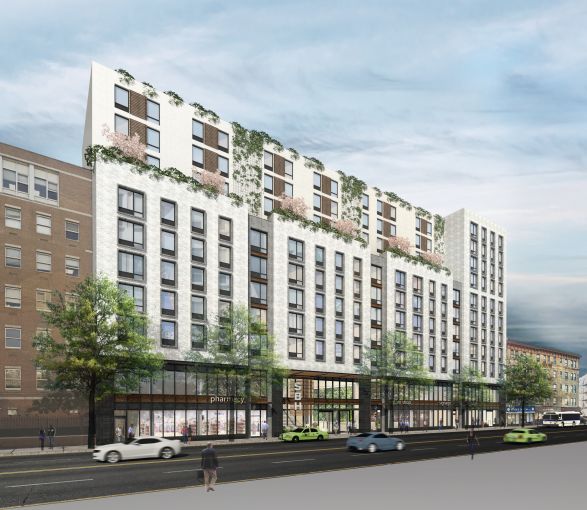 St. Barnabas Hospital has finalized its leaseback with the developers building two structures on land it formerly owned, property records with the city filed indicate.

SBH Health System, the company that operates the Bronx hospital, agreed to pay $13.3 million over the course of 40 years for a two-floor medical center built by a private joint venture, according to a lease agreement signed June 30 and recorded with the city on Tuesday.

St. Barnabas plans to use the roughly 57,000-square-foot office condominium on the ground and second floors of the building for an ambulatory center and for behavorial therapy. In addition to that, there is a 10,800-square-foot outdoor terrace, which will be used as a wellness center for stress-relieving activities like yoga, according to the project’s developers.

Hornig Capital and L+M Development Partners partnered to build 314 affordable residential units on two parcels of land that SBH Health System owned. The group bought the plots for a combined $7.1 million, property records indicate. They will be the site of a $156 million project to create housing and medical uses in the Belmont section of the Bronx, as The Wall Street Journal reported earlier this month. The lion’s share of the financing is coming from city and state loans, bonds and grants.

The ambulatory center that St. Barnabas is leasing will be in a two-tower building on a northern plot that has an official address of 4451 Third Avenue between East 181st and East 182nd Streets. Coming in at seven and 11 stories, the building will include 181 apartments, according to a press release from the developers. Roughly 10,000 square feet of commercial space is also being created for a pharmacy.

A spokeswoman for L+M said the project is slated to finish in 2018. Daren Hornig of Hornig Capital said the groundbreaking will take place sometime this summer.

The southern site, at 4439 Third Avenue, will feature 133 units in a 12-story structure, according to the release. There will also be an extended-hours day care, and outdoor space.

An SBH Health System spokesman said in an email that the nonprofit opted to sell the land to a private developer and do a leaseback because it took the financial risks off of the hospital. The population it services, he added, either uses Medicaid or doesn’t have insurance and suffers from a slew of illnesses.

“The hospital could not have been able to afford to build on this property or build out such a large space,” he said. “The hospital also wants to see affordable housing here as this is an area that has a large number of homeless.”