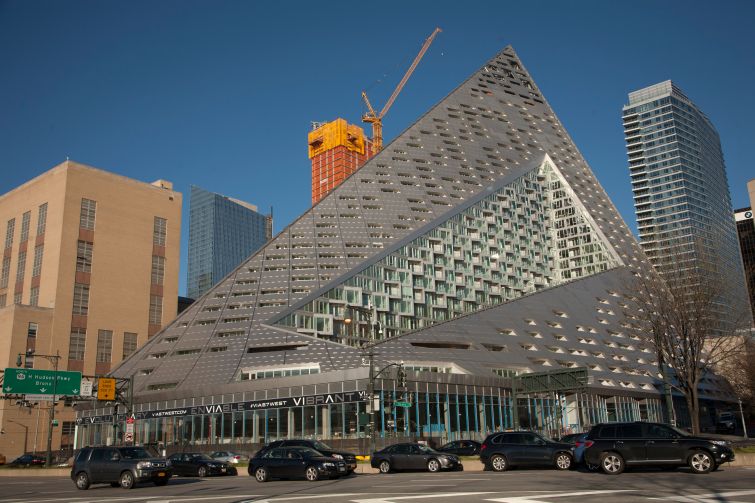 Landmark Theatres has signed a 30,000-square-foot deal to open at the western retail portion of VIA 57 WEST, the tetrahedron-shaped building officially at 625 West 57th Street between 11th and 12th Avenues, according to a press release from the landlord. The Los Angeles-based company will open in 2017 with eight screens and a private bar that will host filmmaker Q&As.

“We are thrilled to bring an iconic, storied theater name like Landmark Theatres to the thousands of residents, workers and tourists flocking to the area,” Durst President Jonathan “Jody” Durst said in prepared remarks. “Landmark is more than a theater, it is a cultural amenity and meeting place for our creative community and the film industry in New York City.”

The cinema will also feature leather electric reclining chairs, a wood and stone bar and laser projection technology, according to The Wall Street Journal, which first reported news of the deal. A Durst spokeswoman declined to provide the asking rent and the length of the lease.

Landmark Theatres will be the first Midtown Manhattan movie theater to open in 15 years, according to the release. “Simply put, this theater will be a game changer,” Ted Mundorff, the theater’s president and chief executive officer, said in a statement.

This is the third retail lease that the landlord has signed for the building’s sizable retail portion. In March, Durst announced it inked a deal with the American Kennel Club to open a grooming, training and pet care center in 4,000 square feet, as the Journal reported at the time. Livanos Restaurant Group, which has six locations in Manhattan and one in White Plains, N.Y., signed a 7,000-square-foot deal to open an eatery at the Far West Side property, as Commercial Observer reported in September.

Update: This story was edited to include the brokers in the deal.