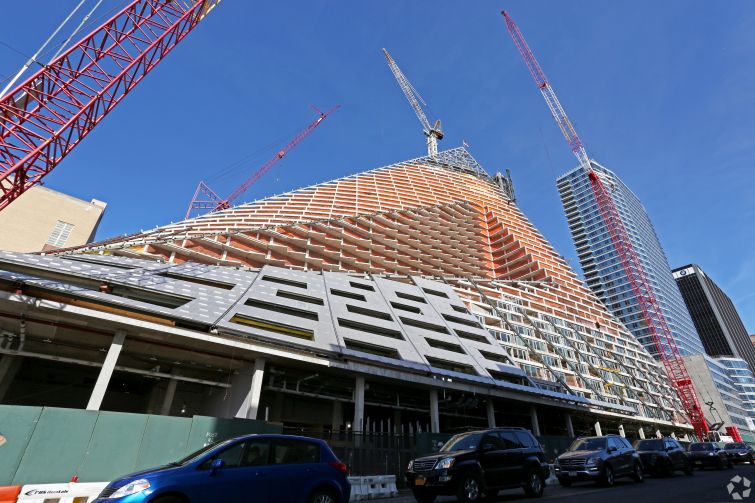 The Durst Organization’s tetrahedron-shaped residential building on the Hudson River on the western end of 57th Street’s “Billionaire’s Row,” has its first retail tenant.

The asking rent in the 20-year deal was not immediately available. Peter Braus and Brad Schwarz of Lee & Associates represented both sides of the deal, and Durst was also represented in-house by Tom Bow and Ashlea Aaron.

“We’re pleased to partner with the Durst Organization on a project that we envision bringing fresh energy to the area,” said Nick Livanos, the restaurant group’s owner, in prepared remarks. “We’re looking forward to joining forces and playing an integral role in the development of the area by offering our signature hospitality and a place for residents and visitors to gather.”

The deal also marks the emergence of a residential neighborhood out of a once desolate zone for shipping depots and auto dealerships. With the development spree along 11th Avenue in the recent years, dealerships that lease ground floor space have found themselves running out of options when it comes to expansion, relocation or even lease renewal, as CO reported in May. Durst at the time said it was still considering an auto dealership for a portion of the building’s extensive retail portion.

A Durst spokesman said today that a dealership is still in consideration after signing Livanos to the building.

The Bjarke Ingels-designed building will feature 709 rental units when it’s done in 2016, of which 142 apartments will be affordable with the remaining 567 apartments at market rate. It’s one of three developments the landlord is building between 11th and 12th Avenues and West 57th and West 58th Streets. Both the HELENA 57 WEST and the FRANK 57 WEST, named after Douglas Durst’s daughter and grandson, respectively, finish up the residential “superblock” the developer has created on the Far West Side. FRANK 57 WEST is slated to finish next year, while HELENA 57 WEST was completed 10 years ago.

Durst signed a 99-year ground lease at the site 15 years ago, according to The New York Post, which first reported the news of the Livanos lease. The site was originally zoned for manufacturing; Durst at one point considered an office tower for the property.