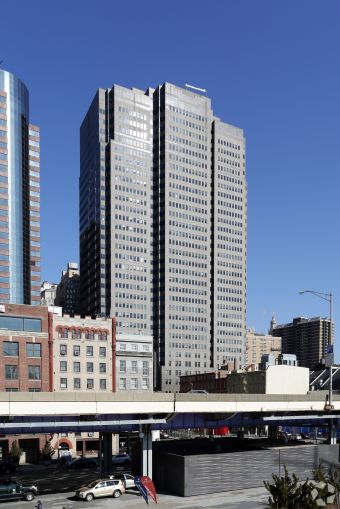 AXA Equitable Life Insurance Company has provided $295 million in debt to Jack Resnick & Sons for the family-run firm’s 35-story office tower, One Seaport Plaza, at 199 Water Street, according to documents filed with the city today.

The new debt from the life company is being used to refinance $240 million loan provided by Morgan Stanely in 2007, and gives the borrower an additional $55 million in financing, mortgage documents show.

The Resnicks developed the 1.1-million-square-foot building in 1984 and it was designed by Swanke Hayden Connell Architects. The property sits between John and Fulton Streets in South Street Seaport.

The average floor plate is 36,000 square feet, and tenants include AON Service Group, Allied World Insurance and SCOR Insurance, according to the building’s website.

The Singer & Bassuk Organization brokered the financing on behalf of Jack Resnick & Sons.