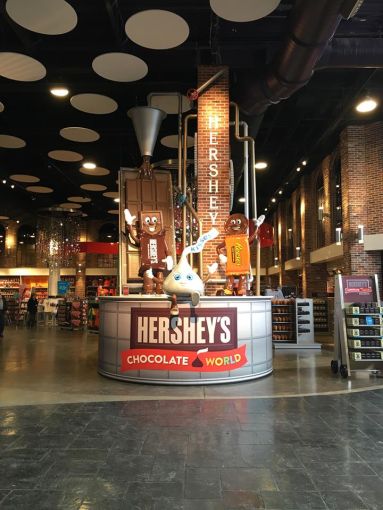 The Hershey Company just wrapped up something sweet that’s not dark or sugary: a new lease.

Hershey, which makes more than $7.4 billion in annual revenue, did not disclose the size of the new location, but said it will be three times as large as its current 2,200-square-foot store at 1593 Broadway between West 48th and West 49th Streets.

The candy maker’s new digs will only occupy the ground floor of the future 350,000-square-foot building, also known as 20 Times Square, according to Avison Young, which completed the deal on behalf of the tenant.

Hershey’s current Times Square store opened in 2002 and is just one of the 120-year-old company’s eight retail locations in the world. Construction of the new store will begin early next year; it is expected to open in late-2017.

“We are thrilled to expand our Hershey’s Chocolate World presence in New York with a new, larger flagship store in the heart of Times Square,” Suzanne Jones, a vice president at Hershey, said in a news release. “Our vision is to create a destination where people of all ages can interact with our iconic brands and immerse themselves in all things chocolate.”

The asking rent in the deal was not immediately clear. However, asking rents in the Times Square area fell in the second quarter to $2,109 per square foot from $2,508 per square foot year-over-year, according to data from Cushman & Wakefield.

The building, owned by Steven Witkoff’s The Witkoff Group, is being developed into a 452-key Edition hotel. The National Football League meanwhile is opening an interactive store in a 40,000-square-foot space, spanning the ground, second and third and fourth floors of the building, as Commercial Observer previously reported. Calls and an email to Witkoff and his company were not immediately returned.

“We negotiated to have two entrances for Hershey, one adjacent to the NFL Experience on

Seventh Avenue and another on West 47th Street, adjacent to the Edition hotel,” Avison Young’s Jedd Nero, who represented Hershey’s with CBRE’s George Maragos, said in prepared remarks. “The combination of Hershey’s Chocolate World retail experience, NFL Experience, the Edition hotel and others to be announced, will attract millions of people per year.”

Sherri White, an executive vice president at Witkoff Group, represented the building in-house in the negotiations.