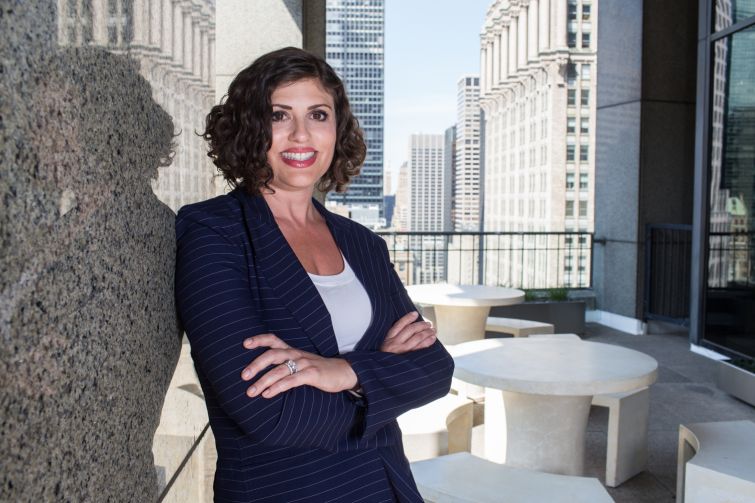 Four years ago, Amira Yunis was fighting a deadly type of cancer. Today, her battle skills are dispatched on behalf of clients like Aldo, Fossil, Joseph Peday, APF Properties and Callahan Capital Properties.

“Toughness” seems like one of the words that would best apply to Yunis. (Her two favorite TV shows: Vikings and Game of Thrones. The limp in her walk: a battle scar from the struggle with cancer.) But other words like “creativity,” “speed” and “beauty” come to mind.

Yunis and her four-person team at CBRE (three holding a broker’s license) repositioned Steinberg & Pokoik’s 575 Madison Avenue two times in the last 15 years, including buying out tenants and combining retail units to lease a 7,000-square-foot space with a double-height ceiling to luxury Swiss watchmaker Breitling for its new flagship store.

On behalf of Urbanspace, Yunis secured 10,600 square feet at RXR Realty‘s 230 Park Avenue for the tenant’s first storefront following the success of the company’s pop-up markets like Madison Square Eats. And she is working on increasing the U.S.  presence of T2, a high-end Australian tea company, as well as for Joe & the Juice, a Denmark-based juice bar.

Yunis, a former Ford model, is married to Dudley Hancox, a financial adviser at Morgan Stanley, who picked her up on a subway (no joke). They live on the Upper West Side and have a second home in Ocean Grove, N.J. She has a son in his 20s and stepchildren ages 16, 19 and 21.

The 46-year-old executive vice president with the firm’s retail services group sat down with Commercial Observer in her office at the MetLife Building, at 200 Park Avenue. She talked about how she recovered from the illness (despite being given a 20 percent survival rate), the type of food halls that will cut the mustard and how retailers are evolving to survive.

CO: Prior to joining CBRE, you were a partner at what is now Newmark Grubb Knight Frank. How many partners were there?

Yunis: I think there were 12. Maybe nine or 10 originally, and then myself and Jeffrey [Roseman] were the only retail partners. I was the only woman that ever made it into partnership. They changed the structure of the whole company, so I don’t think there are any partners any more.

How long were you there?

I was there for about 12 years, and I came here five years ago, this December.

What percentage of your clients are tenants versus landlords?

It depends on the year. I’d say it’s pretty even.

Is Urbanspace looking for other opportunities in New York City?

Yes, we’re surveying what the options are. Finding the right space for them [is not easy because] it’ll be a large location.

Which clients do you spend the most time working with?

What tenant types are doing the most deals?

Are these landlords seeking restaurant tenants because retail is slowing or were they planning for restaurants all along?

On the tenant rep side we are seeing landlords that are considering restaurants that were not considering food earlier. When you have a million-square-foot office building, the people in the building want to have a good experience; they want to have somewhere to go where they can eat.

How does one do a successful food hall when there are so many?

Location, authenticity, putting your heart and soul into something.

Do you think there is room for more of them?

Well, if you look at traditional smaller delis, if they don’t offer different types of options—healthy and different types of food—[they might close] because [people] want choices. We’re used to getting on our phones and clicking on an app and getting what we want.

I think we live in a world now where we’re just used to having satisfaction. And it’s the same thing with retailers. They have to be creative in the way they give their customers an experience—a pleasant experience. And make things really easy for them by shipping their goods right to their door so they don’t have to carry them home. This is the way they’re going to have to evolve.

Have you seen anyone doing that yet?

Retailers are absolutely looking at many different ways to ship immediately. We hear from several different retailers that they’ve opened up shops around the city where they can deliver from many different locations, so they’ve got [delivery] down to the same day if not the next day. [Another thing retailers can do now is] change the color of the shoes or the clothes that you’re trying on so you don’t have to actually change the clothes. You put on one top, and then you click a button. A lot of them are working with their cellphone app so you can walk around the store. In the future, you’re going to be able to see which store has your size.

Has anyone implemented this technology?

I believe that some of the first places that these will be implemented—and you can speak to these landlords—is the World Trade Center and the [American] Dream [Meadowlands] mall in New Jersey.

They need to create an app so you don’t even have to go into the store to try anything on.

But that’s not good for anyone in the room. (Laughs)

Are your landlords dropping rents?

I work for very intelligent landlords that are about making deals.

So that means yes, they’re willing to cut prices?

I try to work with landlords that are realistic because it’s not just about signing a deal—it’s about having the retailers stay in business. It costs landlords a lot if they lease a space to somebody and then their concept fails.

Where were you before Newmark?

How did you go from modeling to real estate?

When I moved to New York, 21-ish years ago, I started to rent apartments. I had always kind of been interested in real estate, but it wasn’t a big focus in Minnesota. So I started to work for a very nice family that had a [residential] real estate company in Queens. They were called LTD Real Estate.

Yeah. I was quite successful at it, and I was pretty young making quite a bit of money.

Why did you quit modeling?

I started doing really well in real estate, and I had taken a class, and they talked about how much you make when you’re an office leasing broker. So I went back to my office and announced that I want to be an office broker. They said we don’t know how to do that, and I said you just find a tenant and a space. Within a few months I made a $40,000 commission, and that was a lot of money.

You were sick with cancer for a while. Tell us about that.

In July 2012, I woke up with incredible pain in my lower back and leg. After a period of time I was diagnosed with sarcoma, which is a bone tumor. It has a very long name—undifferentiated spindle-cell sarcoma.

So you just woke up one day in pain?

I hadn’t been feeling well. But I went to stand up, and I couldn’t walk, and that was it. There was no walking after that. I injured my femur.

I went through tremendous amounts of chemotherapy. And you become immobilized—you cannot walk.

Two years. Basically they have to take it out, there’s no other way. It’s not like a type of blood cancer that they can cure with leukemia. It is a very aggressive type of cancer. I did more than 12 rounds over a few months, which is a tremendous amount of chemo; most people do two to three rounds. And then I had to go through another 12 rounds of chemo, so 24 rounds of chemo—because it is a very resilient cancer. So they bring you to the brink of death. And then I did a 22-hour surgery on my leg [for] the mechanics and transplants and everything. It was a revolutionary surgery that they were not sure how well it would work because it mixed transplants and mechanics. In the past it [was] always amputation. It’s a very fast, deadly cancer and usually you only live for a few months. So…after two years they consider you cured because it’s extremely aggressive.

You’re lucky to be walking.

Yes, very lucky. I can walk, do all my tours, do everything… I always believed that I would be okay and that I would be better. I didn’t Google anything on the internet about it—I did it once, and it was absolutely terrifying. I tried to stay very positive, and I have amazing friends and family. Chemo is brutal and sarcoma chemo is extremely brutal. Everybody reacts differently. Someone else who had the surgery might not have been able to walk again. Chemo really affects your balance. I’m lucky; I go to physical therapy three or four times a week.

Today you’re walking, which is a miracle, but do you have hindrances?

Yeah, I’m not going to go jogging. I’m not going to run down the street. I lift weights, but I’m not going to be dragging 20-pound bags. Humans beings are amazing, and you can learn to adjust to anything. I work for the Sarcoma Foundation [of America]. There are a lot of people I help that have had amputation or serious side effects from the sarcoma. When you look at how people change and adapt to their circumstances, I consider myself very blessed, very lucky that I can walk because I talk and deal with a lot of people from the Sarcoma Foundation that cannot walk.

What do you do for the foundation?

I’m a part of the board and I also put together the gala. It’s a lot of work. I didn’t know what sarcoma was before I got it. It’s been interesting. It teaches you a lot about life, who you are, what you can overcome and what is important.

How did it change your perspective on work?

I learned to focus on positive things and to focus more on what was extremely important and that goes for negotiations. What is your endgame? Your goal is to do xyz and how do you accomplish that without focusing on things that aren’t as important to get you to where you want to go?

You can weed out the distractions.

That is what you learn when you’ve been very ill, and with chemo you get tired though I’m not tired anymore. You think, If I can do five things today, what are those five things I have the energy to do?