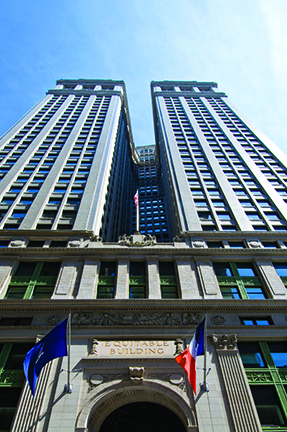 The Brennan Center for Justice is heading to the Financial District, taking roughly half of the 17th floor at Silverstein Properties’ Equitable Building at 120 Broadway.

Commercial Observer has learned that the nonprofit affiliate of New York University School of Law has signed a 15-year deal for nearly 25,500 square feet at the 40-story tower. The 1.9-million-square-foot structure takes up a full block from Broadway to Nassau Street and between Pine and Cedar Streets.

“We are pleased to welcome the Brennan Center for Justice to the prestigious tenant roster at 120 Broadway,” Roger Silverstein, the vice president of leasing for Silverstein, said in prepared remarks. “Located in the heart of Lower Manhattan, the property offers tenants all the services and conveniences of a modern, first-class office building with the distinction of historic architecture.”

Asking rent in the lease was in the mid-$50s per square foot, according to a source familiar with the deal.

The democracy and justice advocacy group will move to the 101-year-old building at the end of 2016. It will leave behind its longtime digs at 161 Avenue of the Americas between Spring and Vandam Streets. Brennan Center has been in about 18,500 square feet at the building for the last 15 years, another source with knowledge of the deal said.

Silverstein represented the landlord in-house with colleagues Joseph Artusa and Camille McGratty, while Stephen Eynon of CBRE represented the tenant. Eynon declined to comment via a spokeswoman.

The New York State attorney general’s office occupies nearly 389,000 square feet at the building in a lease that expires in 2018, according to CoStar Group. United Synagogue of Conservative Judaism, a nonprofit that supports synagogues, signed a 16,000-square-foot deal last summer in its move Downtown from Midtown, as CO reported last July.