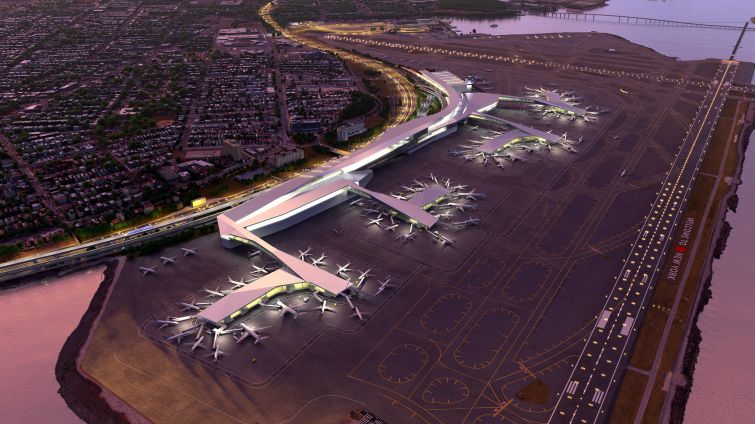 The consortium of developers selected to build a new Terminal B at LaGuardia Airport has officially entered its 35-year lease with the Port Authority of New York & New Jersey, Gov. Andrew Cuomo announced today, and work on the $4.2 billion project is expected to begin this week.

LaGuardia Gateway Partners—which is made up of six companies including Skanska, Meridiam Infrastructure and Vantage Airport Group—officially closed today on its financing following a $2.5 billion tax-exempt bond issuance through the New York State Transportation Development Corporation, a subsidiary of the Empire State Development Corporation. It is one of the largest bond issuances of its kind and, according to Patrick Foye, the executive director of the Port Authority. The debt was 10 times oversubscribed, according to officials, a sign that there was strong interest in the financing.

The consortium will also kick in about $200 million of private equity, Foye said. The Port Authority will contribute to the project with passenger facility fees—a Federal Aviation Administration-approved tax on airline tickets that funds transportation infrastructure projects. Commercial Observer reported in March that the contribution through those fees would be about $1 billion.

Under the public-private partnership agreement, LaGuardia Gateway Partners will demolish the existing Terminal B, build a new 35-gate terminal closer to the Grand Central Parkway and manage the property. Moving the property closer to the parkway creates about 20 acres of space, Foye said. The consortium is paying for the bulk of the project through debt and equity and will manage the new terminal to make its money back.

Putting the development in the hands of private companies allows the Port Authority, which controls the ground at the airport, to reduce its risk in the costly project, Foye said. Skanska, which has a AAA credit rating, will assume responsibility if the price estimate on the project is wrong, he added, taking the onus off of the bi-state agency.

Cuomo, who has announced billions of dollars in infrastructure projects since January, said using a public-private partnership with the developer assuming responsibility on major projects is a model New York State would use going forward.

“Government does not build well,” Cuomo said. “They are not experts at construction. It’s a separate expertise, especially building an airport, building in New York City, building a complicated structure. The days where you see a government agency with a shovel in its hand and driving a backhoe, those days should be over as far as I’m concerned.”

The Port Authority approved the plan on March 24 despite some debate over whether the project cost $5.3 billion because work between 2004 and earlier this year was factored into the project. Foye and then-Vice Chairman Scott Rechler, both New York appointees, argued that the inflated cost was inaccurate, while Chairman John Degnan, a New Jersey appointee to the agency, said the earlier costs should be factored in. Foye said today that the true price tag of the project was in fact on the lower end.

“The cost of the project is $4 billion,” Foye said.

Demolition work will begin this week, Foye said, and the first passenger concourse should be finished by 2018, followed by the terminal building at the beginning of 2020. That will be followed by the second concourse in August 2020. The airport will continue to operate throughout the project.

Using these types of bond is not uncommon for public works project of this magnitude. American Airlines issued $1.2 billion in bonds between 2002 and 2005 for its work on a new Terminal 8 at John F. Kennedy International Airport, which was fully finished in 2008. The airline recently refinanced $882 million of that debt with about $900 million in new bonds issued by the NYS Transportation Development Corporation, as CO reported in May.

The Terminal B announcement is the first component of what’s expected to be a larger overhaul of LaGuardia Airport. Cuomo and Vice President Joseph Biden announced a soup-to-nuts rebuild of LaGuardia last summer (the Terminal B project predated that announcement), which will require a new Terminal C and Terminal D, both of which are controlled by Delta Airlines.

“We’re meeting with Delta on a regular basis,” Foye said. “It’s a major priority of the Port Authority and Delta both. The project is being worked hard and on a daily basis.”

Cuomo and Foye also addressed that the Port Authority has been coordinating with the Metropolitan Transportation Authority on plans for an airtrain between the Mets-Willets Point stop of the Long Island Railroad and LaGuardia. The MTA will operate the train, Cuomo said.

“The airtrain is important because we have to get out of cars in this metropolitan area,” Cuomo said. “If you want to see this region grow, it can’t be based on more vehicle transportation. It needs to be based on an advanced mass transportation system.”